What’s On Your DVD Shelf? 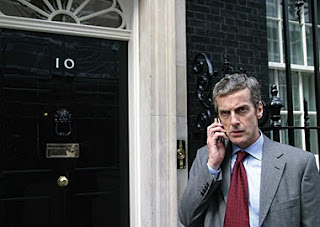 This month we take a peek at the DVD collection of The Thick of It’s foul-mouthed political spin doctor Malcolm Tucker.

The Thick of It is an exceptionally dark and rather brilliant political comedy set in the corridors of British government. Throughout the series we are given a satirical behind the scenes glimpse highlighting the struggles of the media and spin doctors against civil servants in government. The Director of Communications at Number 10 Downing Street is the formidable and feared Malcolm Tucker (Peter Capaldi). He serves two main roles: acting as the Prime Minister's enforcer to ensure the cabinet ministers all follow the party line, and managing the government's crisis management PR- usually in the form of spin. He regularly uses smears or threats of violence to achieve his ends. You don’t want to mess with him.

Whilst usually seen shouting, nay, SCREAMING profanities and threats into the faces of his inept colleagues, Tucker is really the only character in this series that has a clue about anything. He likes the fact that people don’t like him and is often seen with a throbbing vein on his forehead and an evil glint in his eye. We are given a rare glimpse into his private life in series 3 when he takes a holiday. Inviting a few friends over to his home, he cooks dinner and appears a little more relaxed than usual. One of the scenes features a shot of his DVD collection in the background as he and one of his guests chat… I couldn’t help but pause to sneak a closer look at his collection and begin to think how this would make for an interesting and new regular feature at Behind the Couch: inspecting the DVD shelves of various TV and film characters. What kind of films does Malcolm Tucker watch to unwind after a stressful day keeping the government from self-destructing? Let’s have a look. And let’s be honest – we’re obviously going to judge him on the basis of his taste in film. 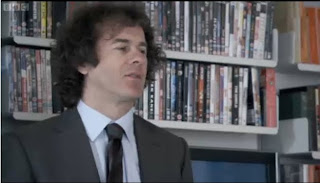 A love of British crime caper/thrillers is exhibited thanks to the presence of The Italian Job and Layer Cake, whilst a softer side is also hinted at by the inclusion of Atonement – or perhaps Malcolm is just really into beautiful cinematography. Tucker also appears to appreciate classic cinema with titles such as Citizen Kane and the modern classic Memento – which goes some way to excuse the fact that he actually paid money for a copy of The Day After Tomorrow. Hey, I’m as big a fan of Emmerich’s intimate-epic apocalypse-fest as the next person – I watch it every time it’s on TV and even know some of the lines by heart – but I would never, EVER pay money to own a copy of it. Other big budget disaster extravaganzas include the extremely conspicuous Titanic. This is perhaps the most shocking revelation of Malcolm’s taste in film. Or is it? Titanic is one of the most successful films ever produced. Laden with ground breaking special effects and lavish attention to detail, it topped the box office for what seemed like an eternity. Perhaps Malcolm’s morbid curiosity just got the better of him? Or maybe, just maybe, he's a romantic at heart. Or a fan of James Cameron's work.
The foul mouthed Director of Communications evidently enjoys a laugh and maybe even has an iota of ‘fan boy’ hidden away behind his surly demeanour – I spy copies of Shaun of the Dead and Hot Fuzz.

Horror doesn’t really have much of a presence in his collection – perhaps Malcolm’s day to day life is horrific enough without his means to escapism becoming soiled with viscera too. His taste in horror seems to be represented by lone horror title The Thing – kudos! If you only own one horror title, it may as well be something as cool as John Carpenter’s seminal classic.

And there we have it. Malcolm Tucker, you have been judged on account of your eclectic DVD collection and found guilty of owning some really unexpected titles and also some really good ones. And ones that are just so innocuous they don’t even register. I’m reckoning he is a big fan of cinema.
DVD Shelf Malcolm Tucker The Thick Of It