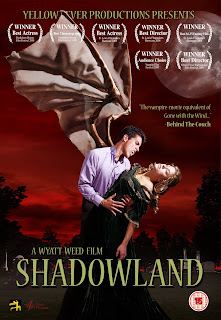 Wyatt Weed's vampire epic Shadowland is released to DVD this month courtesy of Yellow Fever Films... Weed’s low-budget and fun feature debut follows the plight of Laura, a young woman who emerges from a makeshift burial ground during a raging storm, with no idea of who she is or how she got there. Is she reincarnated? Resurrected and risen from the grave? As she makes her way across the city – seemingly drawn to a particular part of it – Laura begins to slowly piece together her story; all the while hiding from someone who seems intent on killing her at all costs.

Yellow Fever DVD Distribution is an independently owned and managed firm that is run by film makers - for film makers. Over the next few years, their aim is to bring a mass number of the best independent films from around the world, to DVD for everyone to enjoy.

"As independent film makers ourselves, we know how hard it can be to get your work out there to a bigger audience with todays market swamped by bigger budgeted projects. So our mission is to give other indie film makers a fair deal in a bid to show their work to the world. Along with our own movies, we hope to find the best of the best and extend the Yellow Fever catalogue in many area's. We also hope to bring back the glory day's of yesteryear when independent films had a place in the cinema, and take what's on our label, to the big screen..."

Shadowland star Carlos Antonio Leon is in Belfast this week to promote the film. He'll be appearing in Belfast's HMV store this bank holiday Monday from 12pm - 3pm, for a special signing of the DVD. Come in and say hi and snap a photo while you get your copy signed and possibly walk away with some free goodies.
Indie Film Low Budget Shadowland Vampires Wyatt Weed

I Like Horror Movies said…
Will they be releasing everything in R1 as well? Been looking forward to this one since you first reviewed it!
4 May 2010 at 02:07

James Gracey said…
Hey Carl - just dropped the Yellow Fever guys an email to enquire about this for you - not sure if they'll be organising the R1 release, but I'll let you know what the story is when they get back to me!

I Like Horror Movies said…
Awesome thanks dude, I was expecting more excitement when i got back here to double check, how can anyone not be impressed with those sweet ass pics and your review? I hope the film picks up steam after the release!
8 May 2010 at 01:30