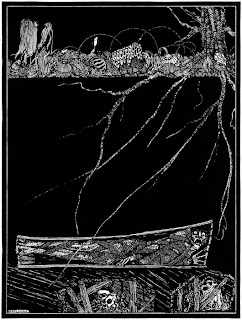 After being victimised by not one, but two other bloggers (thanks Chuck Norris Ate My Baby and Fascination With Fear!), I’ve been coerced into continuing on with the recent ‘meme’ pandemic, in which bloggers are urged to come up with a series of screen grabs, all focusing on a specific theme. So, after MUCH procrastination I decided on the theme of premature burial in horror movies. Natch.

The fear of being buried alive is an ancient, primal one. Man’s preoccupation with this, most ghastly of fates, can be traced back throughout the ages in literature, art, film and of course, documented historical fact - perhaps the reason why this fear is still so rife and so universal – because it is rooted in truth. Of course, this darkest of fates has been represented in cinema too, particularly in the dark visions of horror cinema…

The subject is of particular interest to me (not just because I’m a morbid puppy with a severe melancholic disposition) but because of my (albeit tenuous) connection to one such case in my home town, Lurgan, Co Armagh. My mother and her sisters grew up in the local graveyard house – my grandfather was the caretaker (perhaps the source of my obsession with horror?). He, and indeed many adults in town, regaled tales of a local ‘bogey-woman’ by the name of Margorie McCall - whose body was buried in the very cemetery where my mother grew up (Shankill) – to keep naughty children in check. McCall was a resident of the town in the mid 18th century and her grave was no ordinary one – to this day it still bears the inscription –

Her story is still a popular one amongst townsfolk today - many times I myself have stood at her graveside and pondered, weak and weary, her tale (told you I was morbid). After a little research it became obvious to me that tales such as McCall’s were rife throughout Europe. Therefore it is impossible to say with any authority that this tale is true – however her gravestone is still there in Shankill graveyard today, and still bears the inscription. I for one would like to believe it is true. If only because it had a (sort of) happy ending…

Anyway. On with the meme…

Anonymous said…
Love it! Such a great choice. Having recently seen the trailer for "Buried" and viewing the grave digging scene in "Drag Me to Hell", I realized this particular fate gives me the willys!
12 August 2010 at 01:04

Anonymous said…
Great images! I think this would be one of the worst ways to go, along with being eaten alive, burned to death, or having to watch Full House reruns on a continuous loop for 3wks.
Dreaded Dreams
Petunia Scareum
12 August 2010 at 02:26

Matt-suzaka said…
And the reason I picked you, James, is I knew you would do something great, but instead you did something that is simply awesome! Love the story...it makes your meme quite unique and makes me think we would have a great time hanging out with one another!
12 August 2010 at 03:17

Christine Hadden said…
Nice! Got me really anxious to see the upcoming 'Buried'... and to revisit some Poe :o)

And that story about the woman from your hometown - sounds like the makings of a really good movie (nice article by the way)!
12 August 2010 at 04:15

James Gracey said…
@Spooky Vegan - cheers! And good luck with picking your theme - I look forward to seeing what you come up with. :)

@Kristy - I tried to find some images of ol' Kiefer six feet under, put alas I couldn't! Otherwise, your wish would be my command... :)

@Morgan - Yeah, just the thought of it makes me feel so frantic! It was quite a challenge trawling through google image search 'premature burial'. But one I simply had to rise to! ;)

@Petunia - Yeah, this and SHARKS. Doesn't bear thinking about. :)

@Matt - Thanks Matt, very kind of you! Glad you liked it - and yeah, we would indeed have a great time hanging out with one another! :)