A Serbian Film is set to hit UK cinemas, after an incredible storm of controversy, on 10th December, and is unleashed on DVD and Blu-ray on 3rd January 2011. Thanks to the lovely folks over at Cult Labs, Behind the Couch has an exclusive trailer of the movie...


Scripted by Serbian horror film critic Aleksandar Radivojevic (screenwriter of the award winning Tears For Sale), the debut feature from director Srdjan Spasojevic is an allegorical, taboo shattering film that “follows French cinema pioneers Gaspar Noe (Irreversible) and Virginie Despentes (Baise-moi) in destroying the status quo regarding on-screen violence and sexuality” (Tim Anderson, BloodyDisgusting.com). A twisted tale of an adult film star’s horrifying descent into an almost unimaginable hell, Radivojevic himself describes the film as “a diary of our molestation by the Serbian government… It’s about the monolithic power of leaders who hypnotize you to do things you don’t want to do.”

Encouraged by his wife to accept the job, Milos turns up for the first day of shooting and is immediately drawn into a maelstrom of unbelievable cruelty and mayhem devised by his employer, the ‘director’ of his destiny.  It soon becomes apparent that Vukmir and his crew will stop at nothing to complete his insane vision. The only way for Milos to escape the living cinematic hell he’s entered and to save his family life is to sacrifice everything to Vukmir’s art – his pride, his morality, his sanity, and maybe even his own life. 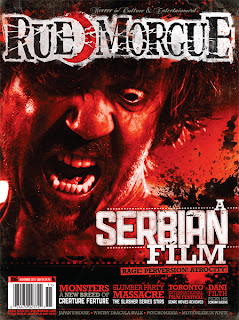 Confrontational, shocking, uncompromising, with hints of dark humour and absolutely unforgettable, A Serbian Film is “a well crafted, immensely indecent smut-slasher” (Variety) featuring a “remarkable performance by [Srdjan] Todorovic” (Fangoria) and is an affecting and thought provoking work of cinema that ranks alongside the likes of Requiem For A Dream, Videodrome, Irreversible and Antichrist as one of the most provocative films of its time.

Pick up the latest issue of Rue Morgue for an in-depth look at not only A Serbian Film, but also a guide to the history of Serbian horror movies. I kid thee not! Great read.
A Serbian Film Audience Reaction Controversy Cult Labs European Film Exploitation Socio-Political Commentary

Anonymous said…
You lucky UK kids, getting it before us Yanks.

Aaron said…
Too bad its not coming out a couple of weeks sooner. A SERBIAN FILM on Blu Ray = great stocking stuffer!
19 November 2010 at 08:06

James Gracey said…
@Cortez - Yeah, its a really interesting read. Check it out if you can. Unfortunately a lot of the titles are not available as the original prints remain locked up in Croatian film labs and many others were lost over the years as a result of shifting governments and civil unrest. Fascinating stuff!