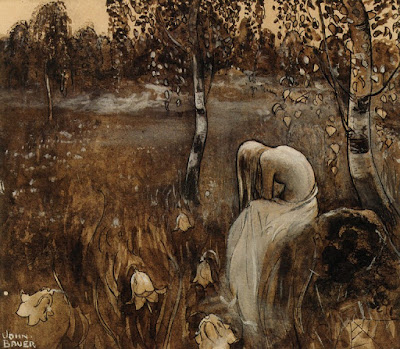 So I went on and on till I came to the secret wood which must not be described, and I crept into it by the way I had found. And when I had gone about halfway I stopped... I bound the handkerchief tightly round my eyes, and made quite sure that I could not see at all, not a twig, nor the end of a leaf, nor the light of the sky... Then I began to go on, step by step, very slowly. My heart beat faster and faster, and something rose in my throat that choked me and made me want to cry out, but I shut my lips, and went on. Boughs caught in my hair as I went, and great thorns tore me; but I went on to the end of the path. Then I stopped, and held out my arms and bowed, and I went round the first time, feeling with my hands, and there was nothing. I went round the second time, feeling with my hands, and there was nothing. Then I went round the third time, feeling with my hands, and the story was all true, and I wished that the years were gone by, and that I had not so long a time to wait before I was happy for ever and ever.

The White People by Arthur Machen