Random Creepy Scene # 338: The After Hours 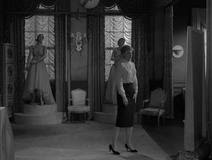 Mannequins have been used to supremely creepy effect many times before in horror cinema. From Mario Bava’s early giallo Blood & Black Lace, with its lavish fashion house peppered with dress makers dummies, to 1979’s eerie Tourist Trap with its bizarre roadside museum chock-full of the uncanny dummies, it is fair to say that mannequins are officially creepy.

An early episode of the Twilight Zone called The After Hours, also utilises the spooky plastic people to shuddering effect, and then it manages to do something genuinely original with them too…

Anne Francis stars as Marsha White, a perky gal about town who enjoys nothing more than shopping and browsing in expensive boutiques. Mooching around a colossal department store looking for a gold thimble for her mother, Marsha is taken to the 9th floor by the elevator operator: a floor that does not appear on the elevator gauge. When she reaches the 9th floor Marsha is greeted by a socially inept saleswomen, who shows her the only item on the floor: a gold thimble! Thinking about how strange all this is, Marsha purchases the thimble and decides to get the flock out of there. Noticing the thimble is damaged, Marsha tries to return to the 9th floor to exchange it but is told by all she encounters, including the manager, that the store does not have a 9th floor. Thinking she sees the saleswoman, Marsha marches up to her to demand an explanation only to realise that the saleswoman is in fact a mannequin. Marsha believes she is going insane, and while waiting in the manager’s office and attempting to calm herself, she becomes locked in the now deserted store. Panicking, she flees from floor to floor as bodiless voices call out to her as she catches fleeting movements amongst the stores many mannequins. Unnerving stuff, to be sure.

Ending up back on the 9th floor, Marsha is gradually surrounded by mannequins who come slowly to life and greet her, reminding her that she is also a mannequin and that she has just returned from her annual 30 day vacation to the world of the living…

I came across this effective and highly creepy little story, with a bittersweet sting in its tail, when I purchased Volume 2 of The Twilight Zone on VHS in a charity shop.
Of the other episodes (including Time Enough at Last, The Changing of the Guards and The Monsters Are Due on Maple Street), this was by far the most atmospheric and unsettling. The scenes featuring Marsha cautiously wandering around the deserted store are incredibly eerie. The host of initially menacing mannequins and whispering voices are chilling in their simplicity and Marsha’s transition from simply concerned to absolutely petrified, is a convincing one. 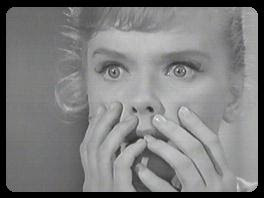 ‘Miss Marsha White on the ninth floor, specialties department, looking for a gold thimble. The odds are she'll find it, but there are even better odds that she'll find something else, because this isn't just a department store. This happens to be… the Twilight Zone.’

Here's a link to some thoughts on other sinister moments in cinema involving mannequins...
Anne Francis Creepy Scenes Made For TV Mannequins The After Hours Twilight Zone Twist Ending