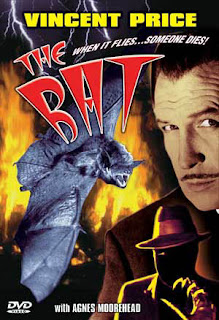 Murder-mystery author Cornelia van Gorder rents a country mansion for the summer while its owner, bank manager Mr Fleming, is on an extended hunting trip. Unbeknownst to Cornelia and her faithful PA Lizzie, Fleming has been embezzling bank bonds worth one million dollars, and hidden them in the manor. The women and their guests are menaced by a notorious killer dubbed 'The Bat' - who uses steel-clawed gloves to tear out the throats of his victims and will stop at nothing to get his hands on the loot!

The Bat is based on the 1920 Broadway play of the same name by Avery Hopwood and Mary Roberts Rinehart. It was previously filmed by Roland West in 1926 as The Bat and as The Bat Whispers in 1930. Its stage origins are evident in the sets and locations, mainly limited to a couple of rooms in the seemingly sprawling mansion.
The premise of a mystery writer renting a big house in the country while the surrounding area is gripped in queasy panic by a crazed maniac, is an irresistible one. Add to this a sense of humour drier than a mummy’s tomb, hidden bank bonds, secret passageways, an old dark house, feisty spinsters, some rabid bats and Vincent Price, and hey presto, you have The Bat. 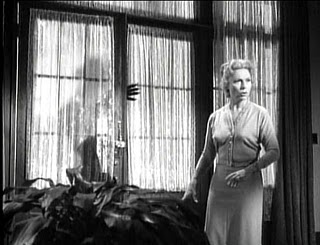 That most of the characters in The Bat are actually fans of murder mystery books and movies speaks volumes about the playful, knowing tone of the film. The protagonist herself is a mystery writer whose own titles include the likes of ‘The Private Morgue of Dr X’; surely a most fitting title for any Vincent Price or Bela Lugosi flick! The Bat displays a wonderfully wry sense of humour, even poking fun the very genre it nestles within. Much humour is derived from the situation Cornelia (Agnes Moorehead) finds herself in and she utilises her extensive knowledge of the thriller genre to outwit the coldblooded killer and eventually solve the mystery. At times it seems her overactive imagination will get the better of her, for as sturdy and resourceful as she is, she still gets spooked in the big old dark house. A gently humorous moment occurs when the she and Lizzie (Lenita Lane) are settling down for the night and begin to hear strange noises in the house. Lizzie quickly dispels any ambiguity or mystery almost immediately by listlessly rhyming off what the weird noises are as they occur. 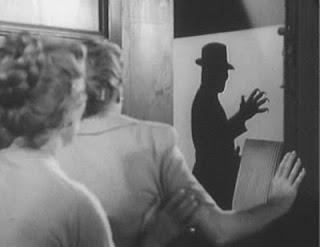 Of course it’s all hokey fun but that’s not to say The Bat is without its more eerie, atmospheric moments. The big house is the kind of house designed for people to go snooping around in, and director Wilbur lights it moodily; the scenes set at night boasting lightning storms that momentarily light up darkened rooms to reveal figures hiding in corners and behind doors are a particular delight. The Bat features typical old dark house imagery; billowing curtains, secret doors and rooms, flickering lights, thunder storms, hands reaching from around corners to strangle and throttle, and nightdress clad ladies wandering through shadowy hallways wide-eyed with fear. The fun really begins as soon as the staff of the house get spooked by weird noises in the night and abandon the house, leaving Cornelia, with her overactive writer’s imagination, and the slightly more cynical though no-less easily spooked Lizzie, all on their lonesome.

Before long the quiet house is host to all sorts of red herrings, suspects and victims, oh my! Scheming, double crossing, murder and greed are the order of the day, and The Bat delivers them in spades. One of the suspects trying to scare the women away in order to get into the house long enough to search for the loot, is the suave and charming Dr Malcolm Wells, played by none other than Vincent Price. We’ve seen what this cad is capable of earlier in the film when he shoots and kills the bank manager upon realising he is in the perfect situation to get rich quick. Price delivers a slightly more subdued performance here, and while his comic timing and wry wit are of course on full display, he really downplays any theatrics. His performance effortlessly matches the tone of the film; gently playful and quietly menacing.

Unexpectedly, The Bat presents us with strong, independent female characters. Cornelia and Lizzie are hardy, practical career women. The chemistry between Agnes Moorehead and Lenita Lane is lively and the pair sparks off each other in every scene. There is also quite a surprising amount of character development too, with stone-cold Lizzie displaying a maternal nature after the death of Judy (Darla Hood) – a young woman staying at the house preparing to give evidence in court after witnessing a crime. Dale (Elaine Edwards) is initially presented as the token wife of the young up and coming banker we assume will be the hero of the film; as soon as he is imprisoned, accused of embezzling the bonds his boss stole, Dale takes it upon herself to prove his innocence, putting her life at risk in the process. Sure, the characters are still stock types, but in comparison to many ‘old dark house’ murder mystery thrillers from the Fifties, this bunch of resourceful, non-hysterical ladies are more rounded than usual. 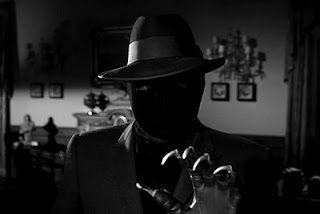 Most of the male characters come under suspicion throughout proceedings; all harbour dark secrets and shady pasts. Suspicion is effortlessly cast on each of them through the script's plethora of barbed quips and insinuations, which come thicker and faster than the punctures in the necks of The Bat’s victims. The Bat himself is a sight to behold. Sporting a pair of impractical but sinister looking gloves with steel claws embedded in them, he may not exude much menace for today’s viewers, but there are still one or two effectively creepy moments in which he is glimpsed lurking outside windows or behind doors. Indeed, the method by which he dispatches his victims is pretty gruesome and while we don’t actually see anything, the descriptions of the aftermath leave nothing to the imagination. For all its humour, The Bat still manages to surprise with the odd nasty moment; such as the death of Judy on the stairs, which comes after a carefully constructed suspense sequence featuring Dale in the attic... Shuddersome.

The Bat is delightfully old fashioned (in a ‘fake plastic bat’ kinda way) and perfect viewing for a lazy Sunday afternoon, or indeed, a dark and stormy night. When one character quips “A charming little caper”, they could have been referring to the very film they were starring in.

James Gracey said…
It is indeed a lot of fun, Andrew!
There were other, cooler covers I came across, but I went with that one because it was one of the few that featured Price so prominently. And this month IS his centenary! ;)
20 May 2011 at 10:30

Aaron said…
It's been a while since I've seen it, but I remember liking THE BAT quite a bit. You'd think it would be uneven with some of the more lighthearted, comedic moments amidst a story that revolves around a character as dark as the titular "Bat", but it ultimately works. Plus, I love the Bat's unique weapon of choice. Overall a neat little proto-slasher, if you want to call it that.
20 May 2011 at 13:26

James Gracey said…
Absolutely, Aaron! The comedy works really well with the overall tone of the film.
20 May 2011 at 17:40

Mykal said…
How did I miss this? Sounds like just what the doctor ordered. I've always had a crush on Agnes Moorehead into the bargain. Luckily, Netlix has it on instant streaming. I'm in.
22 May 2011 at 02:33