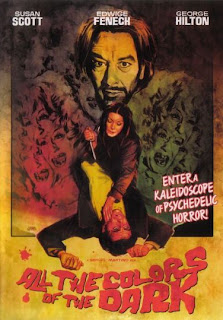 When she loses her unborn baby in a car accident, a troubled young woman becomes the target of a Satanic cult who may have been responsible for the death of her mother many years ago…

Sergio Martino’s All the Colours of the Dark is a psychedelic trip of a giallo filtered through the gothic aesthetics of Hammer Horror and the Satanic Panic-induced paranoia of Rosemary’s Baby. Reconceptualising the usual conventions of the giallo into a plot about a Satanic cult’s advances on a traumatised young woman, it falls into a miniscule group of films critic Kim Newman dubs ‘giallo-fantastico’; gialli which boast overtly supernatural aspects as well as typical troupes such as sexual perversion, blackmail and murder. Adding to the delirious nature of the plot are abstract dream sequences and myriad moments which cunningly blur the line between reality and deranged fantasy. Jane (Edwige Fenech) has increasing panic attacks, hallucinations and nightmares which are woven into the narrative with twisted aplomb. In place of the whodunit murder mystery plot typical of the giallo, everything hangs on the notion that she may or may not be losing her grip on reality.

While Martino has a penchant for exploitative fare loaded with sex and violence, his stylistic approach to Colours is undeniable; it is one of the most striking and unusual giallo titles ever to be produced. The way in which it toys with conventional plot structure is also rather radical for a film of its time. The audience is frequently jolted as the lines between reality and delusion are consistently rippled. The incorporation of the Satanic cult echoes the likes of Aldo Lado's Short Night of Glass Dolls and Riccardo Freda’s The Wailing, while imagery more akin to gothic horrors of bygone years - animal sacrifice, blood offerings, orgies and Satanic rituals - really enhances the nightmarish atmosphere. Something of an ‘unreliable narrator’ due to her prior trauma and nervous disposition, Jane’s perception of reality is further warped as the blue-eyed killer from her dreams begins to invade her waking world too. Its these very elements that imbue All the Colours of the Dark with an atmosphere and tone quite distinct from its peers. 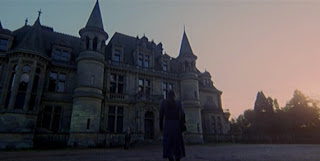 While it does contain a few plot holes – no giallo is seemingly complete without ‘em! – a number of arguably clichéd moments are given an alarming hot-wire courtesy of some frenzied editing, drawing us deeper into Jane’s panic. All the red herrings typical of the giallo abound, including Jane’s therapist, sister, boyfriend and her weird neighbour Mary (the ever-watchable Marina Malfatti) who invites her to join the cult. Throughout it all, the lovely Edwige Fenech exudes a sensual vulnerability and ensures we entrust our sympathy to her. She’s joined by Ivan Rassimov and George Hilton - about as synonymous with the giallo as she is - and all three are on fine form; even if the devilishly charming Rassimov is typically underused. Behind the camera is peopled by just as many stalwarts of the genre; including writer Ernesto Gastaldi and composer Bruno Nicolai, whose evocative score utilises sitar to disorientating effect, enhancing the atmosphere of exotic mysticism. Martino’s camera is rarely still and it lends even the most dialogue heavy scenes a real fluidity, while enhancing the clipped pace. He utilises widescreen to full effect, as his camera stalks and swirls around the London setting, exploiting the chilly autumnal environs, while filming the trendy apartments and vast mansions the story unfolds within, from all manner of skewed angles. 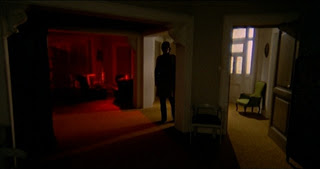 Perhaps because of his willingness to experiment and work in different genres, never allowing himself to be associated with any one kind of film, Martino doesn’t really receive the recognition that he should for his contributions to Italian genre cinema. His gialli straddle the line between epitomising the cycle/filone, and slyly subverting it. The Strange Vice of Mrs Wardh and The Case of the Scorpion’s Tail are shiningly typical examples of the giallo (in a good way!), while Your Vice is a Locked Room and Only I have the Key and Torso push the envelope; the former exuding a decadent gothic foreboding, while the latter - arguably a proto-slasher - strips plot to bare bones and edge-of-seat tension. Anyway. I digress. All the Colours of the Dark is a highly unconventional, heady giallo, and one which gradually emerges as a twisted remix of Rosemary’s Baby with copious Satanic Panic, sex, violence and a ground-breaking narrative structure.
All the Colours of the Dark Edwige Fenech Gialli Giallo Italian Horror Satanic Cult Sergio Martino Seventies Horror

Mykal said…
James: This one sounds particularly interesting. What a fascinating sup-genre Giallo-Fantastico sounds like! As I was reading this, I kept thinking this film sounds like Rosemary's Baby mixed with . . . and then I couldn't think what. " twisted remix of Rosemary’s Baby with copious Satanic Panic, sex, violence . . ." said it perfect. As usual, well done.
19 December 2012 at 15:49

James Gracey said…
Thanks Mykal. If you ever get a chance to check this out, I really recommend it. In his book, La Dolce Morte, Mikel Koven cites a few other examples of giallo-fantastico; amongst them Dario Argento's Phenomena and Lucio Fulci's The Black Cat. Fascinating stuff!

Terence said…
This is a gorgeous film. The casting is excellent and Marina Malfatti is just otherworldly! My only gripe about this film is the exposition in the final third because the attempts at explaining the cult neutralises most of the magic of the first two-thirds.

The giallo-fantastico genre is very underused. "Phenomena" is a great example of the highs (beautiful cinematography & fantasy) and lows (overabundance of ideas &/or uneven writing) of this genre (but it's still my first & favourite Italian horror film). I'm not familiar with other similar films but I think "Tragic Ceremony" could sort of qualify.

And yes, Martino's films are very enjoyable and the man himself doesn't come across as pretentious.
I quite his quote:
"My movies are like a soft drink -- sparkling, unaffected products for mass consumption. A soft drink doesn't have the prestige of champagne, of course, but I'd rather have a good soda pop than watered down wine anytime."
26 December 2012 at 04:34

James Gracey said…
I love that quote, Terence. Perfectly encapsulates Martino's work. Thanks so much for sharing it! I haven't seen Tragic Ceremony. YET. Must seek it out. :)
2 January 2013 at 22:21