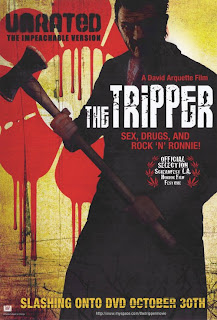 A group of free-loving, pot-smoking, acid-dropping hippies attend a music and camping festival only to find themselves stalked and brutally butchered by an axe-wielding psychotic killer wearing a Ronald Reagan mask. Aided by his faithful killer dog, Nancy. Naturally.

David Arquette’s directorial feature debut is a loving throwback to gritty backwoods slashers from the Eighties. Arquette actually sticks fairly rigidly to the preconceived slasher coda. A pre-credits-like ‘flashback’ to the 80's depicts a young boy who, after seeing his father and lumberjack foreman being attacked by a deforesting protestor and subsequently arrested by the police, goes on a killing spree with a chainsaw.
Cut to present day and the introduction of 'Final Girl' Samantha (Jaime King) who, still reeling from her breakup with an abusive boyfriend, joins her eclectic bunch of kerr-azy pot-smoking friends (who resemble a really fucked up version of the Scooby gang) and heads to the American Free Love Festival in woody Northern California. To his credit, Arquette has gathered together a pretty cool bunch of alt/indie actors including Jason Mewes, Lukas Haas, Balthazar Getty and Marsha Thomason who delve into their mainly unsavoury archetypes characters with dark relish.

The Tripper is a mixed bag really, for whilst Arquette displays an undeniable talent for creating and sustaining a creepy atmosphere with bizarre and off kilter humour thrown in for good measure, he isn’t able to muster any real sense of tension or suspense. The story is at times a jumbled mess, but it still exudes a cheeky wit and shameless trashiness that is still perfectly entertaining and manages to exhibit more than a hint of old school slasher movie ethos. However, what began as mildly ridiculous schlock-homage, soon degenerates and plummets face first into pure, outright ludicrousness with the discovery of a backwoods shack decked out in candles and Ronald Reagan memorabilia. The film also has a weird political slant – though this is played for laughs and highlights criticism flung at previous slasher movies for being morally conservative in their outlook. Arquette takes the subtext of slasher movies and makes it ‘over-text’. Picking up right where John Carpenter’s Halloween left off and exaggerating it to warped proportions. Carpenter’s seminal slasher is often regarded as the film that marked the beginning of the end of the Love Generation – with its depictions of anyone caught dabbling in activities associated with the free-loving ‘hippy’ and liberal Sixties, including drinking, doing drugs or engaging in premarital bedroom activities, falling victim to a seemingly highly conservative maniac - an action Carpenter has since apologised for! 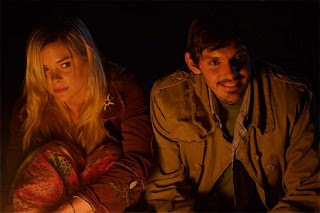 Arquette obviously has a keen eye for striking visuals – the scenes in the forest at night are particularly effective: all fog-shrouded with moonlight streaming through trees to silhouette the figures moving within them. At times though the visuals, while imaginative, are a tad distracting and really lift the viewer out of the film and break what little tension Arquette was able to muster. This is especially the case during the film’s climactic chase scene as Samantha is pursued through the forest after she’s been spiked with drugs and is hallucinating wildly. Psychedelic colours and shapes swirl around onscreen and characters are framed through a kaleidoscopic lens. Woah man, trippy. Gnarly. Etc etc. Having said that, the onslaught of wild visuals never bores and easily conveys the drug addled, warped perspective of the characters. The editing is also designed to purposely disorientate, particularly in conjunction with the psychedelic visuals that convey character’s tripping perspectives.

The Woodstock-type festival populated with randomly naked, free-loving pot-heads is also effectively realised, highlighting another troupe of Arquette’s in his canny knack for recreating the look and tone of a bygone era and creating recognisable characters to inhabit it. His love for old slasher films is also evident in the score, courtesy of Jimmy Haun and David Wittman, boasting wizened synth drones. The music also features militant, distorted patriotic drums and a warped rendition of the Star Spangled Banner. Odd. 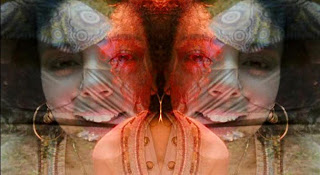 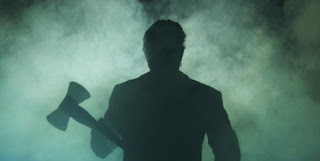 Thomas Jane is particularly good as the town sheriff and Courtney Cox-Arquette also makes a small, though admittedly humorous cameo as an animal rights extremist who is torn to shreds by the killer’s rabid dog, Nancy. The rest of the cast do fine jobs with the often deliberately trashy material - David Arquette even cameos as lovable redneck Muff. Aww. Paul Reubens however, picks up the award for most thankless role ever. His devastatingly unfunny and woefully unnecessary appearances really break up the flow of an otherwise rather entertaining movie. His comeuppance comes far too late – but is kind of appropriate for his dreadful character. Poor Paul Reubens. I’m sure he was just glad to be working again.

While silly and overly jokey, the film is also immensely violent – hell, ridiculously violent. The story unravels in the most chaotic and frenzied way possible, and the bursts of brutal violence and gory effects are often ill at ease with the fart gags and tit jokes. A particularly memorable and very violent scene that is essentially played for laughs involves the killer bursting into a rave party and hacking up the revellers. This is a frenzy of a scene with psychotic editing and calamitous music.

A bewildering blend of inappropriate humour, brutal violence and loving homage to old slasher movies, The Tripper is a mess of movie that still somehow manages to work. Just. Perhaps for hardcore slasher fans only. Or hardcore David Arquette fans only. Or your Mom!
Backwoods Slasher Body Count Movie Horror Film Review Slasher

Unknown said…
Hi James - is there an email address I can catch you on? Have something horror film related!
13 January 2010 at 20:20

Tower Farm said…
I remember when this came out initially. David Arquette was promoting it at a horror convention. Billy and I skipped watching it though. "silly and overly jokey" is exactly what I would have guessed.

Thanks for the review! Always enjoyable.

Unknown said…
Ha ha...My mom WOULD love it! I remember this one and I did want to actually see it, though I heard kind of bad things. I am a pretty hardcore Slasher fan, so based off your review,I will certainly give it a chance. Great review as always and thanks for bringing this one back to my radar.
13 January 2010 at 21:51

Aaron said…
I've heard bad things about this ever since it came out, so I haven't even bothered to watch it yet. And "hardcore David Arquette fans"... isn't that an oxymoron or some shit?
14 January 2010 at 02:30

James Gracey said…
Hey guys - yes, while this is certainly a fine LOOKING film - parts of it look like they've been cut straight out of the Eighties - it is just too goofy. It is supposed to be funny - but the 'humour' ruins any chances of tension.
I just happened to catch it on TV the other night - and being the lover of slasher flicks that I am - felt curious to see it.

Aaron i don't know what you mean!!? David Arquette is the MAN! I love ALL of his films. Except the one with the dogs. And the one where he's a wrestler. And... Ok. Maybe you're right... He was funny in Eight Legged Freaks... *backs sheepishly away from conversation*
14 January 2010 at 09:58

James Gracey said…
Hey Lauren. Intriguing! Yup, you can email me at the_outsider@live.co.uk

Mykal said…
James: Sorry to hear this one didn't measure up. I have always considered David Arquette a bag of strange-eyed, leering, untapped potential. Maybe next time. great review as per usual.

Unknown said…
Excellent timing, I just hit this one as well, like you mentioned Arquette does a surprising decent job, much better than I ever would have given him credit for. I met him on that tour too and he was high as shit. Maybe higher than shit.
17 January 2010 at 07:15