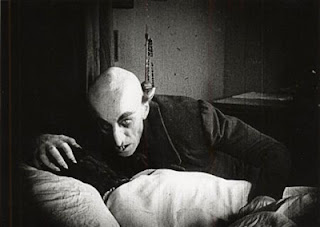 Last night saw the Ulster Hall in Belfast play host to a very special screening of FW Murnau’s undisputed classic of German Expressionist cinema, Nosferatu.
The film was accompanied by an improvised score courtesy of renowned organist, Martin Baker, who has since 2000 been the Master of Music at Westminster Cathedral. Baker was granted the rare honour of being allowed to play the world famous Mulholland Grand Organ, one of the oldest examples of a functioning classic English pipe organ. The Organ is named after former Lord Mayor of Belfast, Andrew Mulholland, who donated it to the hall in the 1860s.

Patrons of the sold-out event were encouraged to dress in typical 1920s garb and though many didn’t, this writer was impressed by those who did; particularly an enthusiastic couple dressed as the undead. Before the screening, there was an insightful introduction by local film historian, opera fanatic and all round film buff, George Fleeton, who lovingly dissected the historical significance of Murnau’s chilling classic and pointed out how radical a film it was for its time. Fleeton also pointed out that with its embracement of concepts and ideas by the likes of Freud and Jung, Nosferatu unfolds as “a heady mix of Victorian sexual repression, virgin sacrifice, the world of our unconscious and imagination, dreams and nightmares, the undead, plague and contagion and blood as the elusive elixir of youth."

Fleeton also considered the significance of the time in which the film was made, the early 1920s, between Germany's defeat in the First World War and Hitler's rise to power. As such, Nosferatu bears the marks of cinema at the time; bound up in experimental Expressionism, which externalised internal conflict and anxiety. Its obsessions with death and the spread of plague now stand as a chilling harbinger of what was happening in Germany after the publication of ‘Mein Kampf.’ 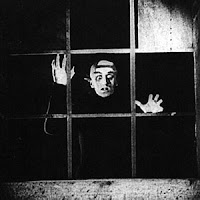 Baker’s improvisational score packed a powerful punch, moving from tender love themes to high gothic atmosphere and otherworldly menace with deceptive ease. He even included a number of motifs and recurring themes and didn’t hold back from whipping himself into a suitably deranged frenzy as the film came to its shattering conclusion; all the while the music from the organ vibrating, rippling, crashing through the floor of the building and up into the spines of the audience.

Nosferatu holds the honour of being the first ever cinematic adaptation of Irish writer Bram Stoker’s bestselling chiller, 'Dracula' – the ultimate and most renowned of vampire novels. However, we should count ourselves lucky that this adaptation is actually available for us to watch at all today. Stoker’s widow, Northern Irish born Florence, found out about Murnau’s ‘plagiarised’ adaptation and successfully sued his production company for copyright infringement. Without having seen the film for herself, and well after its sparkling German premiere – at which it was accompanied by a full orchestra to provide a score – she demanded the negative and original prints be destroyed. Luckily they weren’t – someone who saw the groundbreaking film for what it was – a future classic – hid them away for safe keeping. 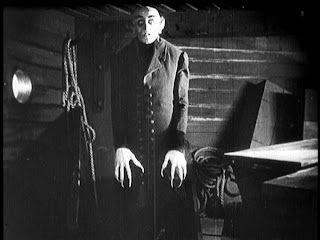 Nosferatu retains so much of its power today, and can easily hold its own against other adaptations such as Tod Browning’s Bela Lugosi staring 1931 version, Terence Fisher’s sumptuously gothic take in 1958 and Francis Ford Coppola’s over blown and fever-hewn 1992 version. These are but three of countless adaptations. Despite the increasing, or perhaps because of it, romanticisation of the figure of Dracula, and vampires in general – they’re now portrayed as misunderstood, tragic (sometimes sparkling) and deeply lovelorn individuals - Max Schreck’s undeniably sinister performance and appearance as the Count still resonates with unsettling power. With his bat-like face and ears, and protruding fangs, he meshes together feral ferocity with a gaunt phantom-like frame. His introduction in the film is amongst the most effective in horror cinema, and Murnau litters the film with memorable, strikingly ominous and downright iconic shots of the Count…

The screening of Nosferatu and its accompanying live score by the inspired Barker, unfolded as a magnificent evening; the success of which will hopefully ensure it was the first of many more to come. I will certainly treasure the experience. 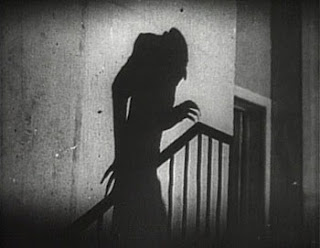 Mykal said…
James: What a magnificent evening that must have been. One truly worthy of all my powerful jealousy. Great post. It made me wish that I was a an Irishman - and not for the first time.
10 February 2011 at 01:24

Unknown said…
Wow, James, that is simply incredible in a way that I only wish I could comprehend. I would kill people, and a lot of them, to be able to go to a place as amazing as that and see a film such as this presented in such a way! I am so very jealous, but your shared experience here is enough to make me feel as if I too, were there.
10 February 2011 at 02:35

James Gracey said…
It really was a great evening, I'm still buzzing from it. I hadn't seen Nosferatu in a long time, and got so many chills re-watching it - thanks mainly to Martin Baker's incredible score; it worked so well and really complimented the abundance of creepy images flickering across the screen. Guys, you wouldn't believe how utterly amazing that organ sounds! Still can't believe he improvised the whole thing. Mad bastard. :oD
10 February 2011 at 11:49