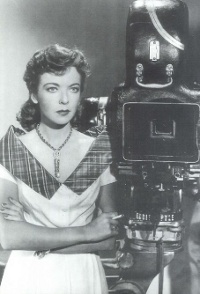 Trailblazer Ida Lupino was to moody, suspenseful film noirs and taut thrillers in the 40’s and 50’s, as Jamie Lee Curtis was to low budget slashers throughout the 80s. Born in 1918 and beginning her acting career in the 30s, Lupino starred in many noirs and thrillers such as They Drive By Night, The Hard Way and On Dangerous Ground. She eventually went on to become a pioneering figure amongst women behind the camera in cinema. She was the first American woman to ever direct a film noir (The Hitch-Hiker) and her other feature directorial offerings, such as Outrage and The Bigamist, were concerned with such shocking social issues as rape and bigamy. No mean feat considering she was making films in a post Hayes Code Hollywood. And was a woman, to boot.

While her directorial offerings can’t really be described as straight ‘horror’, they still contain moments fraught with suspense, violence and unsettling moodiness and she dabbled in the sorts of genres usually associated with men; that is, hard boiled noirs and gritty B-movies. The Hitch-Hiker, one of Lupino’s most significant films, is about a couple of pals heading off to Mexico on a fishing trip who pick up a sinister hitchhiker along the way. Turns out, the mysterious stranger is a psychotic serial killer who casually reveals to the men in the car that he’s going to kill them when they reach their destination. In his book ‘Hollywood Directors’, writer Richard Koszarski praised Lupino’s film work, claiming “Her films display the obsessions and consistencies of a true auteur... Lupino was able to reduce the male to the same sort of dangerous, irrational force that women represented in most male-directed examples of Hollywood film noir.” 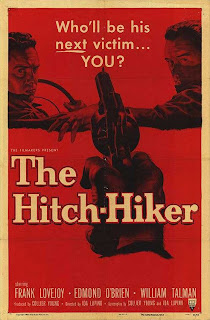 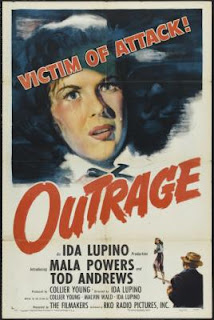 Her later directing career mainly consisted of TV work, but much of this was also genre based. She directed episodes for series such as Alfred Hitchcock Presents, Thriller, The Fugitive, Colombo and she was the first woman to ever direct an episode of The Twilight Zone.

Lupino’s episode of The Twilight Zone, The Masks, was part of the fourth series of the show. It revolves around the tale of a selfish family gathering at the house of their ailing patriarch for a reading of his will. One of the stipulations of his will is that the family wear creepy masks that reflect their inner corruption. When it comes time to take the masks off, well, I’m sure you can guess that the story doesn’t end well… 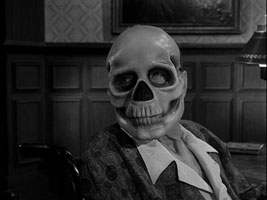 Carrie Rickey wrote an article for the Village Voice, ‘Reel Women’ and in it she praised Lupino as a 'model of feminist moviemaking', stating “Not only did Lupino take control of production, direction and screenplay, but each of her movies addresses the brutal repercussions of sexuality, independence, and dependence.”

Lupino passed away in 1995 but her legacy, and her contribution to genre cinema remains, marking her as one of its most daring, innovative and important directors; let alone female directors.
Feminist Horror Ida Lupino Noir The Twilight Zone TV Show Women In Horror