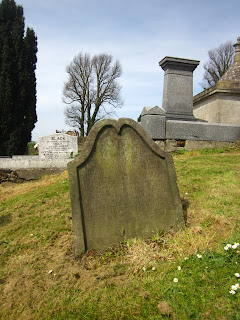 Located just outside the town centre, and surrounded by a residential area, the site upon which Shankill cemetery stands was a place of worship in earlier centuries. Shankill Parish church was originally situated here before it was eventually moved to the town centre. The outline of a double ring fort is still noticeable. Amongst those at rest in the cemetery are the Brownlow family, who established the town in 1610 when they were given land beside Lough Neagh by the British government during the Plantation. They eventually contributed to the development of the linen industry the town became famous for throughout the seventeenth century. Their family vault is situated in the centre of the cemetery where the old church once stood. Apparently well off English families such as the Brownlow’s, sought burial grounds on sites of old churches at this time. A large number of people who died during the famine and in the workhouses of the town are also buried here in unmarked mass graves.

As much as I love old cemeteries, Shankill holds a particularly special place in my heart. My grandfather was the caretaker here and my mother grew up in the graveyard house; one of her sisters was actually born in the house. As a rabid fan of all things horror, there is something else that contributes greatly to my fondness of the place aside from these personal connections. In the middle of the cemetery is the grave of a local woman named Margorie McCall; her epitaph is a simple but highly unusual one. It reads ‘Lived Once, Buried Twice.’ As a child I remember my mother telling me the story of Mrs McCall, indeed, her tale is well known throughout the town. It is one that still fascinates me… 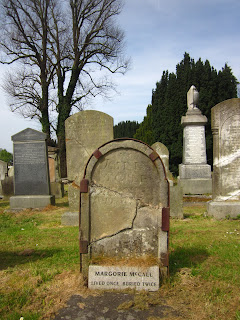 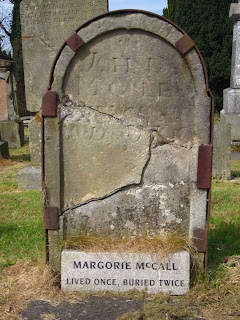 Margorie grew up in Lurgan in the early Eighteenth century. It is believed she was married to John McCall – who is thought to have been a surgeon – and she lived with her family in Church Place. It is said that after she became ill one day, she fell into a swoon from which she couldn’t be revived and, as her family thought, died soon after. At the wake there was quite a commotion concerning her wedding ring. Many of the mourners tried in vain to prise it from her fingers, as they perhaps anticipated the possibility that grave robbers would desecrate Margorie’s resting place in order to steal it. Remember, this was during a time when ‘resurrectionists’ forged careers out of digging up the recently interred and selling the bodies to surgeons and anatomy students for dissection and study. Grave robbing was practiced quite widely, especially here in Ireland and in Scotland (Burke and Hare, anyone?). 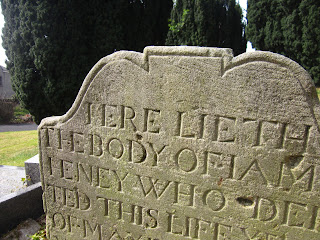 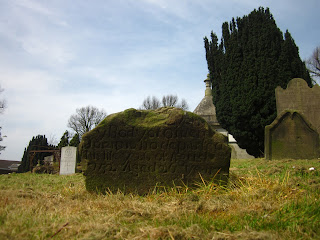 After the wake – which according to folklore is traditionally an attempt to avoid premature burial; the family of the deceased would sit and watch over the body to see if the person awoke - Margorie was laid to rest in Shankill Graveyard. That very same night her body was exhumed by grave robbers. The robbers also tried in vain to remove the ring from her finger, but could not. Eventually a blade was produced – perhaps with the intention of severing her finger to remove the ring. As soon as blood was drawn from Margorie she came to – revived from the coma-like swoon she had fallen into. Giving the robbers the fright of their lives, Margorie climbed out of the coffin and began to make her way home. When I picture this spectacle in my head - a lone woman wafting through an empty town in the middle of the night - I immediately think of the scenes from Val Lewton’s Isle of the Dead, when the cataleptic Mary St. Aubyn (Katherine Emery) has emerged from the tomb in which she was prematurely interred and wanders around the lonely isle, burial gown fluttering in the howling wind. 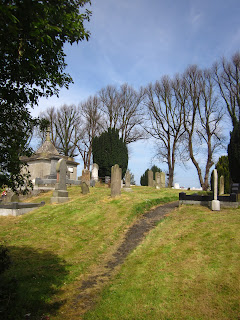 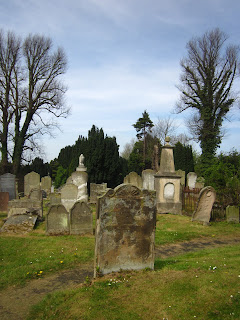 Meanwhile Margorie’s family were gathered around the fire at home when they heard a knock at the door. Margorie’s husband John – still grief-stricken – exclaimed – “if your mother were still alive, I’d swear that was her knock.” And sure enough, upon opening the door John was confronted by his “late” wife – dressed in her burial clothes, very much alive. Depending on who is telling the tale, several variations have come to my attention. Some say that when Magorie’s husband answered the door to her he dropped dead from the shock of seeing his ‘dead’ wife. Others say they had several more children together before she died. What seems to be the general consensus is that Margorie did indeed live for some years after this macabre event and when she did finally die she was returned to Shankill Graveyard where she continues to rest to this day. Throughout the years she has become something of a local ‘bogey-woman’, tales of whom are told to scare naughty children. 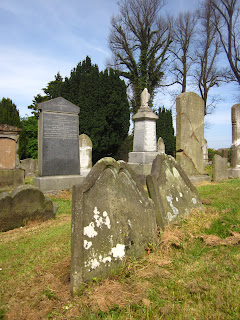 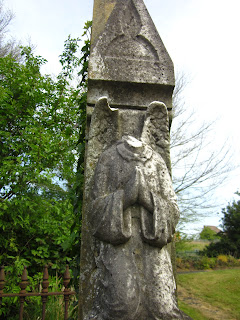 The following is believed to have been penned by a local scribe under the name of Cortze, at the graveside of Magorie McCall some time in the late 19th century.

There lowly beneath lonely sod,
A lady twice entombed,
Tradition has it noised abroad,
She was exhumed alive.

Her precious ring her finger bore,
From her bright wedding day;
And in death likewise wore
When buried in the clay.

But a foul thief to steal the ring,
Did cast the clay aside
And he to life did quickly bring
She who lately died.

For he should cut the finger round,
To gain the golden prize,
But when the blood flowed from the wound
She spoke and did arise.

And straight away to her home did go
In her dead robes so white;
Like a wandering spirit free from woe,
But doomed to roam at night.

And when she reached her husbands door,
She gave her well known knock
An he fell senseless to the floor,
Un-nerved by the strange shock.

Her children knew here gentle voice
And flew to her embrace;
And all the neighbours did rejoice,
But marvelled at the case.

But death at last took here away,
As he will sure take all
And not again to Judgement Day
Shall Rise Margery McCaull. 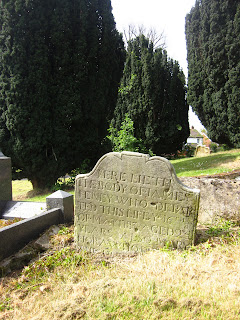 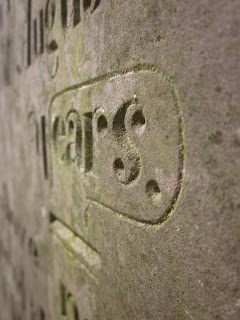 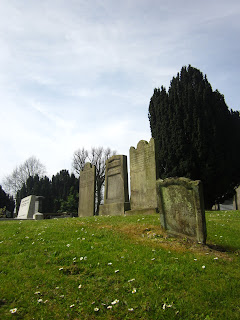 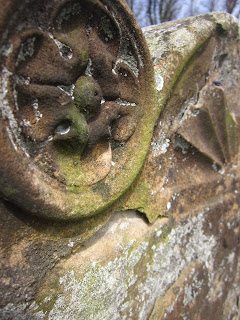 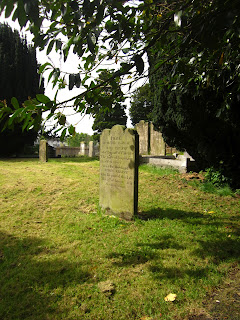 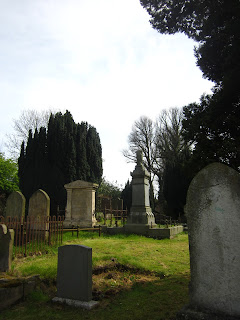 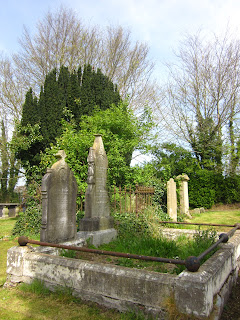 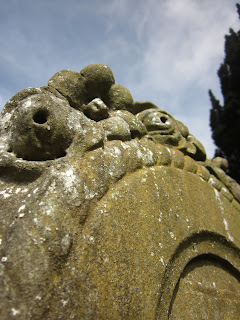 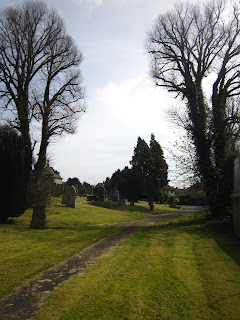 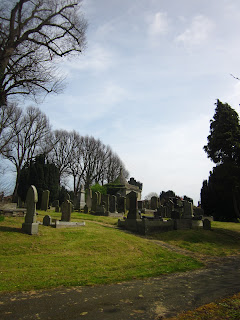 A few years back I contributed an article about Margorie McCall to BBC NI. You can read the responses to it here. Sleep tight!
Graveyard History Lived Once Buried Twice Lurgan Margorie McCall Photographs Pictorial Premature Burial Resurrectionists Shankill Graveyard Wanderings Amongst the Dead

Marie Robinson said…
What a wonderful story!! I thank you for sharing it! And also, I am immensely jealous of your family; I have always wanted to live in or near a graveyard.
26 August 2012 at 05:20

James Gracey said…
Glad you enjoyed reading it, Marie. As a lover of the macabre, I wish I'd lived in that house too! Needless to say I really dig the fact that my family did. Perhaps this has fed into my love of horror over the years. #horrorgeek ;)
26 August 2012 at 09:17

James Gracey said…
Thanks Dr Theda; I really enjoy researching them. Must read your review of The Reptile - one of my favourite Hammer films. :)
2 September 2012 at 11:21

psynno said…
Fascinating story, James,it really chilled me. I can see the effect it would've had on you growing up. Glad the grave robber's got a bit of a shock... Hope all is well.
7 September 2012 at 21:32

Lucy Wood said…
I loved this, the story about Mrs McCall was brilliant. It's inspired me to go have a nose round my local graveyards now! Hope you're doing great :)
28 October 2012 at 00:09

James Gracey said…
Thanks Lucy! Hope you're doing great, too. Have fun exploring your local graveyards. X
29 October 2012 at 17:00

Richard Stones said…
Hello James. I am looking up info on this subject as many years ago my partners Mum took part in an independant movie retelling the story of Margorie McCall. I cannot find it or any reference to it. Do you have any knowledge of such film? Cheers Richard.
9 September 2019 at 23:41

James Gracey said…
Sorry for the late reply Richard, and sorry I can't be any help. I have no knowledge of that film, but would love to see it if you manage to track it down. A band called Documenta recorded a concept album inspired by the story. Worth a listen... https://touchsensitiverecords.bandcamp.com/album/lady-with-the-ring
1 November 2019 at 23:25