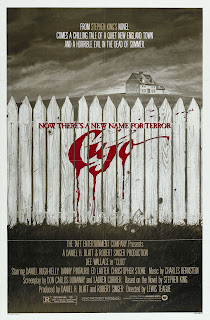 Stephen King’s tenth novel, Cujo (1981), tells of a young woman and her infant son who are trapped in their car at an isolated farmhouse when confronted by a rabid dog. It was adapted for film by Lewis Teague in 1983 and the adaptation features all the sweltering claustrophobia and intensity that made King's novel so gripping.

Teague’s adaptation - which, like King's novel, also explores themes such as addiction, free will, childhood fears, adultery and familial dysfunction - is the subject of a new book by Melbourne based author and film historian, Lee Gambin. Nope, Nothing Wrong Here: The Making of Cujo (BearManor Media) is a staggeringly detailed work featuring academic scene-by-scene analyses alongside in-depth interviews with key members of the cast and crew, including stars Dee Wallace, Daniel Hugh Kelly and Danny Pintauro, director Lewis Teague, and composer Charles Bernstein.

I recently had the pleasure of chatting to Gambin about his new book and the unyielding appeal of the work of Stephen King. Head over to Exquisite Terror to read it.