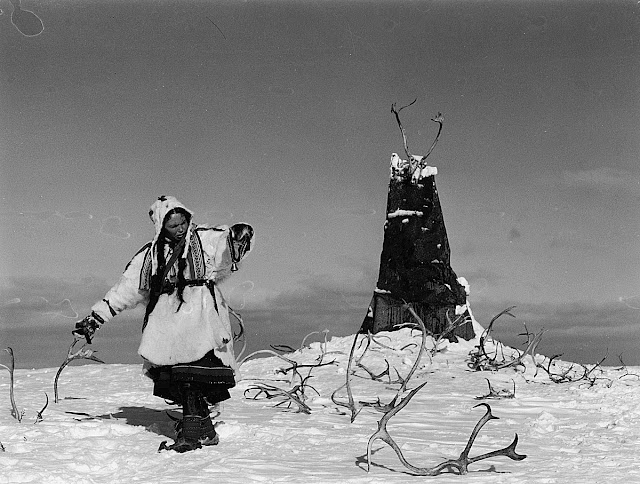 The debut feature film by Finnish documentary filmmaker Erik Blomberg, The White Reindeer is a heady amalgamation of Scandinavian folklore, Sámi shamanism, societal gender inequality and sexual anxiety. When newly married Pirita (the film’s co-writer, Mirjami Kuosmanen) begins to feel lonely and frustrated as her reindeer-herder husband must spend long periods of time away from home, she visits a shaman for a remedy. He concocts a potion to ensure Pirita is so alluring that her husband will be unable to leave her. However, the potion, combined with Pirita’s emerging latent powers (she was born a witch), transforms her into a bloodthirsty, vampiric shapeshifter who, in the form of a white reindeer, lures men out into the snowy wilderness where she consumes them.

With its story unfolding amidst vast snowy vistas and within cosy log cabins (the interiors of which are filled with long shadows cast by glowing hearths) Blomberg’s film is awash with striking imagery and enshrouded within a haunting, melancholic atmosphere. With its themes of sexual repression and anxiety represented through animal transformation – Pirita becomes a sort of were-reindeer – The White Reindeer stands alongside Cat People (1942) in its suggestive exploration of female sexuality – more specifically, the denial and policing of female sexuality by societal traditions, gender roles and stereotypes. The frustrating expectations placed upon women, which result in their own ambitions being set aside for the sake of familial/domestic responsibilities not generally expected of men, is highlighted through the depiction of Pirita before and after her marriage. Prior to entering matrimony, she hunts, herds and races reindeer. After marrying, she finds she is expected to stay at home while her husband is gone for weeks, sometimes months at a time, herding reindeer. Pirita is a complicated and wonderfully complex character, and Kuosmanen perfectly conveys her quiet frustration and repressed latent powers, ensuring we completely sympathise with her.

After she takes the potion and sacrifices ‘the first living thing’ she sees (the little reindeer her husband gave her as a wedding gift) to a pagan deity (in a scene crackling with weird and wonderful ‘folk horror’ imagery) as instructed by the shaman, events gradually descend into shadowy horror territory. Pirita notices the attention she receives from other men in the village. When she begins to transform into a vampiric shapeshifter and becomes the titular creature, luring men to their doom in the desolate snowscape outside of the village, the othering of her sexuality becomes apparent, and her desire for companionship and intimacy turns to bloodlust. 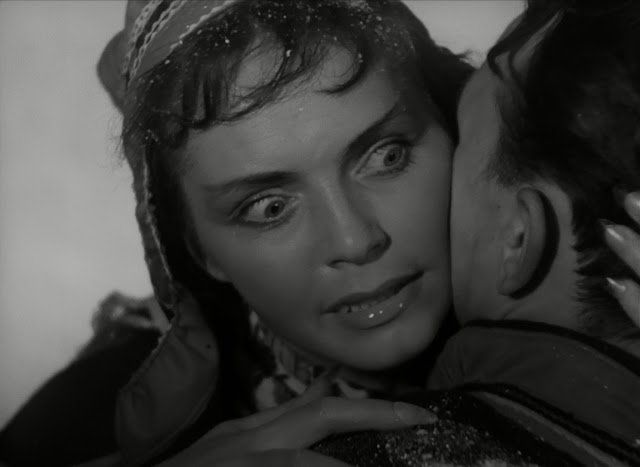 The White Reindeer delves into ancient Finnish folklore and Sámi shamanism, which venerates a deep spiritual kinship between man and animal, specifically the reindeer, imbuing the film with a wonderfully rich and fascinating core. The depictions of shamanistic ritualism feel very authentic, due to Blomberg’s roots in documentary filmmaking, which are also immensely evident throughout the many scenes depicting the daily life of the villagers and the reindeer herders. They feel very much as though they capture slices of life from a by-gone era.

Elements of folk horror flow throughout. The story is loosely based upon an old folk tale and features the image/motif of a white reindeer, a highly significant creature in Finnish lore and superstition. When Pirita visits the shaman, she also discovers she is a witch (as the opening folk song explains, this was something she was born into) and has latent powers. She initially feels empowered by this, but later, after she has succumbed to her newly-acquired bloodlust, several moments reveal her increasing horror and self-loathing. The scenes in which she gazes into a mirror and sees her reflection smiling back at her, subtly revealing fangs, appear to suggest she no longer recognises herself, or is being consumed by her bloody desires, and she recoils in horror. This moment is beautifully constructed and also perfectly conveys to us how much of a stranger her husband has become to her, as Pirita struggles internally with the knowledge she now holds regarding herself and her powers and his utter ignorance of this. The film presents us with a highly unusual take on the figure of the vampire and bears a slight kinship with Mario Bava’s Black Sunday (1960) in its depiction, and amalgamation, of the figures of the vampire and the witch. Fascinating, intoxicating stuff.

With its striking imagery of lonely, snow-covered vistas, and its haunted/hunted central female figure guilty of nothing but trying to achieve her heart’s desire, The White Reindeer is a truly haunting, distinctive and unusual fairy tale horror.
Finnish Film Folk Horror Folklore