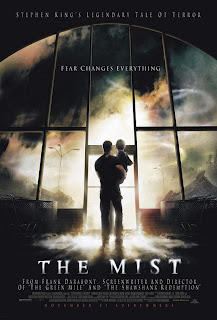 There be evil in yon mist I tells ya!

Stephen King adaptations can be tricky, and often down right schlocky. For every Carrie or The Shining, we get a Silver Bullet or The Mangler. The writer’s work doesn’t always transfer well to the screen and quite often just goes straight to DVD. Not that this is a bad thing, mind... I mean c'mon - look whose blog you're reading here.
Having helmed The Shawshank Redemption and The Green Mile, Frank Darabont is no stranger to King’s scribblings. The Mist provides us with his first adaptation of one’s of King’s horror stories, though it’s easy to see why the director chose this novella to film.
All the ingredients are ripe to make a comfortably formulaic yet usually gripping ‘small-band-of-people-seek-refuge-in-one-location-from-mysterious-force’ movie, akin to Night of the Living Dead or any number of John Carpenter films.
The Mist however, manages to exploit the formula for all its worth and Darabont turns in a finely honed piece of taut and suspenseful cinema that still manages to feel fresh and, most importantly, surprising.

Many of the characters are essentially stock types, i.e. the ‘everyman’ father and his son; the sexy blonde teacher who moved into town a year or so ago and is still viewed as an ‘outsider’, the hard-nosed lawyer from out of town, a couple of beer swilling good ole’ boys, the local bible thumping ‘nut’, the gutsy old lady, the philosophical bag-boy and the doomed young couple who were really-in-love-though-it-took-a-super/natural-apocolyptic-event-to-make-them-realise-it. Each of the cast however provides sturdy performances and tone down the delivery of their inevitable crowd-pleasing comedy-relief one-liners, so as not to ruin the carefully constructed mood of desperation and suspense.

Of course, it comes as no surprise that there is something-lurking-outside-in-the-mist – this is Stephen King after all – but the way in which Darabont slowly, surely makes us realise this, is a real treat. He wisely only offers us tantalising glimpses: a tentacle here, a strange noise there, or with stripped bare, spine-tingling utterances such as ‘there’s something in the mist.’ When things become a bit more obvious though, the constant dread-saturated mood isn’t completely dispelled; events just get more active and tense with bizarre critters and splashy effects. The location becomes suitably claustrophobic after a while and the inevitable stragglers, who every now and again decide they need to go outside to ‘get help’, provide us with momentary relief from the harsh florescent lighting and the hum of the refrigerators in the store. 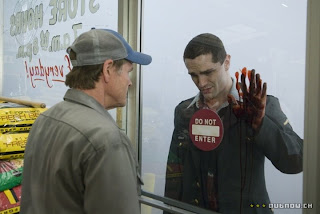 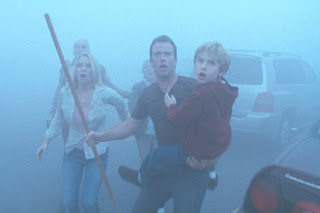 When watching films of this nature it is usually easy for the audience to sit back and point out the mistakes the characters make, smugly assured that they would never be two-dimensional enough to make the same unwise decisions. Go outside into the mist to look for help? Erm, no. Obviously the sensible thing to do would be to stay put and wait for the military to come to the rescue. Right? With The Mist though, Darabont manages to subvert a few clichés and really make the audience think twice about assumptions they have made and characters they have aligned themselves with.
The group of people in the supermarket eventually break into two clear groups: the realists, who try to keep a clear head and deal rationally with the irrational situation at hand; and those who have sided with the fire and brimstone spewing town ‘nut’ Mrs Carmody, who views events as a sign that God is quite mad with humanity and repentance is the only hope. To her credit though, Marcia Gay Harden manages to elicit some sympathy from the audience as Carmody, and really delivers a barn-storming performance. In the hands of a lesser actress, the character would have been reduced to gnashing teeth and frenzied hair.
It is perhaps because of her extremity and unreasonableness that the other characters appear so normal. 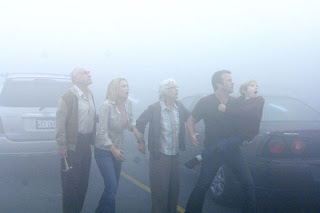 Morality, philosophy, religion and human nature all come under scrutiny from the characters as they debate about what to do. Of course talk eventually turns to what might have caused the mist and the creatures inside it. This is when the film becomes a touch silly. Well, actually, a lot silly. The old cliché of space/time continuums and parallel worlds is dragged out and dusted off, but before we have time to roll our eyes, a long shimmering plot strand explodes and hell breaks loose, momentarily brushing sci-fi jargon under the blood splattered rug.

When we do finally venture out of the chaos of the supermarket into the forboding quiet of the mist, and see the full extent of the destruction outside, Darabont cranks up the Dead Can Dance laden soundtrack to full effect and events take an unexpected Lovecraftian turn.
Without wishing to give too much away, the shock ending will have you reeling as you stumble to reassess previous events and choices characters have made (and the choices/assumptions you made with them as a viewer) and how they led to such nihilism.

‘There be evil in that there mist!’
Adaptation Frank Darabont Horror Film Monster Movie Stephen King The Mist

Anonymous said…
A lovecraftian twist eh!? I must check this out. Great blog James, I'm looking forward to reading more.
9 December 2008 at 00:20

James Gracey said…
lovecraftian indeed - this film was such a pleasant surprise...
thanks for your comment - hope all is well with you harajukujam...
james
;)
9 December 2008 at 10:21

: said…
My favorite American horror film of the last decade, hands down. IMO it's just about the perfect horror movie, save for some not-quite-perfect CGI in the "tentacles under the door" scene -- after that, the CGI is flawless. In fact, I've said on more than one occasion that, with the leviathan creature at the end, Darabont perfectly captured what I saw in my head when I read King's novella. I couldn't believe how eerily close it came . . . .

James Gracey said…
Yes, I think The Mist is VASTLY underrated. I know it rattled a lot of cages, but I thought the ending was just right. A flawless King adaptation.
18 November 2013 at 19:25