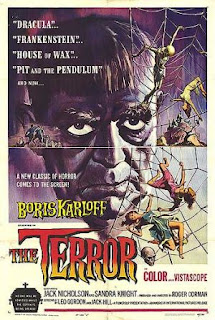 Just after Corman had wrapped up on The Raven, he realised that his star Boris Karloff still had a couple of days left to fulfil in his contract. Rather than let this go to waste Corman did the only logical thing and quickly improvised and made a new film in order to utilise Karloff’s remaining couple of days. Using the same sets from The Raven and some shots from Corman’s other Poe films, a number of other uncredited directors, including Jack Nicolson, produced The Terror in a matter of days.

The story focuses on Poe-esque lone traveller Lt. Andre Duvalier (Jack Nicholson), a French officer separated from his regiment during the Napoleonic Wars. He stumbles upon a mysterious beach and meets an aloof and beautiful young woman called Helene. She gives him water and then disappears. Duvalier traces her to the castle of Baron Victor Frederick Von Leppe (Boris Karloff) and his man servant Stefan (Dick Miller). There Andre realises that something deeply sinister is afoot as he discovers the deadly secrets of the Baron and the bloody history of the castle.

What’s most remarkable about this film is the fact that it was mainly improvised by those involved. The air of mystery is well maintained for most the film until the twisty-turny climax when things just get ridiculous, with one preposterous ‘revelation’ after another. Karloff as usual lends the film a weighty gravitas and really demands attention and is ably supported by everyone else involved.

Corman seems keen to squeeze every bit of tension he can from the creepy proceedings, but sometimes it just comes across like he’s dragging it out to make up the rather lengthy running time. And this film is very long. While the many scenes involving Nicolson languidly wandering around the castle are certainly atmospheric, they lack real tension and soon drift into formulaic skits: Nicolson wanders around the castle alone at night, he hears a strange noise, he looks into a room he was previously told by the Baron to keep out of, he gets locked in, he hears more strange noises, the doors mysteriously open and the ever lush score once again reaches shrill proportions as he goes to confront the Baron. 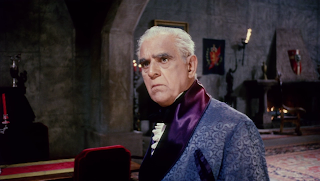 The Terror is beautifully photographed, especially the scenes on the isolated beach and the many interior shots of various people wandering around the eerie the castle.
An almost dreamlike atmosphere is evoked during the films opening scenes with the woman on the lonely shore under the cliffs, wandering around in a trancelike state.
Day for night photography adds a slightly otherworldly sheen to proceedings. Odd lighting and lively camera work also rack up the tension. The film is edited in a way to seemingly disorient the viewer: we cut from extreme close ups to wider shots to panning shots to extreme close ups again and then to some tracking shots. A panic-stricken atmosphere is carefully evoked and Corman entices us further into the intriguing story by brandishing his camera like a weapon – every trick is utilised to keep things interesting: zooms, pans, tilts, tracking shots. While the story may flop in a few places, the way in which it is filmed does not. 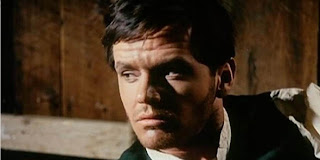 A few other striking images like Helene wafting through the cemetery at night; her night gown billowing behind her in an eerie breeze, pepper the film. Many cryptic conversations between people drop further hints that something sinister is afoot.

As mentioned, Corman has reused several shots from previous films and it would appear he reused a few bits and pieces from the plots of previous Poe films too: the aging Bourgeoisie wrapped in a dark cloud of guilt and madness; the lone traveller who stumbles unwarily into dark goings-on while searching for the woman he loves. Evil doers conspire to drive the unstable antagonist to suicide/further insanity/death by making them believe that they are being haunted by a dead lover from the past. Whereas the previous Poe films often hinted at the involvement of supernatural forces, events were usually revealed to be quite rational and explainable; the opposite is the case with The Terror. Something supernatural is really happening.

The film also ends on quite a pessimistic note and makes you wonder what the hell the whole point of it was. It appears Andre’s efforts were ultimately redundant, and arguably were right from the start. Nevertheless it is still a solid, engaging and effectively made film, if a little uninspiring. Watch The Pit and The Pendulum instead.
Boris Karloff Edgar Allan Poe Horror Film Jack Nicolson Roger Corman The Raven The Terror