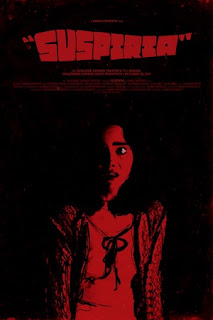 The arrival of American ballerina, Suzy Banyon (Jessica Harper), at a prestigious dance academy in Freiburg, coincides with a series of savagely brutal murders. Suzy slowly begins to realise that the academy is actually a front for a coven of witches led by the diabolical Mater Suspiriorum – The Mother of Sighs – who plans to unleash untold suffering and pain upon the world. With her friends falling prey to evil supernatural powers and no one to believe her seemingly outrageous story, Suzy must face her deadly foe alone…

The first film in a trilogy, Suspiria precedes Inferno (1980) and the only recently completed final chapter, Mother of Tears (2007). With Suspiria, Dario Argento created one of the most vivid, nightmarish and hallucinogenic horror films of all time. Deeply influenced by the drug-addled and lurid writing of Thomas De Quincey, Argento also borrows from Lewis Carroll, the Brothers Grimm and Snow White and the Seven Dwarfs (1937). The dark tale of witchcraft, the occult and fiendishly violent death unfolds like a morbid and highly gothic fairytale; even beginning with a ‘once upon a time’ styled narration.

Events bleed out from under a rage of primary coloured lurid lighting and intense noise. The soundtrack, courtesy of Goblin, is supremely sinister and pulsating and features a cacophony of otherworldly shrieks and rasping whispers. As distracting as this sounds, it actually enhances the experience of watching Suspiria. The viewer becomes utterly immersed in a claustrophobic and insanely nightmarish world where nothing is left to the imagination. The distinct lack of logic, while no doubt forehead-smackingly bizarre, also fuels the infernal atmosphere and adds a grotesquely skewed dimension to proceedings.

Argento’s camera, here lensed by Luciano Tovoli, is as fluid as you might expect. It performs a few startling movements throughout the course of the film. One such moment occurs when Daniel, the blind pianist from the academy, is walking home with his dog at night through a large town square. The camera stalks him from every conceivable angle, even swooping down on him from the roofs of the buildings at one point, in an utterly breathtaking shot.

Jessica Harper as Susy, is one of Argento’s typical heroines: strong, resourceful and determined, if prone to bouts of memory loss: she attempts, throughout the course of the film, to remember several words whispered to her by the girl she met in the storm outside the school when she first arrived. These words are clues to unlock the mystery of the wretched academy.

Argento initially wanted the students to be played by adolescent actresses, but eventually changed his mind. Hey, it seems even Dario Argento has limits. However events in the film still unfold as though witnessed from a young girl’s perspective. Suzy is innocent and seemingly naïve, whilst her class mates play petty jokes on one another and are basically spoiled brats. The teachers, particularly Miss Tanner (Alida Valli), are extremely overbearing and demanding. The actors are dwarfed by the grand set designs and if you look carefully, all of the door handles in the school are quite high up, adding to the child-like perspective of the characters.

The violence is extremely intense and at times unbearable, particularly the opening double murders which feature stabbing, hanging, impalement and the puncturing of a still beating heart with a blade. However, with such an opulent and fever-pitched intro, nothing else in the film can quite live up to the initial intensity conjured by Argento. Things soon dissolve in a murky pool of illogicality. Characters wander around as though in a daze, exploring the ghastly interior of the malevolent building, bathed in swathes of reds, blues and greens, until they meet their gory demises, usually at the hands of unseen and presumably supernatural entities.

Suspiria is considered a classic of the horror genre, and rightly so. No film has ever really come close to touching its intensity, dreamlike qualities, artistic approach to violence or majestic moodiness.

Unknown said…
Nice...love Suspiria. Not all that logical of a story, but it truly is a beautiful film and I wish Argento could still make movies this visually appealing.

James Gracey said…
I share your wish! How utterly amazing would it be if Argento made something like this today?!
And yes, Suspiria was in fact the last film (as far as I know) to use the old technicolour method of transfer. Apparently Argento insisted that Technicolor use the highest possible contrast to increase primary colours. He also used frames made of velour and tissue when shooting the film, and lots of mirrors. Sorry. I'm a total geek when it comes to Argento. :P
4 April 2009 at 22:32

Unknown said…
Yes James you are indeed a total geek when it comes to Argento but you sure do know your shit and I enjoyed watching this film with you last time I was home x
7 April 2009 at 20:32

Simon said…
I just watched this, and yeah, I did notice the doorknobs, but I just ticked it off as a Europeon thing (as I do with all weird European films). This might be the first movie in awhile that's actually scared me, y'know, because up until now the movies are either spoiled by accidental internet viewing or crappiness.
16 May 2010 at 17:33

James Gracey said…
Suspiria is one of those films that never loses its intensity - no matter how many times you watch it! Glad you enjoyed it.
17 May 2010 at 11:13