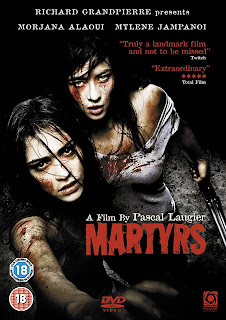 Anna (Morjana Alaoui) and Lucie (Mylène Jampanoï), two girls with revenge on their minds, track down a family who held one of them captive as a youngster. Their quest for vengeance and knowledge leads them on a gut-wrenching and depraved journey into the dark recesses of pain and suffering, anguish and torture.

These are just a few of the words that have been used to describe the jaw dropping spectacle that is Martyrs. The thing is though, they are all actually true. However, no words can really be utilised to fully prepare you for the visceral onslaught you will experience (undergo) while watching this breathtakingly extreme film. Daily Mail readers in particular, beware.

Martyrs begins as an archetypal horror film and is so convincing in doing so that it has us fooled for a while. We feel we know this type of film so well. Horror fans in particular will relish the whole new direction events will drag them in. As soon as you start to think you know what’s going on, the story swerves into uncharted territory. And it continues to swerve and tease throughout.

Martyrs toys with the conventions of the horror genre like a sadistic cat mercilessly clawing and playing with a defenceless mouse. Genre and audience expectations are shredded and left to bleed, much like the protagonists, all over the place. The film offers up a few genuine surprises along the way and several plot twists are used here that other, lesser films would have saved for their climax. 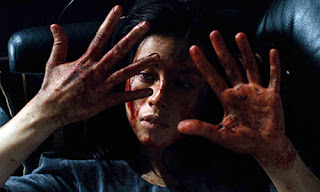 The film begins intriguingly with a young girl, Lucie, fleeing from a warehouse she’s been held captive in. For how long we know not – this is just the first of many questions Martyrs poses throughout its running time that will have you salivating for answers. All we know for now is that she is battered and bruised and bloody and running for her life. The stark imagery recalls the famous photograph, by Nick Ut, of a young girl running bleeding and naked from the bombed Vietnamese village of Trang Bang in 1972. After we follow her experiences at a children’s home and her tentative friendship with another girl, Anna, the narrative follows Lucie as she bursts into the house of her suspected former captors as they sit down for breakfast. At this stage, the film briefly resembles a typical ‘home invasion’ flick akin to Funny Games or Ils (Them); however it soon becomes obvious this is not how things will continue to play out.

Like the subject matter, the film soon transcends this approach and adopts an almost spiritual glean as a meditation on the nature of suffering, guilt, redemption and existentialism unfurls from beneath the bloodshed and endless torture.

The violence – and there is a lot of violence – is blunt and realistic. Nothing occurs to lift the audience out of the film, such as CGI or spasmodic editing (a common staple of today’s impatient and stylised horror flicks; all strobe cuts and hyper pacing). Every blow that’s dealt in this film plunges you deeper into its murky depths. At one stage though the violence just simply becomes unbearable, and its methodical and systematic occurrences run the risk of rendering it mundane and numbing. One suspects this is the point though, as a commentary on violence in horror and why we as an audience choose to experience this facet of cinema. Laugier seems to be saying that if we want violence and suffering then we’ve come to the right place. However he is not just content to create scenes of bodily devastation – he also wants us to think. We are almost snapped out of the story into the realm of repeating ‘Its only a movie, its only a movie’, before we are yanked off into another extraordinary direction and sucked back into the compelling story... 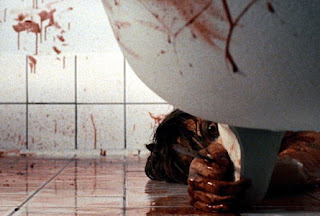 The acting is solid throughout and the special effects courtesy of the late Benoit Lestang, are startling in their simplicity and effectiveness. The morality and ideology of the film, for all its physiological horror, maintains a contemplative and almost spiritual essence – a rare thing in the genre. Something undeniable pulls us into the midst of it all and holds our attention – the audience will find itself wanting answers.
There is a lofty justification for the bloodshed and pain, which successfully negates crassness and even pretension and goes some way to reflect contemporary society’s evolving attitudes towards what counts as ‘suffering’ and our need for answers concerning our place in this universe and what comes after...

The dénouement, when it comes, is utterly surprising and yet truly fitting for a film that dares to be so different.
A transcendental horror film guaranteed to jolt your thoughts as much as your nervous system.
European Film French Horror Film Horror Film Review Torture-Porn

dylan said…
The more I think about it, the more I like this film. I must take another look. Although the long sequences of torture sort of bored me and made me dislike the film some. But the end saved it for me, even though I was fully expecting to be let down.
4 June 2009 at 01:51

said…
First off I just found your blog and plan to make regular visits.

Secondly I agree with your assesment of this film. I am not a big fan of Hostel-style films myself. I prefer my gore to be more of the John Carpenter/David Cronerberg/Clive Barker style fantastical style stuff (Did that make sense?)

However MAYTRS and to a lesser extent INSIDE really rocked my world. As I said on my own blog the ideas of the film haunt me as much as the images.
4 June 2009 at 03:25

James Gracey said…
I sort of went into this not really knowing what to expect. I had read a review in a magazine that was deliberately vague, but extremely positive, so my interest in checking it out was very strong.

Dylan, I completely agree with you about the long sequences of torture, particularly towards the end. It was then i sort of started to stop investing as much as i had been in that character. although i was soon dragged back in by the end - which kind of blew me away a little bit..

Cheers Al. Its true - the ideas behind this film are completely haunting. it really got under my skin. There was certainly a lot of Clive Barker-type imagery towards the end of this one. Hellraiser eat your heart out!
I haven't seen Inside, but will hopefully be checking it out soon. cheers for stopping by, dude.
4 June 2009 at 10:52

dylan said…
I haven't seen Inside in awhile, but I thought it was pretty meh. I heard how shocking it was suppose to be, but it wasn't anything life changing. I'm interested to hear what you think.
7 June 2009 at 04:04

said…
Well I for one think that INSIDE may have a viseral edge but I don't think it will ever see classic status- I think MAYTRS will.
7 June 2009 at 05:12

Mykal said…
BTC: OK, I'm sold. I'll give this one a try. Like the idea of violence that is plain, brutal and direct - not made false and spectacular by CGI - also liked the concept that you touch on, the spiritual aspects of the theme. I'll put this one in my Netflix queue. Good review. Nice blog. I'll be back. -- Mykal
9 June 2009 at 18:02

Anonymous said…
James-
I was vastly underwhelmed by "Martyrs". Your take on the film was so eloquent and thought provoking that I may give it another try.
I do think it is a well made film that has redeeming qualities. So who knows, the second time it may really speak to me.
9 June 2009 at 18:04