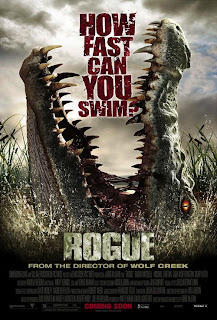 A group of tourists are forcefully nuzzled down the food chain when they encounter a giant crocodile whilst exploring the lush and eerily beautiful backwaters of Australia’s outback.

Director Greg Mclean is well known to horror audiences for his grim and ultra-sadistic feature debut Wolf Creek. With Rogue, a tense and nasty giant crocodile Creature Feature, the director has turned from the horror of man to that of nature – and proves it is every bit as harrowing.

With a cast of likeable characters (including Radha Mitchell, Michael Vartan and Sam Worthington), a sturdy script, seductively lush cinematography, a haunting and evocative score and a very realistic monster, Mclean has deftly side-stepped the quagmire of horrendously bad giant croc films such as Primeval and Crocodile to deliver a genuinely pulse-pounding and effective chiller that begins as an ominous ripple and ends with an almighty, blood-soaked tidal splash.
Intrigued? Head over to Eye for Film to check out my full review…
Australian Horror Giant Crocodile Greg Mclean Monster Movie Ozploitation Rogue Survival Horror