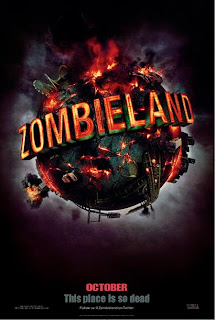 A small group of people team up to seek sanctuary in a world overrun by zombies.

Zombieland, unsurprisingly is a zombie film. The title sort of gives it away. In a similar vein to the likes of Shaun of the Dead however, it’s a comedy zombie film dealing with the aftermath of a global event that has turned the world’s population into maurading living-dead.

Zombieland, again like Shaun of the Dead (note the comparison - yes, its actually THAT good) and unlike so many other zombie flicks, doesn’t concern itself with why or how the world’s population have become slathering, flesh-hungry, blood-thirsty zombies. There is no subplot about environmental issues, global pandemics or chemical warfare. It’s not that kind of film. Instead, it plonks us down in the midst of a small number of survivors already in the thick of this dark new world and whisks us off with them as they travel across the States to find a safe haven amidst the carnage and apocalyptic mayhem. Whilst not completely original (can any zombie film be completely original anymore?), the approach director Fleischer utilises to tell the story is fresh and appealing - he isn’t so much concerned with the situation as he is the characters thrust into it and how they deal with it. While he favours chuckles over chills, make no mistake – there is still an awful lot of bloodshed in this - usually courtesy of Woody Harrelson's character Tallahassee who has a penchant for slaughtering zombies in the most graphic way he can - but it’s all so over the top it sits comfortably within the overall tone of the film. 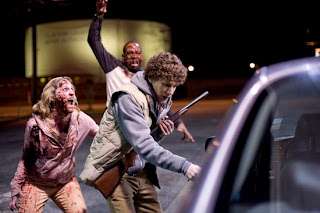 The focus of the film is the dynamics between a likable bunch of characters that have severe trust issues with each other – not helped by the two girls tricking and conning the guys during their first encounter with them in a deserted supermarket. To begin with the group don’t want to get too close in case they form emotional attachments and subsequently suffer a loss. They don’t even know each other’s real names but have given each other nicknames: Columbus Ohio (Jesse Eisenberg), Tallahassee (Woody Harrelson), Wichita (Emma Stone) and Little Rock (Abigail Breslin). The characters are perhaps so amicable because of the sturdy cast portraying them. They eventually realise that they kind of enjoy each other’s company as it can get quite lonely on the road when you’re in the minority and everyone else you come in contact with is dead. And hungry for your flesh. The cast are of course strongly aided by sharp, witty dialogue, amusing character traits and deft one-liners and observations – particularly the neurotic and nervous Columbus as he narrates proceedings whilst accompanied by amusing onscreen graphics. 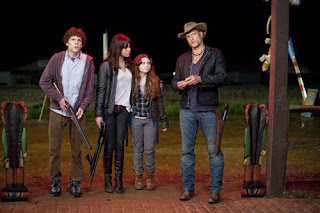 I dare say most fans of zombie flicks have a contingency plan for when zombies attack. I know I do. Columbus is obviously of a similar disposition, and throughout the film he constantly refers to his list of survival rules and wittily explains how he came to compile such a list. His survival tips appear as little comedic interludes, but also go some way to convey how the world ended up as it is, as does the opening title sequence, in all its slow motion glory. Indeed, the dystopian landscape they traverse throughout the film is littered with the remnants of civilisation before the zombie invasion - these images convey so much without the need to have it explained to us through exposition: vast, empty motorways piled high with burnt-out vehicles, eerily deserted towns and charred corpses lining the roadsides.

A few cool cameos – including a completely unexpected one that I won’t give away because hopefully it will pleasantly surprise you as much as it did me – include Mandy Lane herself, Amber Heard and Mike White as Victim in Bathroom, and are sure to spread a wide smile across your face.

At times events are genuinely touching, such as Tallahassee’s flashbacks and Columbus’s observations on how he is really only starting to live his life now that everyone else is dead. Luckily, these moments don’t become immersed in second-rate saccharine-coated sentimentality, instead they shed some more light on the characters backgrounds, heap more flesh on their bones and move on before becoming indulgent. 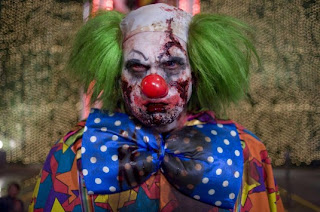 When the group eventually flee their little Beverly Hills utopia, things begin to become quite tense and the film thunders towards a surprisingly taut, yet still crowd pleasing climax that unfolds in an amusement park. By placing certain characters in danger and cranking up the tension, Fleischer ensures viewers will remain gripped throughout proceedings, all the way to the candy-coated, blood-spattered finale.

Mykal said…
James: Great review (as usual). I haven't heard a negative thing yet about this film, but your review tells me what makes it so strong. I'm in! I may actually spring for a ticket for this one. -- Mykal
13 October 2009 at 17:22

mge said…
I've read tons of good reviews regarding this movie. The cast is excellent too.

I think I'll abandon my comfortable couch and buy a ticket for Zombieland. It's been ages since I last saw a zombie flick in a movie theater. The last one was 28 Weeks Later, which was OK, but Zombieland seems much better.
19 October 2009 at 19:37