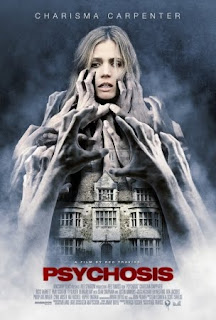 When horror novelist Susan (Charisma Carpenter), relocates to the rural English countryside from sunny California to recover from a nervous breakdown, her life begins to slowly unravel as she experiences unsettling and horrific visions. Could the blood-spattered sights be real, or the result of her increasingly fragile and unhinged mindset?

A multi-layered, frequently engrossing contemporary horror story, Psychosis successfully combines many of the elements that made British horror films of yore so memorable – off-beat mystery, hints of supernatural threat, quirky characters, psychological intrigue and bloody murder. Director Reg Traviss attempts to evoke twisted classic chillers from British cinema past, combining an off-kilter and edgy energy reminiscent of more contemporary horror fare with a classic British sensibility which draws on the old ‘Hammer House of Horror/Tales of the Unexpected’ school of terror.

I recently had the pleasure of interviewing director Reg Traviss and various other key members of the cast and crew of Psychosis. The feature I scribbled appears in this month's issue of Gorezore (issue 58). You can pick up a copy here, or from all well stocked newsagents, for a more indepth look at the making of this film. Huzzah!
British Horror Charisma Carpenter Ghost Story Psychological Horror Reg Traviss

Christine Hadden said…
I remember you mentioning this one a while back, and I'm equally as intrigued after reading your review. I love a good, old-fashioned chiller. Wonder how long I'll have to wait over here in the states to see it?
And the damn ocean strikes again.
22 July 2010 at 04:00

James Gracey said…
Yeah, this is nay bad. I'm actually thinking it might be an idea to check it out again - see how it holds up after the initial viewing. I think it has enough going on to merit a few viewings...