Featuring stories by and about women, XX is a potent horror anthology written and directed by Jovanka Vuckovic, Annie Clark, Roxanne Benjamin, Karyn Kusama and Sofia Carrillo. It features four distinctive segments and an interstitial piece, which, amongst other things, explore themes of motherhood, familial dysfunction, loss and social isolation.

By their very nature, anthology films can vary greatly in content, style, structure, tone and pacing, particularly ones involving contributions from several filmmakers, and the constant interruption of the narrative flow when we pull back to the framing story can be jarring. When done well though, we get the likes of XX, which unfurls as a macabre collection of unsettling stories that leaves a deeply haunting impression.

Written and directed by Jovanka Vuckovic (The Captured Bird, former editor of Rue Morgue), and adapted from a short story by Jack Ketchum, The Box is a dark, upsetting tale that delves into parental fears of helplessness. When he peeks inside a box carried by a mysterious man on a train, Susan’s young son refuses to eat anything and begins to fall ill. Before long, Susan (Natalie Brown) can only look on as he slips further into a deathly malnourished state and, when he shares the secret of what he saw inside the box with his sister and father, and they too stop eating, her whole family begins to slip away from her. Vuckovic keeps things ambiguous (we never find out what the son glimpses in the box). Indeed the box and its contents are arguably just a MacGuffin – the real point of the story is to explore Susan’s sense of isolation within her own family, the confusion and helplessness she feels when her family exclude her by not sharing the dark secret that is consuming them, and the eventual desperation, grief and survivor’s guilt that take over her life. Initially quite passive, even dismissive of her son’s refusal to eat, Susan is eventually left alone, powerless, and haunted as much by her grief as she is doomed to a futile search for the mysterious stranger and the ultimate truth of why this happened to her and her family.

Mary (a terrific Melanie Lynsky) has a need for everything to be perfect, not least her young daughter Lucy's impending birthday party. Her plans are thrown into chaos when she finds her husband dead in his study, apparently having taken his own life. Directed by Annie Clarke (aka St Vincent), and co-written by Clarke and Roxanne Benjamin, The Birthday Party, while darkly humorous, eventually becomes quite stressful. The film's most unsettling moment comes when Mary quickly decides to conceal the body so the party won't be ruined. While it seems Mary's desperation to protect her daughter drives this decision, one can't help but feel she's doing it for her own sake too, to save face. Clarke makes deft, satirical swipes at the fickle, competitive ‘one-upmanship’ of middle-class suburban life and the resulting unhappiness and loneliness it can bring. Brief, prickly exchanges with the icy housekeeper and an intrusive neighbour, and the moment she confides her worries to her husband before she realises he's dead, tell us so much about Mary. Her obsession with outward appearances masks the self-doubt she is consumed by, and her strained smile eventually slips as her worst fears are splayed out for all to see. Her chicly modern, glass-walled home soon resembles a glass cage, which serves to highlight the constant scrutiny she feels from the people in her life. The idea that some parents go to great lengths for their children, would do anything for them, but are actually doing more harm than good, fizzles throughout proceedings.

Don’t Fall is the tale of a group of friends who fall foul of demonic possession while exploring a secluded mountainous area. Stunning landscapes are captured with some beautiful photography which also helps to convey just how remote and isolated a location the characters are exploring is – and how helpless they will be if anything goes wrong... Much of the running time is spent with them as they explore, joke around and tease each other. Gretchen (Breeda Wool), the one who eventually becomes possessed, seems especially sensitive and susceptible to teasing. The ominous petroglyphs discovered by the group hint at a tantalising lore and possible mythos left unexplored (no doubt due to the limited running time). No stranger to anthologies, writer and director Roxanne Benjamin (Southbound, V/H/S) cranks the foreboding tension nicely until all hell eventually breaks loose and she goes for broke with some vicious hyper-violence. However, the story of a group of friends stranded in a remote location and coming under supernatural attack feels all too familiar. While still very enjoyable and creepy, it is the weakest segment – but mainly because the others are so strong and effective. 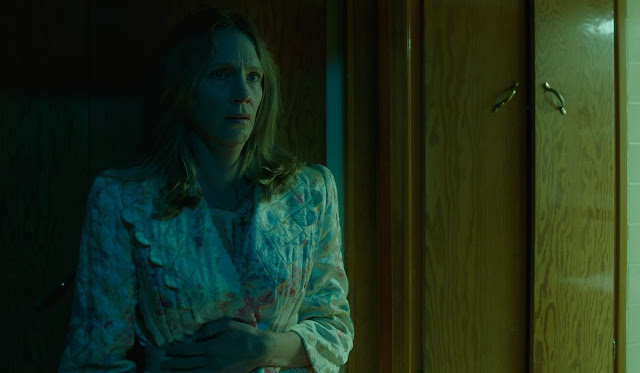 Karyn Kusama’s (Jennifer’s Body, The Invitation) segment, Her Only Living Son, is like a condensed, unofficial sequel to Rosemary’s Baby, and it ensures XX goes out with a resounding bang. Cora (Christina Kirk) and her son Andy (Kyle Allen) live a quiet, isolated life in a secluded house outside town. They have moved around a lot throughout his life, as though running from someone. Or something. As Andy's 18th birthday approaches, Cora becomes increasingly anxious, and she notices changes in his personality. Flashbacks, snippets of dialogue and Cora’s interactions with several other characters convey the hardship she has suffered, and the sacrifices she has made to seemingly keep them safe and at arm’s length from Andy’s estranged father, a Hollywood actor, and someone her son has become very curious about. The hinted-at encroaching threat posed by this distant father figure ensures proceedings are suitably foreboding. However, it becomes apparent that this individual is not Andy’s biological father… When Andy attacks another student, the resulting meeting between Cora, several teachers and the other student’s mother takes a very sinister turn that harks back to the paranoid, conspiratorial aspects of Polanski’s chiller, and convinces Cora that a Devil cult (once again, or maybe even just still) has designs on her son. Kusama reveals things very gradually, and subtly, and they are even more terrifying for this quiet approach. This is creepily rendered as it slowly becomes apparent that the few people Cora interacts with, including a friendly postal worker, gradually seem like they know something, and are insidiously involved in it...

Despite the creepy satanic revelations, the film’s power and resonance resides within the parallels it draws with abusive relationships that refuse to remain in the past. It is obvious Cora's past haunts her every waking moment, and that constant threat of an ex-partner violently reappearing after all these years is masterfully conveyed. Her Only Living Son has an especially strong emotional resonance because it is grounded in the increasingly fraught relationship between a mother and her son. It’s apparent that for a long time, they have been each other’s worlds, and now Andy is turning 18, she fears not only losing him as he grows up, but losing him to his diabolical father who, until now, has shown no interest in their son. As the world weary and cautious Cora, Christina Kirk delivers an utterly compelling performance as a woman who has seemingly been through hell and back and done everything in her power to provide for her son and ensure he has had a loving and normal a life as she can provide. Like Clarke’s segment, Kusama’s also culminates with a birthday celebration, but has a devastating outcome.

The framing, interstitial piece – a morbidly gorgeous stop-motion animation piece by Sofia Carrillo – is essentially the fifth film of the anthology. Between the main segments, its fragmented narrative features a walking dollhouse with a doll’s face that scuttles around the vast interior of a seemingly empty house, collecting various objects which it conceals within itself before eventually placing a dead bird into the chest of a young sleeping girl.

The short films that comprise XX pack an emotional wallop (especially Kusama's), and their brief running time belies the nuanced, complexly drawn characters whose lives don’t start and stop as each segment begins and ends. It is testament to the strength of each screenplay, and the performances of the leads, that these characters appear to have inner lives and personal histories. My only criticism is that the stories and characters were so intriguing and compelling that I wanted more.
Annie Clark Anthology Female Gothic Jovanka Vuckovic Karyn Kusama Roxanne Benjamin Sofia Carrillo