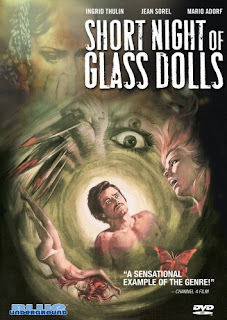 Whilst lying on an autopsy table, motionless but conscious and in some sort of cataleptic state, American journalist Gregory (Jean Sorel) recalls how he was desperately searching for his missing girlfriend Mira (Barbara Bach) in Prague, when he fell foul of a mysterious order of social elites who thrive on the ‘life essence’ of the younger generation. As he relays his story, he attempts to solve his own ‘murder’ before it is too late and the surgeons begin performing their autopsy on his still warm body.

Whilst not a typical giallo boasting black-gloved and psychologically traumatised killers, like The House of Laughing Windows, Short Night of Glass Dolls transcends conventional giallo fare and establishes itself as a thoughtful, provocative, atmospheric and highly effective thriller with distinct espionage elements and a serious allegorical message. The film begins with the discovery of the protagonist’s body in a park in Prague, recalling other films such as Double Indemnity and Sunset Boulevard in which the central character narrates the tale from beyond the grave. It turns out that he's actually not dead though. This provides the film with its first of many startling and idiosyncratic revelations. A fragmented exploration of Gregory’s last days then begins. Events are told in flashbacks as Gregory lies motionless on the autopsy table or on a slab in the morgue, his recounting of events taking us closer and closer to how he ended up where he is as his voice-over becomes increasingly frantic. Each flashback segment takes us deeper into the mystery and is signalled by a series of rapidly edited shots of images that will feature in the flashback. The effect is both alarming and teasing. 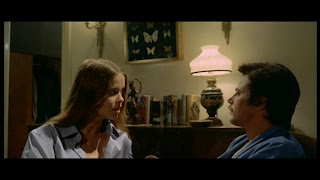 Lado’s camera often appears weightless, floating and gliding after the various characters as they sink deeper and deeper into a dark and sordid world of political espionage, secret societies and perverted acts of decadence. Lado has a knack for creating breathlessly beautiful images and the film is laced with interesting and captivating shots. One such moment occurs when Gregory has been chased into a dark room by mysterious pursuers. Standing in the darkness he can just about make out something white floating in front of his face. As one of the pursuers suddenly bursts into the room throwing light into it, he sees that the floating white form was a vase of lilies in the middle of the room under a vast crystal chandelier. Just as the door opens, Gregory jumps back into the shadows to hide.

Another standout set piece occurs towards the end of the film when Gregory returns to his apartment and hallucinates that Mira’s body is in his fridge. The style in which this scene is shot adds to its alarming and nightmarish atmosphere. The music throbs, the lighting becomes quite hellish and camera tilts and prowls the apartment as Gregory succumbs to hopelessness and panic. Other images and moments appear to have a certain degree of dramatic emphasis attached to them, as though they were signifying something. Even the repeated shots of a crystal chandelier eerily clinking as a breeze blows through it, seems to possess a degree of menace and weighty meaning.

Like all good gialli, this film is awash in shoals of red herrings. Gregory’s colleagues arouse our suspicion from time to time. Jacques Versain (Mario Adorf – the eccentric cat-eating artist in Argento’s The Bird with the Crystal Plumage) is a burly, Oirish/Scottish/badly dubbed reporter who believes Gregory's bizarre theories. Jessica (Ingrid Thulin), Gregory’s former lover and wearer of various psychedelic head scarves, insists Mira simply ran out on Gregory, and reminds him that he did the same thing to her in the recent past. Something tells me she might be jealous of Mira. 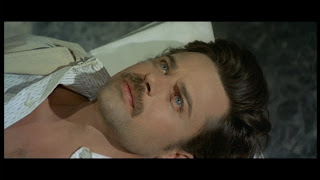 The film also serves as a sly allegory addressing the destructive nature of totalitarian governments, like the one in power in Czechoslovakia at the time. The weird socially elitist members of the cult represent overpowering authoritarian systems in which the higher classes literally suck the life out of younger generations, those less well off and anyone else who opposes them. The older generation is depicted as inherently sinister in this film. The disdain and suspicion of the elderly middle class is exhibited clearly in the scene in which Gregory sneaks into the goldsmiths building and into a room full of elderly people in evening dress listening to a classical concert. They sit motionless and look uncannily like the undead ghouls in Carnival of Souls. Stanley Kubrick’s Eyes Wide Shut would echo events in Short Night in its portrayal of a man wandering through a foreign and threatening city whilst uncovering the existence of a mysterious social elite who revel in orgiastic gatherings and indulge in the odd spot of human sacrifice. Indeed both films unwind as languidly and cautiously as each other, spinning tension and intrigue like silken thread as they go. 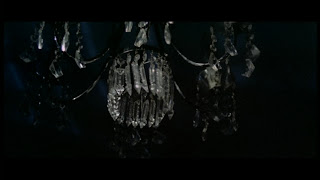 Apparently Lada wanted to title the film Malastrana, which is the name of the district in Prague where the goldsmiths are based. His producers insisted on Short Night of the Butterflies, a reference to the butterfly theme that runs throughout the film. However it soon transpired that another film at the time boasted a title referring to butterflies (The Bloodstained Butterfly), so the film was renamed Short Night of Glass Dolls. The butterfly theme ties in with Mira and the film’s overall allegory of socially superior classes vampirically draining the life from others. Her beauty was the reason she disappeared. She was young too, and metaphorically speaking, had her ‘wings clipped’ too soon. Interestingly, and strangely appropriate, the collection of butterflies she gives in a frame as a gift to Gregory were a specific species that can’t fly.

Al Bruno III said…
I am not a devotee of giallo films but your well written article leaves me very interested in tracking this one down.
14 March 2010 at 14:57

Shaun Anderson said…
Great to see this reviewed - this is my personal all time favourite giallo. It has everything you could want; a brilliant and inventive way of explaining the narrative, impressive visuals, political subtext...and of course Barbara Bach! it is also not as self-conscious and self aware as other gialli giving it a refreshing flavour that makes it stand apart from its contemporaries. If you havent already James, check out Lado's other giallo "Who Saw Her Die?" - it's rather good too.
14 March 2010 at 18:16

James said…
Al - This title is well worth checking out - would make a great intro to the lurid world of the giallo film...

Shaun - Thanks for the recommendation. I actually picked up Who Saw Her Die? a few weeks ago on VHS in a charity shop in town. Rock! I'll hopefully be able to check it out this week.