Showing posts from October, 2021
Show All 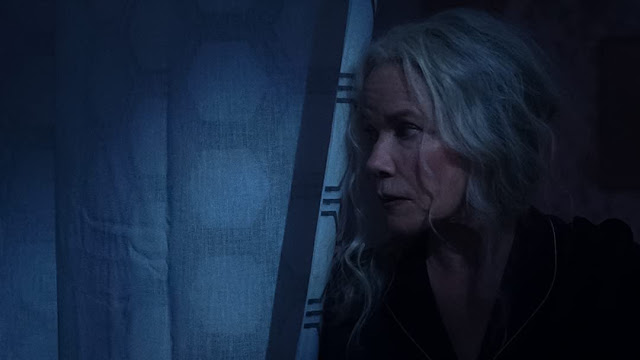 After suffering a stroke, former dancer Judith Albright (Barbara Hershey) moves into a nursing home, only to discover a supernatural entity is preying on the residents. Written and directed by Axelle Carolyn, The Manor is not only a creepy and compelling work, but is also a sensitive examination of themes concerning old age, independence, and vulnerability. Carolyn’s screenplay demonstrates, in an unforced way, how unsettling and frustrating it can be for older people to move into a care home, experience a loss of independence, and be (however well-intentioned) treated like children by those who care for them. The story is familiar: upon arriving in a new home, a character suspects that not all is as it seems. She gradually becomes aware that something sinister and possibly supernatural is invading the space, yet no one believes her, citing her recent traumas and overactive imagination. During her first night, Judith glimpses a dark figure lurking over the bed of her roommate. Before
Post a Comment
Read more

With elements of possession and body horror, Saint Maud unfolds as a moody, unsettling exploration of trauma, loneliness, guilt, and misguided religious conviction. Written and directed by Rose Glass, it tells of palliative care nurse Maud (Morfydd Clark) who is assigned to look after terminally ill dancer Amanda (Jennifer Ehle). Their relationship becomes increasingly intense and obsessive as Maud believes she has been tasked by God to save Amanda’s soul. Rose’s screenplay and suggestive direction carefully evoke the insular worlds these women have shut themselves up in. They live their lives in darkened rooms and solitude. Amanda quietly rages in her lonely house upon a hill, where the curtains are constantly shut to block out the light. Struggling to come to terms with her own mortality, she drinks heavily and reminisces on her glory days. Maud meanwhile drifts unanchored in an internalised world searching for meaning. A purpose. As a care worker she knows all too well the fragilit
Post a Comment
Read more
More posts