Showing posts from December, 2010
Show All

A year ago last week, the movie world mourned the loss of one of it’s most original and strikingly innovative contributors - writer/director/producer/actor Dan O’Bannon. As the screenwriter of classic genre films such as Alien and Total Recall and cult favourites Dead and Buried, Dark Star and Return of the Living Dead , O’Bannon really made his mark on the world of genre cinema. To commemorate the anniversary of his death and celebrate his film work, The Blood Sprayer is just rounding up a whole week of articles dedicated to an appreciation of everything 'Dan O’Bannon.'
4 comments
Read more 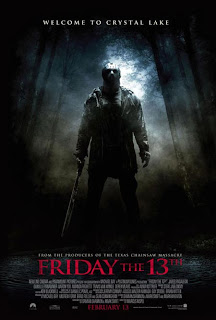 Dir. Marcus Nispel When his younger sister becomes the latest person to go missing during a camping trip to Crystal Lake, Clay Miller sets out to find her, with or without the help of the local police. Falling in with a crowd of teens staying in a holiday chalet on Crystal Lake, he is joined by sympathetic Jenna in his search of the local area, while her friends remain at the house to party. Before long it becomes apparent the area is stalked by a hulking psychopath who abducts and murders anyone who encroaches upon the grounds of an old summer camp… It would seem those old campfire tales of a hermetic psycho named Jason Voorhees may have had more of a grounding in reality than anyone ever dared dream of… Let the blood run free! When it was originally conceived, the remake of Friday the 13th was intended to be an origin story, detailing the genesis of mass murderer Jason Voorhees. Writers Damian Shannon and Mark Swift, who had previously worked on Freddy vs. Jason for New Line
8 comments
Read more 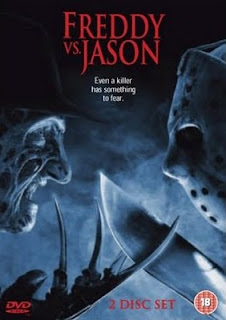 2003 Dir. Ronny Yu The memory of Freddy Krueger has been collectively suppressed and vanquished from the youth of Springwood – rendering him powerless and incapable of claiming any more victims. The dream-dwelling killer resurrects the brutish Crystal Lake marauder Jason Voorhees and manipulates him into going to Springwood to carve up a few teens and strike fear and chaos into the community once again. Only problem is, once Jason starts a-killin’, there’s just no a-stoppin’ him. There’s eventually a big show down between the pair and some unfortunate teens who get stuck in the middle of it all… Since the initial idea of filming a face off between Freddy and Jason way back when Friday the 13th Part VII: The New Blood was being developed, there had been numerous screenplays by a plethora of writers over the course of a decade that tried to flesh it out and make it a reality. The show-down between two of horror cinema's most iconic antagonists was stuck in development hell a
Post a Comment
Read more 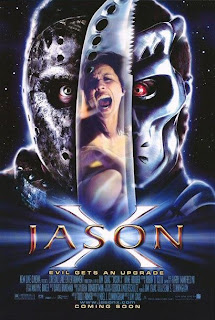 2001 Dir. Jim Isaac In the near future a team of government scientists finally succeed in capturing and containing the seemingly indestructible killer Jason Voorhees. They plan to cryogenically freeze him, but not before he breaks free and slaughters all but one of them. Sole survivor Rowan lures him into the chamber but is frozen in time with him. Flash forward to the year 2455; earth is an uninhabitable wasteland, devoid of life. Jason and Rowan are discovered by a team of interplanetary explorers and taken back to their ship to be thawed out. Newly revived, Jason does what he does best. Murderlises people. In space (!). The final shot of Jason Goes to Hell: The Final Friday AKA Friday the 13th Part IX promised us a confrontation between Jason and Freddy Krueger. Indeed, with that ‘final’ instalment of the series and with Krueger’s own franchise coming full circle with Wes Craven’s New Nightmare , the time to bring both villains together in one diabolical showdown was perfe
7 comments
Read more 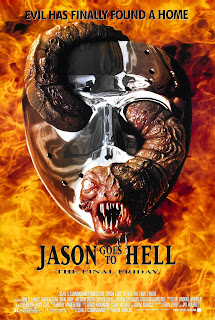 1993 Dir. Adam Marcus Jason is blown to smithereens by the FBI while up to his old tricks at Crystal Lake. During the autopsy however, his demonic spirit possesses the coroner who sets off on a killing spree, in search of Jason’s hitherto unmentioned niece, Jessica: the only person who can stop him once and for all. With his spirit jumping from person to person by way of a parasitic heart-demon (!) rendering those it possesses indestructible, it won’t be an easy task for Jessica to defeat him… “ Through a Voorhees was he born... Through a Voorhees may he be reborn... And only by the hands of a Voorhees will he die .” Another year, another Friday the 13th movie which claimed to be the last in the series. Wasn’t that supposed to be The Final Chapter back in ’84? My brain hurts. New Line Cinema now owned the rights to the series (well, to the name of 'Jason Voorhees', anyway), and Jason Goes to Hell: The Final Friday was also the first film in the series since the ori
6 comments
Read more 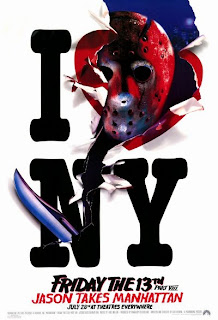 1989 Dir. Rob Hedden When an anchor snags an underwater electricity cable at the bottom of Crystal Lake, the power surge reanimates the dormant corpse of Jason Voorhees who winds up onboard a boat filled with teens heading to New York to celebrate their graduation. Bloodless carnage and dreadful Eighties rock music ensue. While Freddy vs. Jason had been on the cards for some time, but wouldn't come to fruition for years yet, due to creative differences between New Line and Paramount, the two horror icons actually did go head to head back in 1989 (albeit at the box office and from within their own respective franchises). New Line released A Nightmare on Elm Street 5: The Dream Child at the same time Paramount was releasing this, the eighth instalment of the Friday the 13th series. Often considered the worst of the sequels (which arguably isn't very fair, or true!), Jason Takes Manhattan is, while terrifically good fun, also a wee bit of a mess. While director Hedden
9 comments
Read more 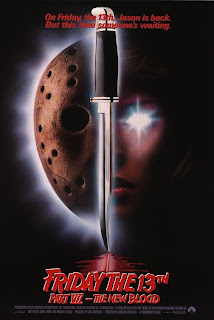 1988 Dir. John Carl Buechler Several years after Tommy Jarvis chained him underwater at Camp Crystal Lake, Jason Voorhees is accidently resurrected by a troubled young woman with psychic powers. It isn’t long before a bunch of teens staying in a house by the lake get brutalised by old Hockey Mask Face before a showdown with Tina, the telekinetic teen ensues. Jason vs. Carrie , anyone? " There's a legend around here. A killer buried, but NOT dead. A curse on Crystal Lake, a death curse. Jason Voorhees' curse. They say he died as a boy, but he keeps coming back. Few have seen him and lived. Some have even tried to stop him. NO ONE can. " The New Blood originally started out as Freddy vs. Jason , but neither New Line nor Paramount could come to any agreement about how to bring about this clash of the slasher titans to the big screen. It would take many years for this film to be produced. There’s no doubt though that Part VII was heavily inspired by the suc
4 comments
Read more
More posts