Showing posts from November, 2019
Show All

An alien riddle from award-winning writer and graphic artist Andreas, fully collected in English for the first time by Titan Comics. The last survivors of a mysterious sea voyage have begun to disappear in unnerving ways, and eponymous hero Cromwell Stone must solve the mystery before it catches up with him. The truth rests on an otherworldly key stolen from that ship, which will set him on a darker, stranger path... To read my review of this collection of graphic stories, head over to Exquisite Terror .
Post a Comment
Read more

Under the Shadow is the slow-burning and intensely creepy feature directorial debut of Iranian filmmaker Babak Anvari. It is ripe with socio-political commentary. And utterly terrifying. Utilising a culturally specific entity from Iranian mythology, Anvari confronts uncomfortable truths of certain cultural realities, particularly those experienced by women. By setting the story in Tehran during the Iran–Iraq War (1980–1988), when the city was repeatedly targeted by airstrikes in which thousands of civilians lost their lives, Anvari also addresses the traumatic realities faced by ordinary people living in a war-torn society. When her doctor husband is suddenly transferred to treat the injured at the frontlines, Shideh (Narges Rashidi) and her young daughter Dorsa (Avin Manshadi) remain at home. As missile attacks on the city occur almost daily, mother and daughter spend long periods of time in the bomb shelter beneath their building. Their relationship soon becomes strained as th
Post a Comment
Read more 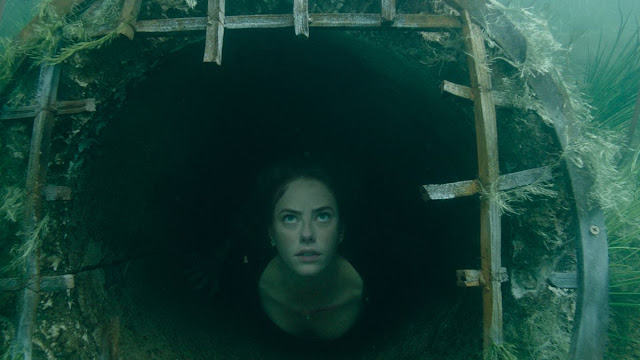 With Haute Tension ( Switchblade Romance [2003]), director Alexandre Aja supplied one of the most intense and stressful home-invasion horrors of the 21st century and instigated a wave of transgressive, brutally violent French films collectively known as New French Extremity cinema. Crawl , while nowhere near as searing as Aja’s early work, does see him return to home-invasion territory; albeit with an irresistible man vs nature element. Truly refreshing in its minimalism and back to basics approach, it boasts a rollicking and extraordinarily simple premise (it’s a concept movie, basically): when a massive hurricane hits their small Florida town, Haley (Kaya Scodelario), her father Dave (Barry Pepper) and their dog Sugar (Cso-Cso) find themselves trapped in their basement and have to contend with rapidly rising floodwaters and several giant alligators. The screenplay by Michael and Shawn Rasmussen takes what is familiar, mundane and even sentimental (a family home, full of memo
Post a Comment
Read more
More posts