Showing posts from November, 2010
Show All 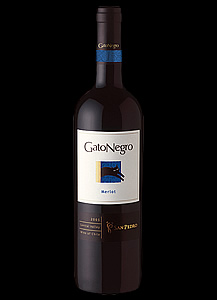 Another month, another recommendation of fine wine to guzzle whilst watching horror films. Whereas before, I'd always have a little 'wine of the month' piece on the sidebar of this here blog, that kind of fell by the wayside and I would generally forget to update it. OK, sometimes I’d over indulge and just forget to tell you about it, but rest assured I was always heavily ensconced in research… Hey, it’s important to know what wine will enhance your horror viewing pleasure. Certain wines go hand in hand with certain horror movies. This month’s batch of film reviews were lovingly brought to you in association with a 2008 vintage Gato Negro Merlot – a delicious, medium bodied wine from Chile. With a bright red ruby colour and an aroma swirling with ripe, red berry fruits, this bottle goes down rather nicely with something directed by Mario Bava. Or chicken or pasta. The flavour is quite juicy and reminiscent of jammy fruit in springtime. Gato Negro is apparently one
6 comments
Read more 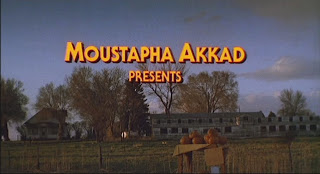 After his hiatus from the criminally underrated (though still far from perfect) Halloween III: Season of the Witch , Michael Myers, at the behest of his fans – and greedy producers – returned to stalk the leafy streets of Haddonfield in Halloween IV: The Return of Michael Myers . See what they did there. With a whole new set of characters introduced, including Laurie Strode’s daughter and her adoptive family, it isn’t long before the blood begins to flow. For a film bogged down in its own lack of imagination, originality or flair, Halloween IV actually begins with so much promise. The opening titles play out over a simple collection of shots which when viewed in succession evoke such a bleak, eerie and overwhelmingly creepy atmosphere. The lack of music adds to the unease – all that exists on the soundtrack is a low howling wind that reeks of desolation and despair. Before long, the faintest strains of Alan Howarth’s deliciously dark and brooding synth score can gradually be
9 comments
Read more 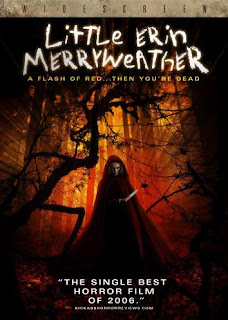 2003 Dir. David Morwick The grisly murders of several students at a quiet college campus tie in with recent sightings of a red-hooded figure creeping around the local woods. Student Peter Bloom decides to investigate, and before long realises that the killer, who has a connection to the school library, is also obsessed with fairy tales. Peter must act quickly to figure out the bizarre modus operandi and stop the killer before they strikes again… 'A flash of red... Then you're dead. ' I bought Little Erin Merryweather for £1 in a local discount shop. I wasn’t really expecting much; so was pleasantly surprised when it actually turned out to be not half bad. It certainly has its fair share of interesting moments and startling imagery. And it was £1. An intriguing opening sets the fairy tale-image drenched scene, as a young college student is lured into the woods by a mysterious figure in a red cape, only to be set upon and gutted. Even though we don’t see the act,
9 comments
Read more 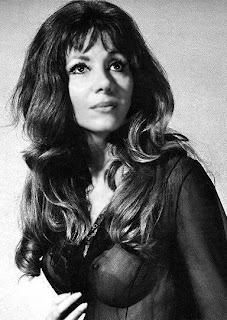 Actress and author Ingrid Pitt, best known for her roles in horror films from the 60s and 70s, such as the Hammer Horror productions The Vampire Lovers and Countess Dracula , has passed away at the age of 73. The Polish-born star died from heart failure at a hospital in south London where she was admitted after collapsing a few days ago. Pitt’s death comes just several weeks after that of Roy Ward Baker, who directed her in The Vampire Lovers .  Of all the bewitching, beguiling actresses whose presence graced various Hammer Horror productions throughout the years, Pitt is one of the most commanding – and even though she only appeared in two Hammer titles, was still certainly one of the most memorably compelling leading Hammer ladies. Indeed, according to Hammer historian Marcus Hearn, Pitt was a "talented actress and fine writer" who was also "partly responsible for ushering in a bold and brazen era of sexually explicitly horror films in the 1970s; but that should
1 comment
Read more 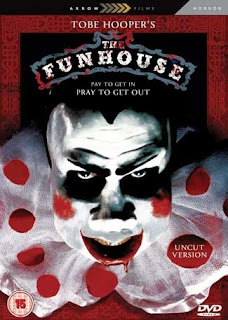 Dir. Tobe Hooper 1981 Disobeying her parent's orders, teenager Amy sneaks out to visit a sleazy travelling carnival with her friends Liz, Buzz and Richie. They decide to spend the night in the carnival funhouse, but after witnessing a gruesome murder, are stalked by the maniacal, deformed offspring of the carnival barker. Tobe Hooper’s masterpiece The Texas Chain Saw Massacre needs no introduction. One of the most highly regarded, visceral, provocative and controversial horror films of all time, few films have matched it for its raw intensity: not even many of Hooper’s own subsequent offerings could live up to the extreme intensity it generated. That said, much of his earlier work still retains an edgy grittiness to it; the sweaty bijou snuff-atmospherics of Eaten Alive and the nasty underbelly of Spielberg produced Poltergeist , all display intensity seemingly only Hooper could muster. Even in the creepy Prime-Time vampires-invading-a-small-town Stephen King TV adaptati
7 comments
Read more

Artist Matt Gondek has been designing neon googly-eyed monsters for bands, companies and clothing brands for five years now, and at 28, he is already co-owner of his own clothing brand ( Wonderful Life ). The artist’s striking designs recently caught the eye of horror mag Fangoria , who immediately commissioned him to design a brand-spanking-new line of T-shirts. I interviewed him about his work and love of monsters - check it out over at Fangoria .
Post a Comment
Read more

Those generous folks over at Arrow Video / Cult Labs are at it again. Having already released Inferno, The Card Player, Opera, The Stendhal Syndrome and Two Evil Eyes , they’ve just announced several more forthcoming Argento titles. Hot on the heels of The Bird with the Crystal Plumage, Phenomena and Deep Red will be Cat O’Nine Tails and Tenebrae , both to be released next year on DVD and Blu-Ray complete with a bloody geyser of extra features and newly commissioned art work by Rick Melton. His second feature (and his own least favourite of his films), Cat O’Nine Tails was Argento’s follow up to the dazzling The Bird with the Crystal Plumage . The film stars James Franciscus as a reporter who teams up with a blind ex-cop (Karl Malden) to track down a killer seemingly obsessed with mysterious genetic research. A slick and stylish giallo, Cat O’Nine Tails was the second film in Argento’s renowned ‘Animal Trilogy' and has its fair share of memorable moments and suspenseful
2 comments
Read more

A Serbian Film is set to hit UK cinemas, after an incredible storm of controversy, on 10th December, and is unleashed on DVD and Blu-ray on 3rd January 2011. Thanks to the lovely folks over at Cult Labs , Behind the Couch has an exclusive trailer of the movie... Scripted by Serbian horror film critic Aleksandar Radivojevic (screenwriter of the award winning Tears For Sale ), the debut feature from director Srdjan Spasojevic is an allegorical, taboo shattering film that “follows French cinema pioneers Gaspar Noe ( Irreversible ) and Virginie Despentes ( Baise-moi ) in destroying the status quo regarding on-screen violence and sexuality” (Tim Anderson, BloodyDisgusting.com). A twisted tale of an adult film star’s horrifying descent into an almost unimaginable hell, Radivojevic himself describes the film as “a diary of our molestation by the Serbian government… It’s about the monolithic power of leaders who hypnotize you to do things you don’t want to do.” Milos (Srdjan Todor
3 comments
Read more 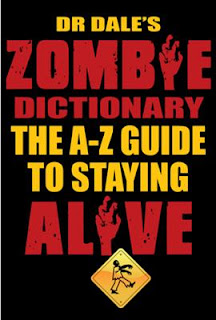 Those who attended Augusts’ Yellow Fever Independent Film Festival in Belfast’s Stormont Hotel – or indeed any of the sell out Edinburgh Fringe shows – will be aware of Zombology self-help guru Dr Dale Seslick’s Zombie Apocalypse Survival Seminars. Expert – and caring humanitarian – that he is, it was only a matter of time before Dr Seslick condensed all his knowledge about the living dead into one convenient source: Ladies and gentlemens I give you the lovingly crafted, downright indispensable Dr Dale’s Zombie Dictionary: The A-Z Guide to Staying Alive - your one stop shop in the event of a zombie apocalypse. As yet, the undead have not risen from their graves and stared to devour the living – but there was a time when we said man would never walk on the moon and look what happened there! We must prepare for the inevitable, and Dr Seslick’s Dictionary of the Dead is the ultimate alphabetical reference guide on how to survive when the zombies finally arrive and attempt to eat
2 comments
Read more

Those too-cool-for-school folks over at Cult Labs and Arrow Video have raised the bar yet again with the announcement of several forthcoming Argento titles next year. Kicking things off will be a beautifully designed and jam-packed two disc special edition of Argento’s undisputed giallo masterpiece, Deep Red , on Blu-ray and DVD in late November/early Dec 2010. As well as the exquisitely lurid new artwork that champions each release from Arrow Video, this special edition of Deep Red also contains a 2 sided fold-out poster, an exclusive collector’s booklet featuring brand new writing on Deep Red by Alan Jones, author of ‘Profondo Argento', a brand new transfer of the Director’s Cut in High Definition with an introduction by composer Claudio Simonetti. There are a number of brand spanking new featurettes too, such as Rosso Recollections – Dario’s Deep Genius, Lady in Red: Daria Nicolodi remembers Profondo Rosso and Music to Murder For! Claudio Simonetti on Deep Red . Ot
6 comments
Read more 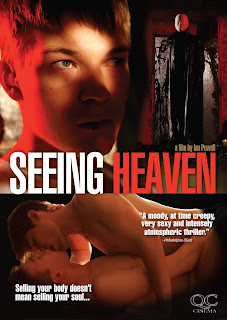 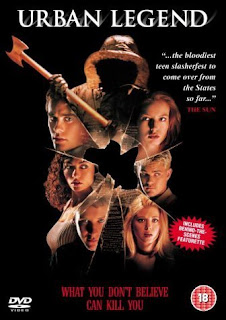 1998 Dir. Jamie Blanks After several deaths and disappearances of fellow students, Natalie (Alicia Witt) begins to suspect that a brutal psychopathic killer is offing the campus populace in grisly ways inspired by old urban legends. Trouble is, no one believes her. Teaming up with best friend Brenda (Rebecca Gayheart) and roving student reporter Paul (Jared Leto), she sets out to reveal who the killer is and stop them before its too late… but wait! Who’s that over there? Hello? Hello?? *wonders off alone to investigate a strange noise* An urban legend is a form of modern folklore, usually passed on by word of mouth and concerning an event believed by the teller to be true. They are stories that act as cautionary morality tales that vary over time, and usually carry some significance for the particular communities that propagate them. The premise of Urban Legend - that various students are being murdered in a manner that echoes various notorious urban legends/folktales - is on
11 comments
Read more
More posts