Showing posts from January, 2017
Show All

Lemora – A Child’s Tale of the Supernatural 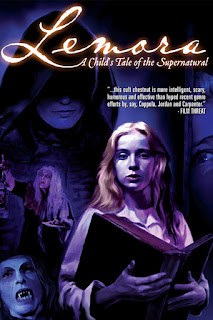 1973 Dir. Richard Blackburn Set in 1920s rural America and filmed on an ultra-low budget, this deliciously weird and wonderful adult fairy tale tells of a young girl’s sexual awakening in the rustic abode of a female vampire. When 13-year-old church singer Lila (Cheryl Smith) receives a letter from the titular antagonist (Lesley Gilb) informing the girl her gangster father is close to death and longs to see her one last time, Lila runs away from her puritanical guardian, Reverend Mueller (Blackburn). On her journey she encounters various incarnations of aggressive male sexuality, from the sleazy ticket seller at the bus station and the lecherous man whose car she stows away in, to the coven of undead abominations lurking in the woods around Lemora’s home. Their advances serve to highlight Lila’s perceived vulnerability and objectify her burgeoning sexuality as she wanders somnambulantly through increasingly nightmarish landscapes. When she arrives at the home of Lemora, Lila init
Post a Comment
Read more Happy 20th Birthday, Scream ! I can't believe you've grown up so fast. I know it’s now 2017 and you turned 20 last year, but you weren’t released in the UK until 1997 so technically it was twenty years ago this year that I saw you. Technicalities aside, I couldn’t let the occasion go by without writing a little something about you on here. I remember my dad taking me to see you at the cinema because you were rated 18 and I was only 16. I wanted so badly to see you though. I was shocked and intrigued by your teaser campaign on TV, and you starred some people who were in things I loved as a 16-year-old ( Friends ! Party of Five ! Boys on the Side !). You were my first experience of watching a horror film in a cinema with a real live cinema audience (they were quite annoying) and I can still remember the excitement and anticipation. I was equal parts irked and enthralled when the audience reacted to you in such a vocal way. They screamed a lot . I thought you were the greates
3 comments
Read more

Razors: The Return of Jack the Ripper 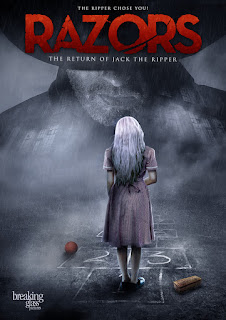 2016 Dirs. Ian Powell & Karl Ward What if someone had discovered the knives used by Jack the Ripper? What if those cruelly glinting blades then went missing? And what if the Ripper came back into our world to once again mutilate and massacre? These are the tantalising questions that form the premise of atmospheric independent horror Razors , the first in a new series of forthcoming films set to explore the bloody exploits of one of the world’s most mysterious serial killers. It tells of enigmatic film professor Robert Wise (Thomas Thoroe) who gathers a group of young screenwriters at a sinister Victorian warehouse in the heart of London to work on the ultimate horror film. Amongst the assembled group is troubled screenwriter Ruth (Kelby Keenan) who believes she has discovered the actual knives used by Jack the Ripper. When the knives go missing and it appears the spirit of the Ripper roams free, the young screenwriters must unlock the building’s dark secrets and unravel myste
1 comment
Read more
More posts