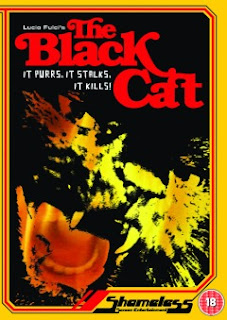 The arrival of American photographer Jill Trevers (Mimsy Farmer) at a sleepy English village coincides with a series of bizarre, seemingly accidental deaths. She teams up with Scotland Yard detective Gorley (David Warbeck), in town to investigate the spate of odd occurrences, and local copper Sgt. Wilson (Al Cliver), and begins to suspect the involvement of the reclusive Professor Miles (Patrick Magee) in the deaths. Turns out Miles has been frequenting the local cemetery in a bid to record and communicate with the dead. He also appears to have a psychic link with his black cat. Could it be that he is channelling his psychic abilities and manipulating his cat to prowl after and murder those who have wronged him? No! Surely not!

Opening with much prowling camera work, a gruesome car crash in which the driver is distracted by the eponymous kitty, crashes into a wall and is impaled on his own decimated windscreen before being engulfed by flames from the exploding car, Fulci’s ‘freely adapted’ take on Poe’s 'The Black Cat' begins with twisted promise. From here we’re treated to all manner of low level, skulking camera work, ideas involving necromancy, communing with the dead, hypnotism, mysterious (ludicrous!) deaths and more zooms into close-up shots of fear-widened eyes than you can shake a blood-stained claw at. What soon becomes apparent is that all of this has actually fuck all to do with Poe’s original tale (aside from the foreseeable conclusion involving someone being walled up with the titular critter) and becomes more unclear as to what is going on as events progress.

What is lifted wholesale from Poe’s tale however, and is fairly typical of Fulci’s best work, is the unshakable atmosphere of dread and anxiety that feels as heavy as the fog enshrouding the village. A number of scenes are shot through with a macabre beauty thanks to moody cinematography courtesy of Sergio Salvati, particularly the scene in which Miles treks through the cemetery at night with his cat in a bag and the almost dream-like moment when Jill, out photographing local countryside, discovers an open crypt in a field and descends into its cobwebby, skeleton-strewn depths. The shots of the foggy village at night echo similar moments from the likes of City of the Living Dead, and Mario Bava’s Baron Blood, and are eerily beautiful. Fulci imbues proceedings with so much Gothic atmosphere, at times the film feels like it could have been produced by the likes of Hammer or Amicus; it certainly exhibits the same off-the-wall, oddness of those studios’ contemporary, Home Counties based Gothic chillers; though it is much more violent and sadistic than anything they ever produced.

While it is certainly more toned down than some of his other works, The Black Cat is not lacking its fair share of gruesome death sequences that boast all the gastro-churning viscera and frustration associated with the director’s depictions of violent demises. Amongst the unfortunates bumped of here, either by kitteh, or via other mysterious/silly/preposterous means, are a woman set on fire in her bed, a cavorting couple locked in a boathouse who suffocate to death, the town drunk impaled on farm equipment when he’s stalked through the town by the cat (which at one stage opens a door!), and the poor fool who crashes his car so gruesomely at the beginning of the film. As with most of Fulci’s death scenes, these are ridiculous and fairly overblown, yet still pack quite a punch. He seems to have such contempt for his characters; they are usually pathetic creatures who lack any sort of characterisation or depth. He just moves them, pawn-like, around his surreal narratives before bumping them off. This lot are no less weak and feeble than other Fulci characters; too petrified to move or fight for their lives. The resignation to their ghastly fates enhances the disturbing tone of the story and a smattering of close-ups of eyes widening in terror and disbelief as characters gawp at their advancing deaths, appear throughout. Infuriating and yet utterly unsettling. 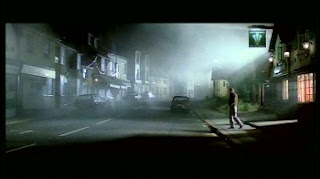 Amidst uneven acting, weird accents, bad dubbing and even worse hairstyles, Patrick Magee does his best twitchy, eyebrow acting, while Mimsy Farmer, David Warbeck and Al Cliver look suitably bewildered as they attempt to piece together a fairly nonsensical mystery involving, well, I don’t know to be honest! It is never made clear why or how Miles controls the cat, or why or how it also has a bizarre hold over him. Proceedings are accompanied by a darkly mischievous score courtesy of Pino Donaggio and the ferocious cat attacks are well handled – all close ups of gnashing teeth, flashing claws, running blood and gashed flesh. Again, like much of Fulci’s best work, The Black Cat is doomful in tone, deathly serious, unevenly paced and at times utterly boring and incomprehensible. To his credit though, and incomprehensibility aside, Fulci manages to keep things reasonably taut and the whole thing is so atmospheric, beautifully filmed, creepy and entertaining (intentionally or otherwise), you might not care about luxuries such as coherence or plot.
Here kitteh, kitteh.

Shaun Anderson [The Celluloid Highway] said…
Great review James! - Horror fans seem to forget that this dreadful waste of celluloid was produced in between CITY OF THE LIVING DEAD and THE BEYOND. It tends to get airbrushed out by those determined to elevate Fulci's status. Apart from the prowling camera that you noted the only thing I liked about this was Pino Donaggio's music - the opening theme is superb.
13 January 2011 at 15:45

James Gracey said…
I really liked elements of it, such as the camera work, score and general feeling of gothic doom. Like so much of Fulci's output though, I also found it incredibly frustrating, shoddy in places and downright plodding. It was only when I sat down to write this review that I realised how strong my feelings about his work are. There'll be a rant posted over the weekend to be sure... ;)
14 January 2011 at 01:23

Giovanni Susina said…
I think it really takes an appreciation for Fulci’s greater efforts first in order to find enjoyment from this one. I really felt at home with all of the familiar faces, and that atmosphere that is undoubtedly Fulci. Plus Dagmar Lassander’s presence makes it that much more pleasant.
14 January 2011 at 17:13

Ian Powell said…
I rather liked the incidentals here. The use of widescreen, Mcgee and the fact that it was less gore drenched than some of his others, although in their way Beyond and Cemetery are better films. There is something bewitching about his style when he is doing gothic. I would love to make a gothic but how can you make them commercial now
16 January 2011 at 23:16

I Like Horror Movies said…
Ive given this one two goes, and I just cant get into it. Mediocre at best, with only a few highlights.
23 January 2011 at 20:02

Unknown said…
Fab review James. One thing I have to give Fulci is that even with some of his weaker films, his visual sense with certain shots still wow me. The man had a great instinct for what worked in that arena, as your great scans attest to.
24 January 2011 at 06:23

Franco Macabro said…
I like atmospheric horror films, I'll give this one a chance, its one of the few Fulci films I've yet to see.

He did another cat themed film, A Cat In The Brain, but I dont recommend it. It was a film that was made up largely of clips from other films from other Italian horror directors.
24 January 2011 at 18:09