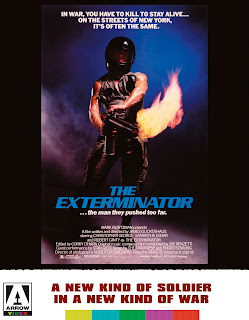 After returning home to the US from fighting in Vietnam, a traumatised soldier attempting to rebuild his life turns vigilante when his best friend is paralysed by a group of thugs.

While it may unfold as a brazenly violent, exploitative and at times trashy revenge fantasy, Glickenhaus’s The Exterminator is also at times a strangely thoughtful commentary on the difficulties of ex-military reintegration, post-war trauma and government corruption. The socio-political subtext about the plight of Vietnam vets and how their own society and justice system failed them on their return home, isn’t just a front for the exploitative violence – the film does make some genuinely stark points – some of which, particularly those about the ordinary working man’s dissatisfaction with greedy, corrupt governments who make us pay for their mistakes – have never been more prevalent. John Eastland (Robert Ginty), like so many other soldiers, fought because they felt they were protecting the ideals of democracy and for the safety of future generations. Upon his return to New York he finds a city overrun by corruption, vice and crime – a society devouring itself through greed and debauchery.

While Glickenhaus’s script never seems to overly condone Eastland’s violent actions, it never really condemns him either. Aside from the overly elaborate methods of death he employs (dropping a gang boss into a mincing machine; tying up a couple of gang members in a basement for rats to chew their faces off) Eastland is never really presented as an unreasonable madman – if anything, he’s presented as a thoughtful intellectual kinda guy (a copy of Sartre’s 'Critique of Dialectical Reason' can be spied on his coffee table) who just wants to get on with living his life in peace. In fact it is actually his humanity and his loyalty to his paralysed friend Michael (Steve James) that eventually gives him away. The film’s closing line “Washington will be pleased”, is unsettlingly sinister, and screams of political corruption and desperation. 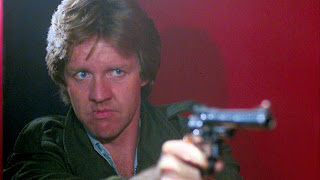 It isn’t all doom and gloom though – The Exterminator is a good old fashioned vigilante justice flick with an ‘everyman pushed to the edge’ as its protagonist. The likes of Street Trash and Hobo With A Shotgun would riff on similar themes later on; with their depictions of ordinary decent people neglected and pushed to extremes by the corrupt nature of society - or, more specifically, those who govern society. That Eastland vents his anger and vigilantism on such lowlifes as child pornographers, rapists, paedophiles, pimps and various other underworld denizens adds to the ‘right on’ sense of trashy entertainment the story emits. For a film with such bleak events depicted in it, The Exterminator still has moments of warmth that lend it some heart – especially the burgeoning romance between Detective James Dalton and Dr. Megan Stewart (Christopher George and Samantha Eggar), and Eastland’s friendship with Michael and the support he gives his friend’s family.

From the denim-flaunting, headband-wearing thugs (The Ghetto Ghouls) complete with chains, spiked accessories and bad attitudes, to the sleazy squalid atmosphere of a New York that could only have been filmed in the Eighties – seediness brimming with rat-infested menace – The Exterminator oozes atmosphere. An irresistible Abel Ferraraesque New York City provides the backdrop for the story; all sleazy neon, grimy sidewalks and steamy back alleys, while the film’s opening – a red lit and hellish Vietnam ‘trench’ featuring a gruesome decapitation that still looks pretty effective and disturbing to this day – and explosions galore, is all beautifully rendered in HD. 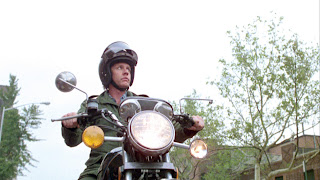 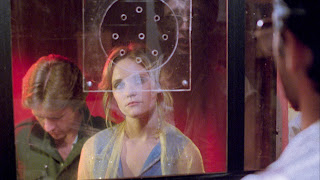 teddy crescendo said…
Hey James, the only reason that "so-called" child pornographers, rapists, pedophiles, and pimps are regarded as "lowlifes" is because we`re all still unfortunate enough to be living in "THE TIME OF SEXUAL REPRESSION", a time that will always be remembered by future historians as being one of the most loathsome and horrifying periods of history to have had to live through, and we`re the poor bastards who had to live through it, and you wonder why i`m so bitter ! ? ! ?.
5 November 2011 at 16:03

James Gracey said…
Interesting. Though I'm not sure what you're getting at, Teddy.
The film is very black and white in its presentation of 'bad' and 'good' - while it is at times quite thoughtful - The Exterminator isn't THAT thoughtful. Its an exploitation movie from the Eighties. As such its 'villains' are painted with the broadest strokes possible and without subtle nuance to ensure we side with the hero (well, anti-hero really).
5 November 2011 at 17:00

Dr. Charles Forbin said…
Saw this in 1980 in a seedy 42nd street theater. The scene where he shoots a guy with a 44 magnum, and we see the shot thug sailing over a car in slow motion in the background, got an applause line from the audience.

Basically this is Toxic Avenger for the 1980s. Good trashy fun.

For an adult treatment of some of the same themes, with LOTS of nuance (the protagonist is clearly insane, and generally people missed that the "ending" is his death dream) see Scorsese's Taxi Driver.
5 November 2011 at 19:06

James Gracey said…
I would have loved to have seen stuff like this when it was first released! It must have been quite the experience.

Good point about Taxi Driver, too.

Speaking of seedy old cinemas and such - I read an interesting review with William Lustig this morning - he was discussing the forthcoming remake of Maniac and how it would actually be possible, given the recession and economic hardship of recent times, to recreate the grimy seediness of 80s NYC today. Check it out here: http://www.fangoria.com/index.php?option=com_content&view=article&id=5977:woah-elijah-wood-warns-you-not-to-go-out-tonight-in-qmaniacq-remake&catid=1:latest-news&Itemid=167

Shaun Anderson [The Celluloid Highway] said…
I think THE EXTERMINATOR is a great little film, I'm looking forward to Arrow's Blu-ray of this one. I'm a big fan of vigilante movies in general - a really superb recent example is HARRY BROWN. What is Teddy Crescendo's major malfunction? I see you get some asylum escapees on your site as well James!
6 November 2011 at 22:38

James Gracey said…
Thanks for the recommendation, Shaun! I like a good vigilante movie every now and again too. Alas, I think one of the more recent ones I watched was Death Sentence with Kevin Bacon. It wasn't great - but I think I can watch anything with Kevin Bacon in it. Even Apollo 13...

Aaron is having a 'hairy macho bullshit' month over at The Death Rattle - he's been reviewing a few vigilante flicks and eurocrime movies.

I have to say, Teddy aside, I really don't get that many kerr-azy comments. Except someone once said that Phantom of the Opera WASN'T Argento's worst film! ;)
7 November 2011 at 02:02

jervaise brooke hamster said…
James, Teddy Crescendo simply tells "the truth" rather than being a liar and hypocrite like everyone else, thats why hes so unpopular and is often dismissed as "a looney" because the vast majority of people unfortunately still prefer lies and hypocrisy over "the truth", but then again of course thats just another loathsome product of the hideously sexually repressed hell-on-earth that we`ve unfortunately created for ourselves. All the pain, misery, suffering, anguish, and despair in the world is directly derived from sexual repression, never forget that my old mate, never.
19 November 2011 at 17:40