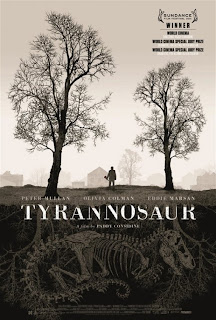 After killing his dog in a fit of rage, violent alcoholic Joseph heads toward psychotic meltdown. Stifled by his past and his own anger with the world, Joseph thinks he finds redemption in the form of local charity shop worker Hannah. However Hannah has a dark secret of her own which threatens to shatter both their lives and plunge Joseph deeper into deadly despair.

In Steven Spielberg’s Jurassic Park there’s a famous moment when the audience and characters are alerted to the oncoming danger of an approaching T-Rex by water rippling in a paper cup. Paddy Considine’s assured and commanding feature directorial debut doesn’t have man-eating monsters in it, but it does feature a one-man rampage against life and the same sense of impending doom and menace ripples throughout it.

Considine is an actor who made a name for himself with his intense performances under the direction of Shane Meadows. Appearing in films such as Dead Man’s Shoes (which he co-wrote) and A Room For Romeo Brass, Considine soon secured a reputation for playing dark ‘n’ disturbed characters, the likes of which would easily be at home in his directorial debut. From Tyrannosaur’s opening scene in which the protagonist, walking time bomb of internalised rage Joseph (Peter Mullan – Session 9), explodes violently and kicks his dog to death, all the way to the shattering denouement, Tyrannosaur pulls no punches and unfolds as a gritty, at times bleak and unrelenting slice of life. A ‘kitchen-sink horror’, if you will. 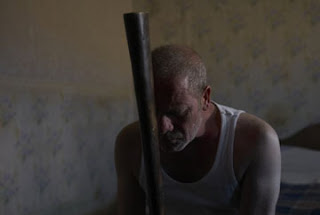 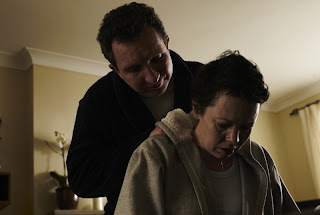 Considine’s direction is unobtrusive and unfussy, and he allows his characters to just live and interact and for the story to tell itself. The director exhibits an astute knack for revealing horror in the everyday, the mundane and the ordinary, as his broken, damaged characters that have had the shit kicked out of them by life, lead fractured and lonely existences on a seemingly unstoppable collision course with tragedy. But there is also heartbreaking beauty in the breakdown; a little boy’s drawing left at Joseph’s doorstep, a dying dog’s fragile glance and the bond that materialises between Joseph and Hannah. Testament to Considine’s skill as a writer and Mullan’s powerful performance, we feel nothing but pity and sympathy for Joseph, despite the atrocious things he does. Rampaging around his council estate snapping and snarling his way to personal extinction, a few violent outbursts reveal what Joseph is really capable of. But we also see him in his quieter moments, despairing at the world and with himself.

Desperately seeking redemption, this domestic monster whose brutality and anger has completely ostracised him, encounters hope in the form of Christian charity worker Hannah (Olivia Colman). A chance meeting initiates a tentative friendship, but as time goes on, Joseph realises that his assumption that everyone ‘has their own shit to deal with’, is true and Hannah has a few demons of her own to face in the form of her abusive and chillingly sadistic husband. As the quietly despairing Hannah, Colman, renowned for comedic roles in the likes of Peep Show and Hot Fuzz, delivers a powerfully compelling and utterly jaw-dropping performance. In some of the later scenes she’s barely recognisable; her face a swollen and bruised mess.

An immensely powerful film that showcases the talents of all involved, and while much of it will knock the wind out of your sails, it will also let you believe that maybe, just maybe, everything will be okay in the end.
British Film Domestic Horror Drama Existential Horror Indie Film Kitchen-sink Horror Paddy Considine Social Commentary

Will Errickson said…
This sounds incredible! "Kitchen-sink horror," I love it. And that poster is nothing short of glorious, one of the finest movie posters in ages.
4 November 2011 at 01:28

James Gracey said…
Yeah Will, as soon as I heard who was involved with the film, I knew it would be worth checking out. The performances in this are astoundingly good. It is tough-going though!

And the poster is a beautiful thing indeed. It just depicts the themes of the film so perfectly and succinctly.
4 November 2011 at 09:25

Christine Hadden said…
This really sounds like a 'must-see'- but wow, I don't think I could watch a guy kick his dog to death and sit through the rest of the film without extreme grief and anger towards the character.
Not sure I'm that strong.

James Gracey said…
That's the weird thing, Christine - despite the atrocious things Joseph does, Mullan's performance ensures we gradually come to take pity on the character. He so desperately wants to change and unshackle himself from his past. This is why it can so often be tough viewing - but so worth it.
4 November 2011 at 14:34