Anyone familiar with the irresistibly beautiful, yet devastatingly violent Italian giallo films of the Seventies – made popular by Mario Bava, Dario Argento and Sergio Martino – will no doubt have wept tears of joy while watching Hélène Cattet and Bruno Forzani’s breathlessly sensual Amer. Many of the now iconic motifs, visual codes and stylistic traits from the blood drenched and vivid archives of the giallo film were present and correct throughout Amer; a virtually dialogue free film revolving around concepts of obsession, sexual desire, psychological trauma and murder…

Following on from their contribution to The ABCs of Death - O is for Orgasm – the duo are currently making their sophomore feature, tantalisingly titled The Strange Colour Of Your Body's Tears (L'Etrange Couleur Des Larmes De Ton Corps). They have released a teasing synopsis, describing the film thus: The Strange Colour is the story of a man who investigates the weird conditions of his wife's disappearance. It's a film which we (Hélène & Bruno) have worked on for nine years now. It is set in Brussels (where we live) which is particularly known for its Art Nouveau architecture. The film is still produced by the same producers as Amer - Eve Commenge and François Cognard - and the Flemish director / producer Koen Mortier (Ex-Drummer). Several images have also surfaced on the internetz and I couldn’t resist sharing them here… They exude the same amalgamation of sensuality and threatening violence the duo’s previous feature, and indeed their short films, were saturated with. 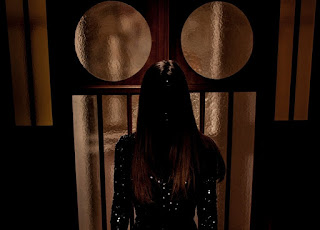 When I interviewed them in 2010, Hélène and Bruno said this when I asked them what they had planned after Amer…

Bruno: We want to make a giallo set in Brussels, the male version of Amer.
Hélène: But this time we want to explore the detective aspects of gialli!

It’s now clear they were talking about The Strange Colour Of Your Body's Tears. It should be interesting to see how the duo tackle a more plot driven narrative, or, dare I say it, a giallo in the traditional sense of the term. If indeed, that's what this film is. Recently the spirit of the giallo has materialised in quite a few striking films such as Peter Strickland's Berberian Sound Studio, Guillem Morales’ Julia’s Eyes and Ryan Haysom’s short, Yellow, to name but a few. Indeed, Federico Zampaglione made a contemporary giallo - the mesmerising Tulpa - complete with convoluted, badly dubbed dialogue and ludicrous plot twists! I for one shall wait with baited breath to see what The Strange Colour Of Your Body's Tears has to offer. Join me?
Amer European Film Hélène Cattet and Bruno Forzani Italian Horror Homage Neo Giallo Sex and Death The Strange Colour Of Your Body's Tears