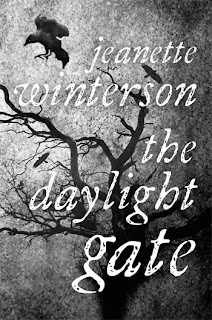 Based on the most notorious of English witch-trials, Jeanette Winterson’s latest book, The Daylight Gate, is a tale of magic, superstition, conscience and ruthless murder. It is set in a time when politics and religion were closely intertwined; when, following the Gunpowder Plot of 1605, every Catholic conspirator fled to a wild and untamed place far from the reach of London law.

This is Lancashire. This is Pendle. This is witch country.

Lurking in deepest, darkest north England, Pendle is a place brimming with bleak moors and dark forests. The events of 1612 are now an established part of English folklore and Pendle is still synonymous with witchcraft and diabolism to this day. Winterson tells of the plight of a group of Pendle women accused of witchcraft and cavorting with the Dark Lord, and the tortures and atrocities they endured at the hands of the law before they were put to death. Reality swirls with augmented fancy. Are these women real witches or merely social outcasts meddling in superstitious rites, pointing an accusing finger at the brutality of the patriarchy oppressing them? Whatever the facts, Winterson generates sympathy for them, quietly exposing their struggles in a world which rejects them from the outset.

The North is the dark place. It is not safe to be buried on the north side of the church and the North Door is the way of the Dead. The north of England is untamed. It can be subdued but it cannot be tamed. Lancashire is the wild part of the untamed. The Forest of Pendle used to be a hunting ground, but some say that the hill is the hunter - alive in its black-and-green coat cropped like an animal pelt.

Those who are born here are branded by Pendle. They share a common mark. There is still a tradition, or a superstition, that a girl-child born in Pendle Forest should be twice baptised; once in church and once in a black pool at the foot of the hill. The hill will know her then. She will be its trophy and its sacrifice. She must make her peace with her birthright, whatever that means.

The coven meets in a remote tower and plans to rescue their grand-beldame, Old Demdike, who is awaiting trial in Lancaster prison, suspected of occultish crimes. Blood rituals are interrupted when the authorities come to arrest them. Implicated in proceedings is the owner of the tower where the hags congregate, noble widow Alice Nutter. A self-made woman whose wealth and social-standing stem from her creation of a striking magenta dye favoured by Queen Elizabeth, Alice is typical of Winterson’s heroines; she's fiercely independent, mysterious, pan-sexual and a little other-worldly. This all plays out during the stifling and paranoid reign of King James I, who, having narrowly escaped an attempt on his life the previous decade when a group of English Catholics conspired to blow him up with gunpowder, became obsessed with heresy, treason and diabolism. His rancid tome Daemonologie essentially advocated witch hunting, and was doggedly adhered to by feverishly ambitious, opportunistic and downright sadistic authorities carrying out the King’s bidding. It was a dark and dangerous time; anyone seen as ‘different’ was at risk of being accused of witchcraft by fearful, ignorant and superstitious neighbours. 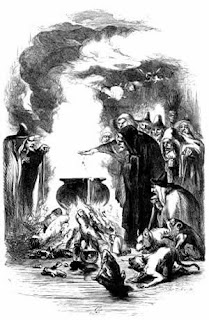 Commissioned by Hammer to write a horror story (the back cover promises it will soon be a ‘major Hammer film’), Winterson has created something darkly sensual, troubling, rooted in fact, while still remaining true to her own concerns and retaining her distinct voice. Typical of the author’s other work, The Daylight Gate features strong female characters - good and evil - lesbianism, feminism and doomed lovers existing on the periphery of society. It addresses the same ideas of class/gender injustice which stalk through some of Hammer’s best titles. Somewhat uncharacteristic of her earlier works however, this has a linear narrative, though it still retains the aspects of magic-realism her readers are familiar with; here presented in much darker form, such as talking severed heads, teeth raining from the sky and exchanges of souls with the devil. While we may already know the sickening fate of Alice Nutter et al, Winterson is still able to grip the reader in a bony claw and compel us further into the dank depths of the increasingly taut story. As one critic so succinctly described, the author’s telling of the tale has all the ‘grisly freshness of a newly exhumed graveyard corpse.’ Revelations and plot twists abound without ever feeling salacious or disingenuous. Historical wretches come alive around simmering, stinking cauldrons, and spilt blood flows through their interactions with authority figures entrenched in the trials; not least Thomas "Popery witchery, witchery popery" Potts, a clerk for the prosecution and the crown, whose detailed account of the trials The Wonderfull Discoverie of Witches in the Countie of Lancaster is infamous as one of the first and most detailed accounts of a witch trial. 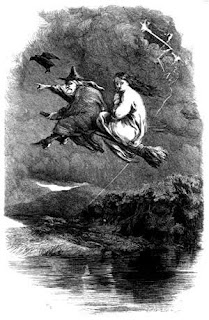 Hammer horror fans won’t be disappointed; indeed, admirers of more contemporary horror fare and all its livid extremities should find much to ‘delight’ them. The violence inflicted upon the wretched bodies of the women accused of fornicating with The Dark Gentleman is of the wincing, eye-watering variety. It doesn’t stem from the fantastic, but from reality. The most unsettling and brutal moments are the depictions of early 17th-century England in all its flea-ridden, pestilent saturated squalor, poverty, inequality and corruption. The subjugation of women and Catholics by a fanatical tyrant King, and the injustices inflicted upon the most needy factions of society, form the dark heart of the story. When they aren’t being flayed or castrated, the accused are left to rot in a hellish dungeon, nibbled on by rats skulking in the perpetual murkiness, while the damp straw the hags lay upon comes alive with crawling lice. This is all of course vividly wrought by Winterson’s effective, ever understated prose. Her simple but evocative use of language conjures an atmosphere heavily pregnant with foreboding and dread - the short, matter of fact sentences spurring the reader on to darker depths. The horror stems from the aberrant things humans do to other humans, and a biting social commentary pulsates throughout. Winterson’s research and understanding of the history surrounding the Pendle Witch trials further entrenches proceedings in a grim, rayless reality.

Drew Grimm Van Ess said…
As soon as I'm finshed N0S4A2 I'll be doing this. It sounds great! Thank you for he excellen write-up!

Really digging your page here, and I just followed you!

If you wanna chat horror films, swing by my blog.