An Appointment with Dr Caligari 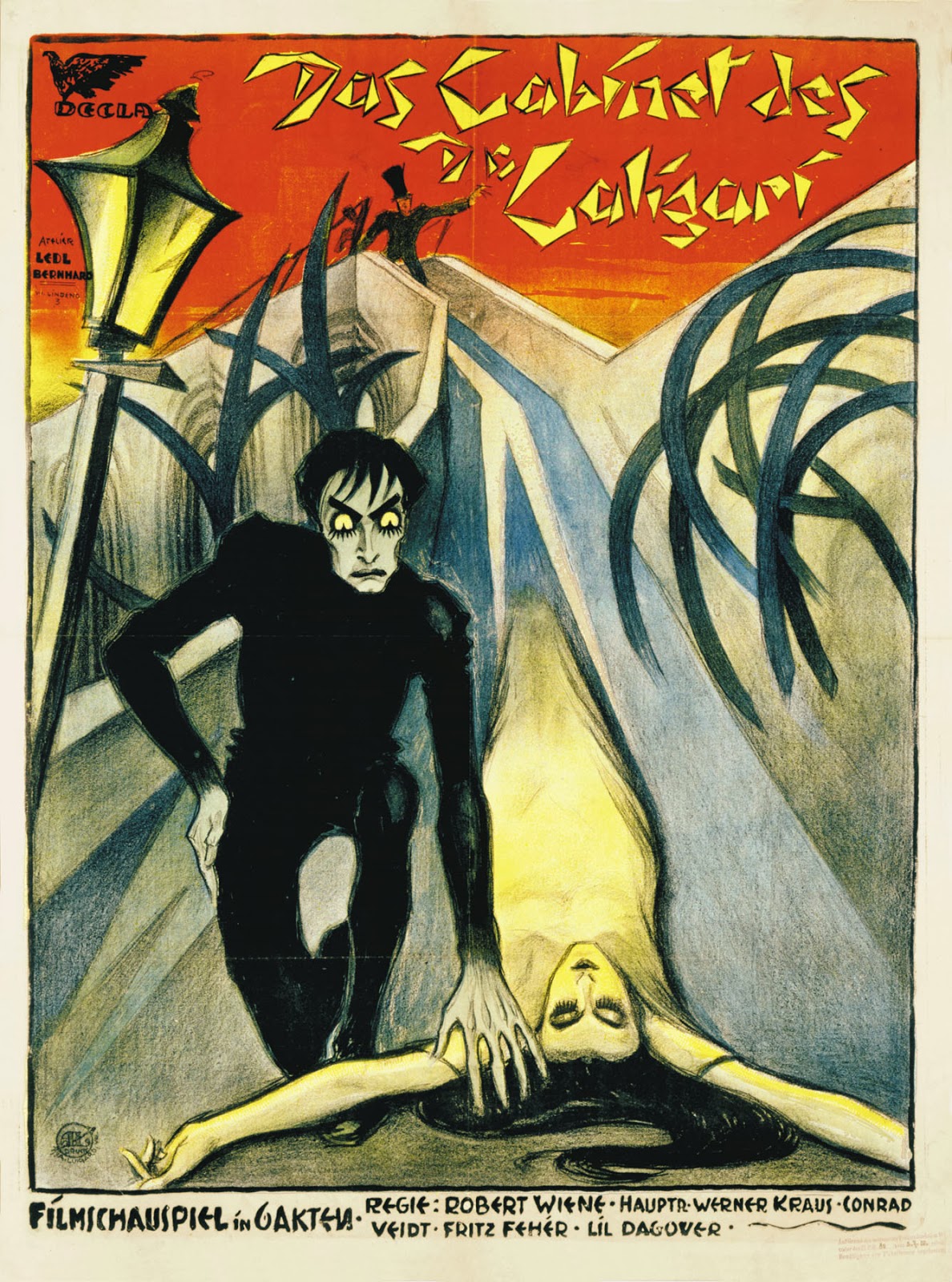 Last night saw Belfast’s The Crescent Arts Centre play host to a very special screening of the classic German horror title, The Cabinet of Dr. Caligari, complete with a live score courtesy of Dublin based instrumental ensemble, 3epkano. Formed in 2004 by Matthew Nolan and Cameron Doyle, 3epkano, pronounced three-ep-can-oh, which derives from Andrei Tarkovsky's film Зеркало (The Mirror), specialise in composing and performing contemporary soundtracks for classic films from the silent era of cinema.

Spirits surround us on every side... they have driven me from hearth and home, from wife and child.

Made in 1920, The Cabinet of Dr Caligari was written by Hans Janowitz and Carl Mayer. Now considered one of the most influential films of the German Expressionist movement, and indeed of horror cinema, it tells of the sinister Caligari, a mad carnival performer who uses a cadaverous somnambulist to carry out his nefarious deeds, including manipulation, murder and kidnap… Oh my! Beginning with a framing story, in which a young man recounts the macabre tale of Caligari, the film immediately establishes its fragmentary narrative which increasingly reveals that all is not what it seems. Proceedings unfurl amidst a suitably dream-like atmosphere, which becomes ever nightmarish as Caligari’s sleepwalker commits morbid crimes for his master.

One of the first cinematographic representations of an altered, fracturing mental state, Caligari is arguably the first psychological horror film. The Expressionistic use of lighting and production design – all jagged lines, skewed angles, distorted perspective and misshapen objects – suggests the unhinged psychology of the narrator, revealed at the denouement to be utterly insane. Shadows and light were actually painted onto the sets, and the actors wore exaggerated make-up and used distorted movements to add to the off-kilter, delirious atmosphere. With Caligari, Wiene and co not only gave cinema its first ‘twist ending’ but they also created a landscape radically different from anything seen before. Usurping the melodramatic realism favoured at the time, they subverted the cinematic norm of presenting the audience with something relatable and realistic. Caligari not only gave credence to the debate that cinema was a legitimate art form, but it also unveiled cinema’s potential as a doorway into the utterly fantastical, the unimaginable, and the impossible. 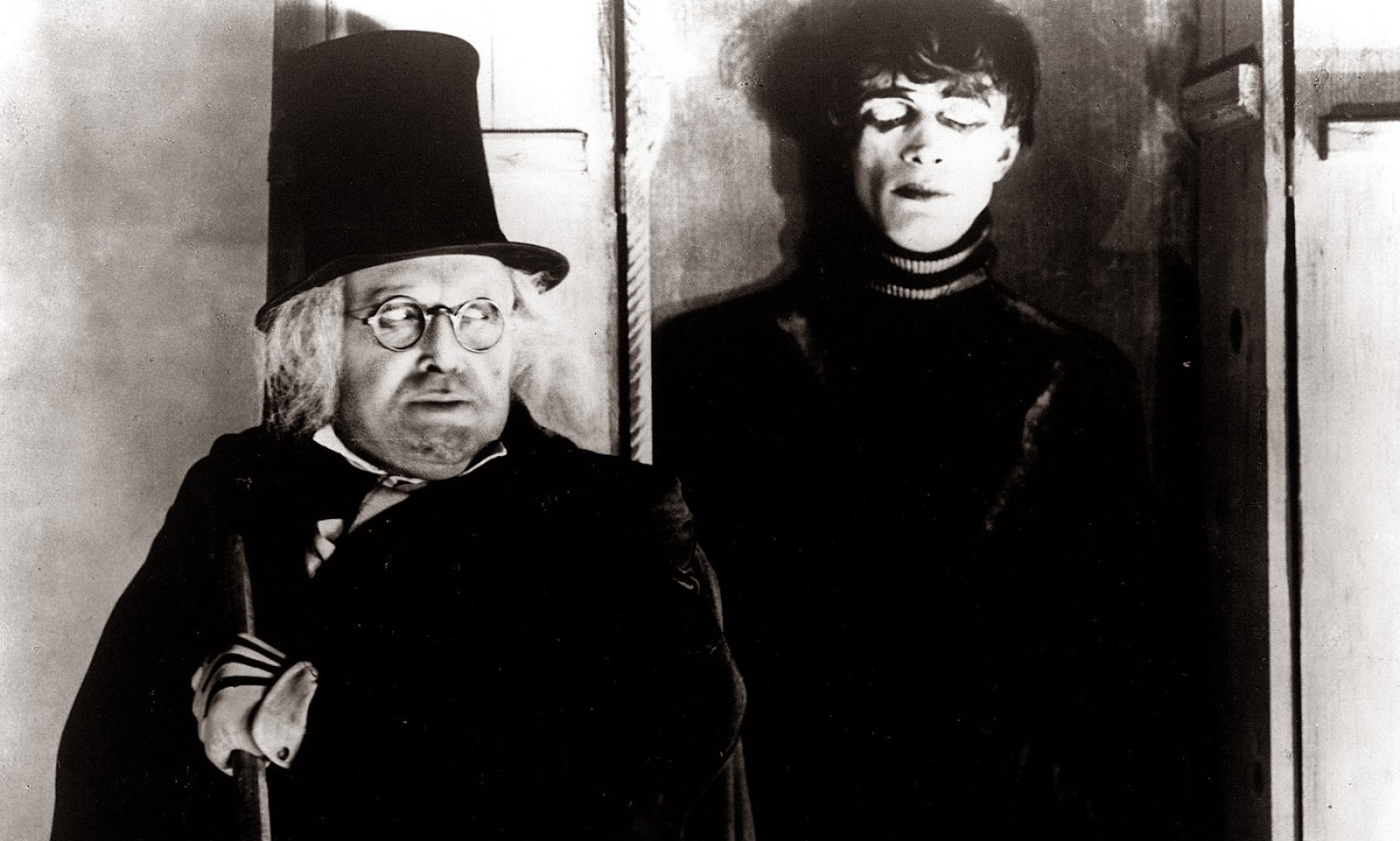 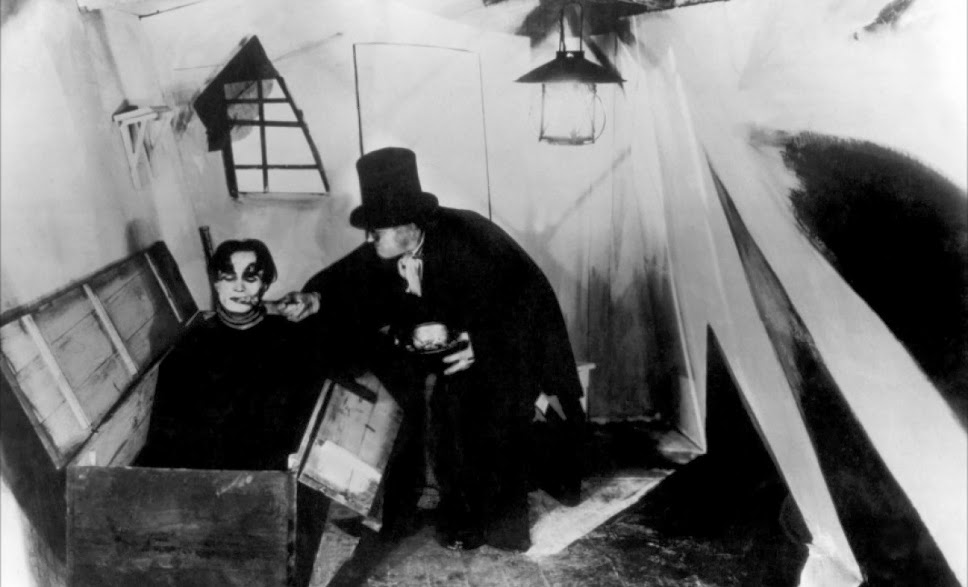 Production designer Hermann Warm, and painters Walter Reimann and Walter Röhrig, were primarily responsible for the film’s striking look. Producer Erich Pommer had actually approached Fritz Lang to direct, but as he was unavailable, the reins were handed to Robert Wiene. The art crew were given free reign as Pommer was so impressed with their ideas for the retina searing visual aspects. He had only one stipulation though, and that was that the whole lurid story should be revealed to be the product of an insane man’s ramblings; he felt it was less macabre than Caligari and Cesare actually carrying out such devastating deeds. 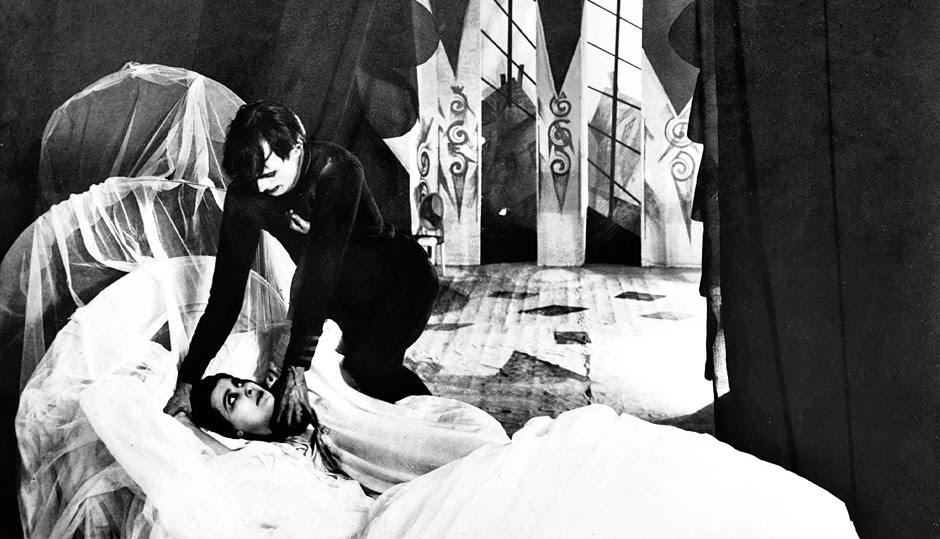 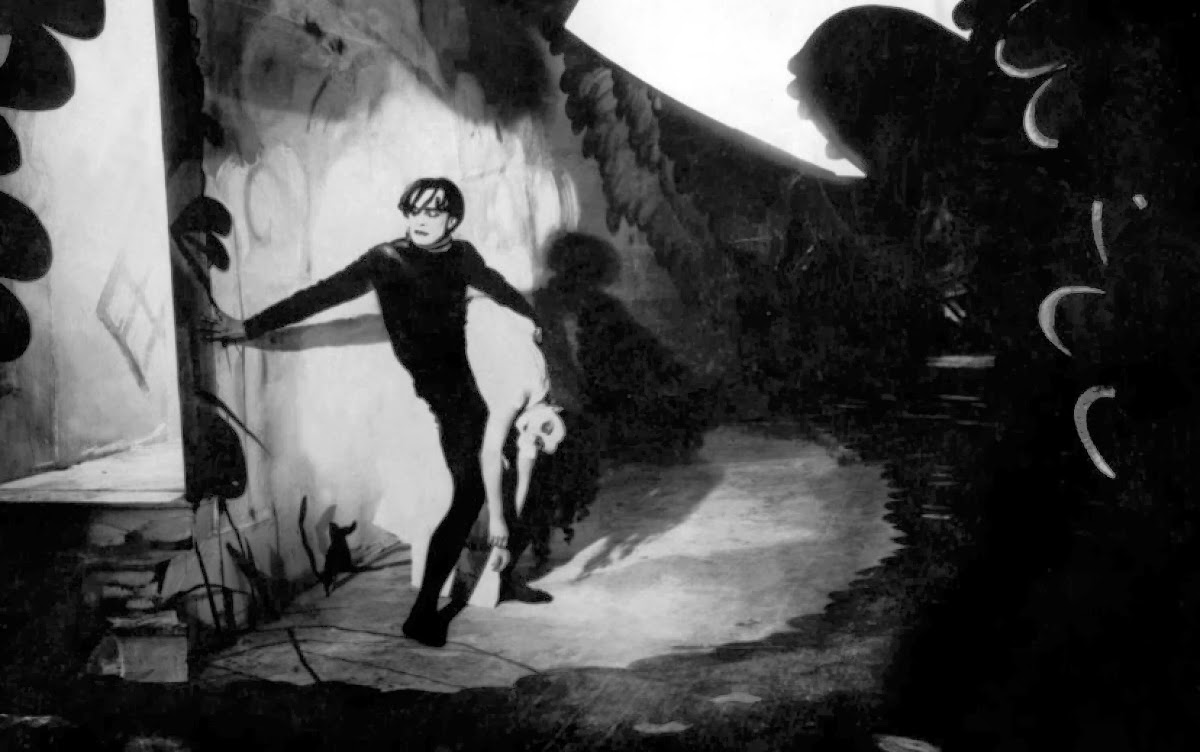 We have found the sleep-walker out in the fields.

Caligari is rife with unforgettable imagery, not least the appearance of the gaunt and haunted looking somnambulist, Cesare (Conrad Veidt). The sight of him slinking down a darkened street, shadow-like, and in through a window to terrorise the sleeping Jane, is the stuff of nightmares. Cesare may be an unsettling presence, but he is also a pitiable monster, who speaks of repressed desires and deadly longing. Film theorist Siegfried Kracauer considered Caligari to be a foreshadowing of the then impending Nazi regime and rise of fascism in Germany. He viewed the titular doctor as a menacing figure with not only a disturbed mindset, but, more dangerously than that, a commanding presence with which he was able to manipulate the population at will…

The music by 3epkano was suitably evocative and effortlessly enhanced the haunting visuals of this nightmarish horror classic. Reminiscent of the likes of Mogwai and Godspeed You! Black Emperor, their brand of post-rock, neo-classical experimentation is a richly melodic affair. Moody cello, spangly guitars and rousing percussion swirled together with snatches of creepy vocal work to suggest the disorientating haziness that comes, as Arcade Fire so eloquently put it in No Cars Go, ‘between the click of the light and the start of the dream.’ Atmospheric, melancholy and often spine-tingling, their compositions seemed to float out of the narrative itself, it so encapsulated the dream-like qualities of the story. A particularly affecting moment came with the swelling cacophony that accompanied the scene where Cesare slowly opens his eyes for the first time. Chilling stuff. 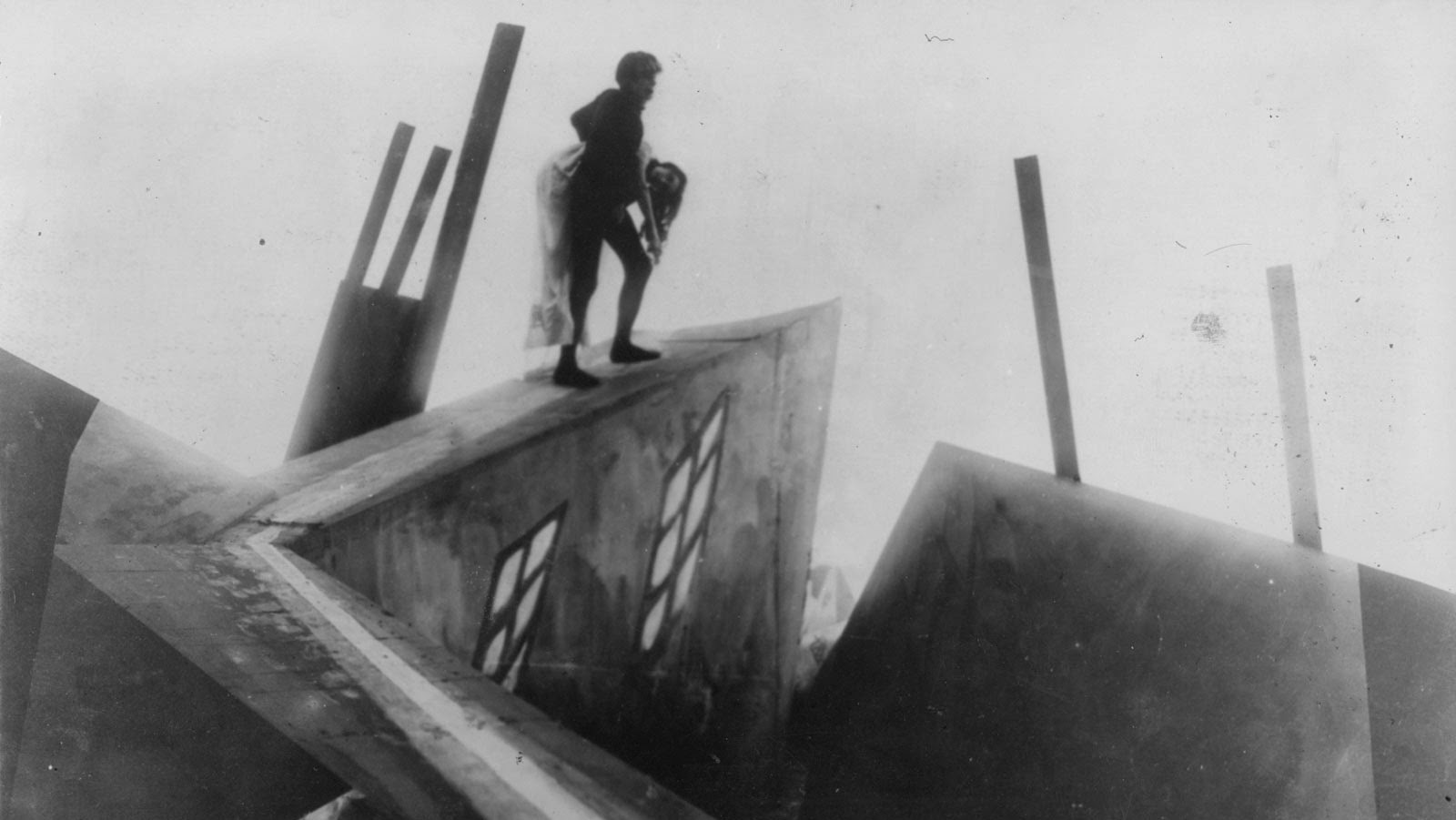 The evening was organised by the QFT’s youth panel Takeover Film and was part of the BFI Gothic season.

To keep up to date with 3epkano go here, and to download their EP of music used to accompany The Cabinet of Dr Caligari (for free!) go here. It is highly recommended that you do.

Lilia Tombs said…
That seems like it was a great screening! This film is one of my favourites from the 20's and, looking at 3epkano's website, they've done some other good soundtracks for films of that era too. Thank you for sharing the link :)
9 February 2014 at 21:25

James Gracey said…
My pleasure, Lilia. It was a greet evening and 3epkano's score was terrific! I'd love to see them play live to a screening of Nosferatu...
11 February 2014 at 18:16

psynno said…
Cheers James! That was a great link to the soundtrack, wish I had a chance to see it projected and scored live. Worth seeing a decent print of it too.
28 February 2014 at 15:46