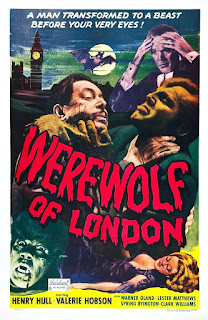 While travelling through Tibet in search of a mysterious flower that only blooms in moonlight, renowned botanist Dr. Wilfred Glendon (Henry Hull) is attacked by a werewolf. When he returns to London, Glendon begins to undergo a terrifying transformation, the only antidote for which appears to be the plant he is researching...

Produced by Universal in the wake of the success of Dracula, Frankenstein and The Mummy, Werewolf of London was the first mainstream Hollywood werewolf film. It established several precedents which later became significant mainstays of werewolf cinema, such as the idea of lycanthropy as a contagious disease, the influence of the full moon on the werewolf’s transformation, and the spiritual torment suffered by the tragic male protagonist as he desperately attempts to find a cure for his monstrous condition. As the eponymous beast, Hull delivers a performance that invites much sympathy; prior to his encounter with a werewolf, Dr Glendon was a man much more comfortable experimenting alone in his lab than socialising at his wife’s parties. After the attack, the internal conflict he experiences, as his intellect and reason become overshadowed by animalistic impulses and bloodlust, propels the narrative as he searches for a cure while trying to maintain control of the transformations.

Interestingly, Glendon retains much of his personality, faculties and moral reasoning (not to mention his sharp fashion sense) when he’s in wolf form – he continues to experiment in his laboratory and at one stage, he even dons a hat and coat before going out into the cold London night (!). One can't help but wonder if this was what Warren Zevon was referring to in his song 'Werewolves of  London' when he sang 'I'd like to meet his tailor.' Anyway, I digress. When he consults an ancient tome on werewolves and demons, Glendon discovers that ‘unless this rare flower is used the werewolf must kill at least one human being each night of the full moon or become permanently afflicted’ and while he struggles to resist the urge to kill, his instinct to survive leads to reluctant and guilt-inducing bloodshed. Conflict also arises when another werewolf attempting to obtain Glendon’s botanical remedy makes its presence known. The make-up effects by Jack Pierce transform actor Henry Hull into a therianthropic man-wolf hybrid, the look of which would be echoed throughout later werewolf films, notably George Waggner’s highly influential The Wolf Man (1941), which further congealed and popularised certain conventions established by Walker's film. 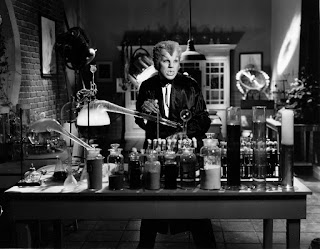 Glendon’s first transformation is effectively conveyed. As he skulks along his shadowy, pillar-lined veranda his beastly changes occur cumulatively; each time he emerges from behind a pillar, he appears ever more monstrous until he is completely transformed. As Glendon attempts to keep his lycanthropy a secret, becoming more reclusive and driving his wife (Valerie Hobson) further into the arms of an old flame, an emerging subtext pertains to drug addiction, and, arguably, closeted homosexuality. Interestingly, Werewolf of London also unfurls as a Frankensteinian cautionary tale which speaks of the potential dangers of scientific advancement – it is Dr Glendan’s hunger for knowledge and his desire to push the boundaries of scientific research that leads him to his doom. Prior to his discovery of the strange flower that blooms in moonlight, he is warned not to venture into the valley where it grows, as one character notes ‘without fools there would be no wisdom.’

Steady pacing, moody lighting and several atmospheric stalking sequences in the fog enshrouded streets of London help to fuel the tension and enhance the somewhat gloomy tone, though there is comic relief in the form of a boozy landlady and her equally sozzled chum. While it is usually relegated to the shadows of more prominent werewolf titles, such as George Waggner’s aforementioned classic, there’s no denying the influence of Werewolf of London, which not only remains an effective and entertaining title, but fascinating viewing for anyone interested in exploring the conventions, tropes and lore of the cinematic werewolf.
1935 Lycanthropy Stuart Walker Universal Horror Werewolf Werewolf of London