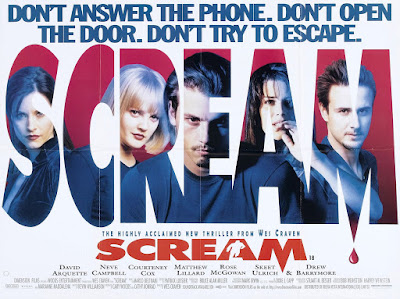 Happy 20th Birthday, Scream! I can't believe you've grown up so fast. I know it’s now 2017 and you turned 20 last year, but you weren’t released in the UK until 1997 so technically it was twenty years ago this year that I saw you. Technicalities aside, I couldn’t let the occasion go by without writing a little something about you on here. I remember my dad taking me to see you at the cinema because you were rated 18 and I was only 16. I wanted so badly to see you though. I was shocked and intrigued by your teaser campaign on TV, and you starred some people who were in things I loved as a 16-year-old (Friends! Party of Five! Boys on the Side!). You were my first experience of watching a horror film in a cinema with a real live cinema audience (they were quite annoying) and I can still remember the excitement and anticipation. I was equal parts irked and enthralled when the audience reacted to you in such a vocal way. They screamed a lot. I thought you were the greatest thing ever, although my dad was very unimpressed and no amount of my insisting 'But it's ironic and post-modern though' would change his mind.

If I had to pinpoint one film that influenced my taste in films (i.e. horror), I'd pick you, Scream. After watching you and noting all your little references and allusions to other slasher films, I watched John Carpenter's Halloween and it terrified me and then there was no turning back. The floodgates opened. I lapped up 80s slashers like Friday the 13th, My Bloody Valentine, Hell Night, Terror Train and A Nightmare on Elm Street, and by investigating your director Wes Craven’s filmography, I found a filmmaker I really quite admired. While he made some really flawed titles throughout his career, he brought an intelligence and a philosophical air to horror cinema that really appealed to me; that, and his penchant for surreal dream sequences. Films like The Last House on the Left, The Hills Have Eyes, Deadly Blessing, The Serpent and the Rainbow and brutal urban fairy tale The People Under the Stairs provided food for thought as much as they provided chills for the spine. Wes Craven’s New Nightmare became an obsession for a while and confirmed, for me anyway, that he was the right person to direct you. And he directed you so well. Your opening scene with Drew Barrymore is an exercise in sustained dread and tension. It’s a landmark moment in horror cinema up there with the opening scene of When A Stranger Calls and the climactic revelation of Black Christmas, to name but two other moments that traumatised me.


You were so successful you single-handedly revived the slasher film. Shortly after your release I was compelled to visit my local video shop (where I also worked, handily. Just like Randy!) and go back to the cinema to check out teen-terror titles like The Craft, I Know What You Did Last Summer, Urban Legend, The Faculty and Halloween H20, all of which have become personal favourites. You also helped inform my taste in music, too. I still love Nick Cave & the Bad Seeds, Moby and, for a few months at least, I listened to a lot of Republica. And you turned me on to Blue Öyster Cult. The interest in slasher films you sparked in me led me to pick up Mark Whitehead’s little pocket guide to slasher movies and Adam Rockoff's Going to Pieces: The Rise and Fall of the Slasher Film, 1978-1986. I read about proto-slasher titles such as the Gothic-tinged body-count of Mario Bava’s Bay of Blood/Twitch of the Death Nerve and Dario Argento’s swanky gialli such as The Bird with the Crystal Plumage and Deep Red, which I eventually couldn’t get enough of. I especially fell in love with the films of Dario Argento. So much so in fact, I wrote a book about them.

Twenty years later I’m still obsessed with horror and even though I own you on DVD, along with your siblings Scream 2, 3 and 4, I always watch you when you’re on TV (you eventually spawned a TV series! Which wasn’t bad!) and I always feel nostalgic for the spring of ‘97. You encapsulate an important era in my life and one I look back upon with much fondness.
American Horror Post-Modern Horror Scream Slasher Teens-in-Peril Twentieth Anniversary Wes Craven

thekelvingreen said…
(1) I cannot believe Scream came out twenty years ago. Something is wrong with time.

James Gracey said…
1. I know! The passage of time is way too bloody fast.

Roman J. Martel said…
Great to read some fond and positive comments about "Scream". For a while there I kept reading how the film ruined horror for a decade afterward. I was surprised by that reaction. So whenever I put "Scream" on my list of favorite horror flicks, I usually wait for some kind of negative backlash. Luckily that seems to be slipping away these days. Now folks are complaining about how asian horror movies ruined Hollywood horror films for nearly a decade. Guess you can't please everyone.
23 July 2017 at 16:44