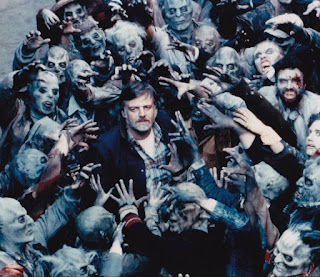 Film director George A. Romero has died at the age of 77. He died in his sleep last night (Sunday 16th July) after a brief but aggressive battle with lung cancer. His agent, Chris Roe, said Romero’s wife and daughter were with him and that he passed away listening to the score of The Quiet Man, one of his favourite films.

As the director of Night of the Living Dead (1968), Romero will be remembered as one of the major pioneers of the modern horror film. A truly groundbreaking work, it took horror out of the realms of the supernatural, away from a far flung Gothic locale and posited it directly on our doorsteps. Released just eight years after Hitchcock’s Psycho (1960) it similarly suggested that horror can exit right next door to us. Indeed, that it is us. Commenting on his vision of zombies as a metaphor for society, Romero commented ‘All I did was I took them out of ‘exotica’ and I made them the neighbors. I thought there’s nothing scarier than the neighbors!’

Prior to Romero’s film, zombies were generally depicted as individuals who had been psychologically enslaved by voodoo (a la White Zombie [1932] and I Walked with a Zombie [1943]). It was Romero who first depicted them as reanimated corpses hungry for human flesh. He once stated ‘I always thought of the zombies as being about revolution, one generation consuming the next.’ Night of the Living Dead spawned various sequels (including the equally lauded Dawn of the Dead [1978]) and countless imitators, few of which managed the thoughtfulness of Romero’s work.

I can remember watching (mostly from behind my hands) Night of the Living Dead on the little black and white portable television in my bedroom late one night. I was maybe 15 or 16, but had never seen a film quite like it. The relentlessness of the siege of the walking dead on the farmhouse, the mounting desperation of the characters within the house and the immensely bleak climax all remained with me for a long time afterwards. Romero not only scares us witless, but he does so in a way that highlights various real social horrors such as the inherent fallibility of human nature, racism, social injustice and inequality.

Eli Roth said it best last night when he commented on Twitter ‘[It’s] hard to quantify how much he inspired me and what he did for cinema […] Romero used genre to confront racism 50 years ago. […] Very few others in cinema were taking such risks. He was both ahead of his time and exactly what cinema needed at that time.’