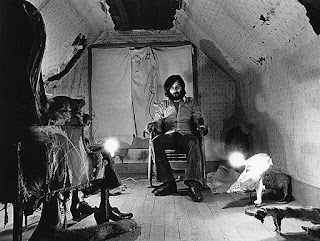 I thought it might be appropriate to share a few words I wrote about Tobe, who passed away yesterday at the age of 74, for issue 20 of Diabolique back 2014…

Tobe Hooper is a name seared onto the landscape of horror cinema. [F]rom classics like The Texas Chain Saw Massacre (a scathing deconstruction of post Watergate/post Vietnam American culture and politics, and a nightmarish study of the breakdown of the family unit), Poltergeist, Salem’s Lot and the underrated slasher flick The Funhouse, to bargain-basement fodder such as Crocodile, The Mangler and Night Terrors – not to mention his plethora of TV work, including I’m Dangerous Tonight and episodes of Dark Skies – [his is] a fascinating, chaotic and unrestrained body of work, throughout which floats a dark, primordial anxiety. When he is on top form, few can muster a sense of stifling, claustrophobic dread better than Hooper; all sense of logic is dispelled and the viewer is plunged into nightmare terrain where almost every outcome is a worst case scenario […] He’s a director drawn to grotesque and carnivalesque characters, and crackpot, outré material; his films have featured such off-kilter and schlocky subject matter as a killer laundry press, a vengeful crocodile, a haunted dress, and sexually promiscuous space vampires. L.M. Kit Carson, who co-wrote The Texas Chainsaw Massacre 2, spoke of the director’s unhinged and gonzo approach to filmmaking, claiming:

“Hooper was a new deal - simply this; no deal… a scare-director, who was methodically unsafe, who the audience just couldn't trust... He'd go too far, then go farther... and go farther again, and kick it again... then get an extra kick, then it's over... then one more kick... No deal, friend.”