Published in January 1818, Mary Shelley’s classic Gothic novel Frankenstein turns 200 years old this month. It tells of Victor Frankenstein, an ambitious young scientist whose highly unorthodox experiments create a living, sentient creature assembled from the parts of stolen human cadavers. Horrified by his creation, Victor rejects and abandons the creature, who eventually seeks revenge on his creator. Mary began writing what would become her debut novel when she was 18. Published several years later, Frankenstein: or, The Modern Prometheus became one of the cornerstones of Gothic literature. With its themes concerning the destructive pursuit of knowledge and dangerous ambition, morality regarding scientific/technological advancement, existentialism and societal isolation, Frankenstein continues to wield incredible influence over literature, cinema and indeed other forms of popular culture to this day.

One of the most fascinating aspects of the novel, for me anyway, are the circumstances that led to its conception. Shelley began to write Frankenstein during that ‘wet, ungenial summer’ of 1816 while she was residing in a villa on the shores of Lake Geneva with her partner Percy Bysshe Shelley, and their friends Lord Byron, Claire Claremont, and Byron’s personal physician, John Polidori (whose story The Vampyre [published in 1819] would congeal the conventions of and help popularise the literary vampire). The summer of 1816 was particularly cold, dark and wet due to the eruption of Mount Tambora in 1815. The resulting plumes of volcanic ash obscured the light of the sun, plunging much of the world into a premature winter. Indeed, 1816 is frequently referred to as the "Year Without a Summer". As the weather was so wet and miserable, the group were unable to enjoy the outdoors, and instead they closed the shutters, lit candles and sat around the fire writing, reading and telling stories. They were particularly inspired, and haunted, by a tome entitled Fantasmagoriana (Tales of the Dead) – an anthology of German ghost stories, translated into French, published in 1813 – and it was when reading this that the group were compelled to challenge each other to write their own tales of the macabre. Mary busied herself to think of ‘a story […] which would speak to the mysterious fears of our nature, and awaken thrilling horror—one to make the reader dread to look round, to curdle the blood, and quicken the beatings of the heart.’

In her Author’s introduction to the standard novels edition, Shelley claims that after all the macabre discussions and stories, she was quite unable to sleep. Upon going to bed, she experienced a sort of waking dream, revealing: I saw—with shut eyes, but acute mental vision, —I saw the pale student of unhallowed arts kneeling beside the thing he had put together. I saw the hideous phantasm of a man stretched out, and then, on the working of some powerful engine, show signs of life, and stir with an uneasy, half vital motion. Frightful must it be; for supremely frightful would be the effect of any human endeavour to mock the stupendous mechanism of the Creator of the world. His success would terrify the artist; he would rush away from his odious handywork, horror-stricken. He would hope that, left to itself, the slight spark of life which he had communicated would fade; that this thing, which had received such imperfect animation, would subside into dead matter; and he might sleep in the belief that the silence of the grave would quench for ever the transient existence of the hideous corpse which he had looked upon as the cradle of life. He sleeps; but he is awakened; he opens his eyes; behold the horrid thing stands at his bedside, opening his curtains, and looking on him with yellow, watery, but speculative eyes. 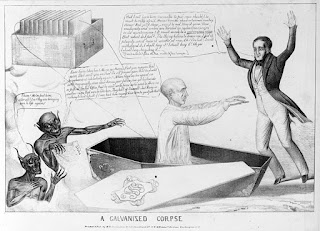 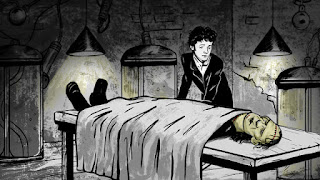 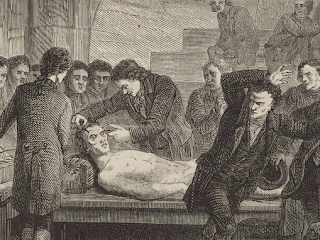 Frankenstein began as a short story, but Mary was encouraged to flesh it out into a novel. Her travels around Switzerland inspired the landscapes in which her story would unfold. Written at a time when science, particularly medical and anatomical science, was making incredible leaps and bounds, galvanism – the stimulating effects of electricity on dissected animals and dead nervous tissue – which was becoming increasingly popular at the time, also formed an important part of the tale, as did the moral quandaries such advancements were conjuring. Various events in her own life, and indeed her childhood, are believed to have influenced Mary’s Gothic tale, too. The idea of a creator’s life coming undone, being ultimately destroyed by the very thing he has created and given life to, has been attributed by various critics to Mary’s own feelings of overwhelming guilt caused by the death of her mother – Mary Wollstonecraft, a writer, feminist philosopher and major advocate for women’s rights - who died shortly after giving birth to Mary. Throughout her young life, Shelley, an immensely thoughtful, ponderous young woman, was often prone to melancholy and morbidity; indeed, it is said she learned to read by tracing the letters upon her mother’s headstone, beside which she would frequently spend time. It was also by her mother’s grave in St Pancreas, London, that the young Mary would secretly met her lover, the poet Percy Bysshe Shelley. Charlotte Gordon, author of Romantic Outlaws: The Extraordinary Lives of Mary Wollstonecraft and Her Daughter Mary Shelley, claims many believe this is also where Mary and Percy were thought to have consummated their love for the first time, by Mary’s mother’s grave.

Percy also shared Mary’s predilection for spending time in and exploring old cemeteries. In his Adonais: An Elegy on the Death of John Keats, Shelley describes the Roman cemetery where his three-year-old son and Keats are buried, noting: 'It might make one in love with death, to think that one should be buried in so sweet a place.' Author Charlotte Gordon also believes Frankenstein is imbued with a need for belonging, and she noted in an interview with the Wall Street Journal that it is a novel about a world without mothers: '[Mary’s] longing for a mother infuses that book—the monster is born without a mother. All the chaos and violence in that book ensues because there’s no nurturing, there’s no mom, there’s no maternal love.' Indeed, the loss of her own first child, a little girl, plunged Mary into a state of deep depression, and she was reputedly haunted by visions of her baby.

Frankenstein would go on to inspire and influence countless other books, plays, films and television shows. The first film adaptation came in 1910, and there have been many, many more since, including Universal’s classic 1931 version. Starring Boris Karloff, this film is perhaps the most enduring of all Frankenstein films – the visual representation of the monster, and Karloff’s portrayal of him as a sort of innocent, misunderstood and childlike being, can be seen in so many other versions and variations. HP Lovecraft wrote his serial Herbert West: Re-Animator (1921-22) as a creepy parody of Shelley’s work, while in 1957 Hammer Horror threw in gore and nudity to break box office records and not only give Sir Christopher Lee one of his first (of countless) memorable starring roles, but herald a period of extreme popularity for Gothic horror cinema throughout the 60s and 70s.

From The Munsters (1964-66), Penny Dreadful (2014-16) and The Monster Squad (1987), to adaptations of varying faithfulness by the likes of Kenneth Branagh, Danny Boyle, Bernard Rose and Roger Corman etc., Frankenstein and its ideas of man’s God complex and the dangers such ambition can present, is as undying, and indeed as relevant, now as it was upon publication 200 years ago.
Frankenstein Frankenstein: or The Modern Prometheus Gothic Horror Gothic Literature Mary Shelley