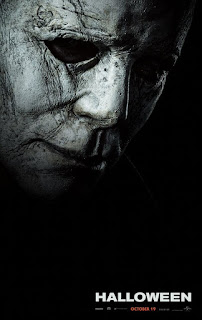 So the new Halloween trailer was officially released today, and you can check it out here. From what we know of this new instalment of the Halloween series, it’s set 40 years after the original, ignores events depicted in all the subsequent sequels (which essentially creates a cool sort of ‘choose your own adventure’ of the series as a whole, with at least three distinct narratives), features the much-loved character of Laurie Strode, now a mother and grandmother, and is being scored (and executive-produced) by John Carpenter himself. Sadly however, he will not be joined by Debra Hill, who produced and co-wrote the original Halloween back in 1978, and whose vital contributions to the film are so often overlooked, as she passed away in 2005. Carpenter and Hill had no involvement with the series past the third film, so his involvement here is hopefully an indication of the film’s credibility. He noted: ‘Thirty-eight years after the original Halloween, I'm going to help to try to make the 10th sequel the scariest of them all’ (1).

I wasn’t going to watch the trailer just yet as I wanted to share my hopes for the film without being too influenced by it, but I just couldn’t wait. It looks great and my hopes for the film are now even higher. That said, trailers can sometimes have a habit of being a little misleading and even a little unrepresentative, especially tonally, of the films they’re promoting. So here are some things that I still hope will be evident in the forthcoming film, things that aren’t necessarily based on the trailer, but on the actual premise itself, which as you know, revolves around Jamie Lee Curtis returning to her role as Laurie Strode, and eventually coming to her final confrontation with Michael Myers, the masked figure who has haunted her since she narrowly escaped his killing spree on Halloween night four decades ago…

Laurie Strode: I hope the new film spends plenty of time with Laurie, reintroducing her to us and establishing her as a fully rounded, fleshed-out character. Halloween: H20 should be commended for doing this, even if the focus frequently shifted to less interesting (though no less likeable) teenaged characters. I hope the new film doesn’t focus all its energy on the stalking and killing of teens - a little diversity please - we're here for Laurie after all - so please let's explore, in a subtle, non-'expositiony' manner, her character, her life and her family. Show us, don’t tell us.


Atmosphere & mystery: Carpenter and Hill’s original film is a classic of minimalist horror that really demonstrates the effectiveness of a less-is-more approach. I hope director David Gordon Green’s film once again relegates The Shape to the shadows and the periphery of a widescreen frame, and maybe even depict him as the darkly playful ‘trick or treater’ he seemed to embody in the first film, quietly stalking the various characters before jumping out of nowhere to kill them - and terrify us. I also hope it evokes some of the eerie beauty of the first film, the look and feel of which is too often overlooked. Halloween was beautiful - all those shots of leafy suburban streets during sunset, the subdued lighting of family homes as living rooms are illuminated by flickering TV sets showing old black and white horror films, and the almost otherworldly blue lighting of the night-time exterior scenes. The use of the steadicam to glide after various characters along quiet streets, or depict the POV of the lurking Shape, was as groundbreaking as it was strangely beautiful. Please take time to establish mood and tension - and then keep it quiet, spooky and tense before letting rip with the terror in the final reel. I don't want a gore fest either. Rob Zombie used an ultra-violent approach with his remake and, while that film and its sequel are not without merit, the violence becomes absurdly numbing and elicits no suspense. 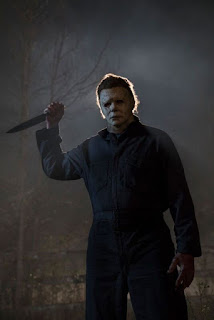 I am optimistic the new film will be more in keeping with the tone of the original, as screenwriter Danny McBride suggested (during an interview for Empire Film Podcast) it will deploy a real back to basics approach: ‘I think we're just trying to strip it down and just take it back to what was so good about the original. It was just very simple and just achieved that level of horror that wasn't corny and it wasn't turning Michael Myers into some being that couldn't be killed. That stuff to me isn't scary. I want to be scared by something that I really think could happen. I think it's much more horrifying to be scared by someone standing in the shadows while you're taking the trash out as opposed to someone who can't be killed pursuing you' (2). In another recent interview (with Charleston City paper) McBride said ‘We're trying to [go for the same tone as the original]. The original is all about tension. Laurie Strode (Jamie Lee Curtis) doesn't even know that Michael Myers exists until the last minutes of the movie. So much of it you're in anticipation of what's going to happen and the dread that Carpenter spins so effortlessly in that film, I think we were really trying to get it back to that. We're trying to mine that dread. Mine that tension and not just go for gore and ultra-violence that you see some horror movies lean on. To us, it was all about bringing back the creep factor and trying to find the horror in your own backyard, in our own homes' (3).

Which brings us to…

Location, location, location: If what Nick Castle, reprising his role as Michael Myers, says is true, I’m hopeful the new film will indeed be ‘very neighborhood-centric' (4). The quiet, mundane and achingly normal suburban setting of the first film was one of its strengths. When the cosy family homes are invaded by Myers, the effect is downright chilling: once secure and safe, these spaces are soon rendered threatening and creepy, with danger potentially lurking in every shadow, behind every piece of comfortable furniture. The idea of a sinister, brutal maniac stealthily stalking through our backyards and side streets, hiding in the trees that line either side of our streets is relatable and therefore incredibly unsettling. I hope the new film depicts an invasion of mundane domesticity and cosiness, and tells its story against a backdrop of tree-lined streets, comfortable, lived-in homes and friendly neighbours. 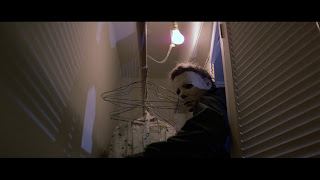 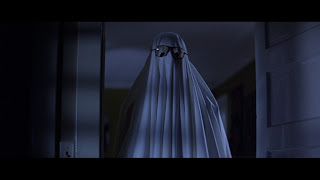 A tight, no frills plot: In his review of The Strangers: Prey at Night, Guardian critic Benjamin Lee put it really nicely when he said of sequels ‘Unlike franchises over-explained to breaking point, the sequel repeats the no-frills plot of the first outing with no further depth – which means that as a film, it needs to work as an engine, primarily, to scare us into submission’ (5). As Halloween 2018 is to ignore all the sequels to Carpenter's original (including Halloween II, which introduced the sibling/family element between Strode and Myers that was spun out through the rest of the films and the remake), there is a sense that the new film can be completely unshackled from the mire the Halloween series eventually found itself wading through, with preposterous (though admittedly enjoyable and comic-booky) plot developments involving druidic rituals, family curses and disheartening plot twists to ensure further sequels (OMG SHE KILLED THE WRONG GUY?!?)

Jamie Lee Curtis said on Twitter: ‘Everybody who made the movie did so because of their passion for John Carpenter and Debra Hill’s original vision. I think you will all be very happy and VERY scared’ (6).

I trust you Jamie Lee, I trust you. And I can’t wait for October.