Under the Shadow is the slow-burning and intensely creepy feature directorial debut of Iranian filmmaker Babak Anvari. It is ripe with socio-political commentary. And utterly terrifying. Utilising a culturally specific entity from Iranian mythology, Anvari confronts uncomfortable truths of certain cultural realities, particularly those experienced by women. By setting the story in Tehran during the Iran–Iraq War (1980–1988), when the city was repeatedly targeted by airstrikes in which thousands of civilians lost their lives, Anvari also addresses the traumatic realities faced by ordinary people living in a war-torn society.

When her doctor husband is suddenly transferred to treat the injured at the frontlines, Shideh (Narges Rashidi) and her young daughter Dorsa (Avin Manshadi) remain at home. As missile attacks on the city occur almost daily, mother and daughter spend long periods of time in the bomb shelter beneath their building. Their relationship soon becomes strained as the stress of living in this violent reality takes its toll. As neighbours continue to evacuate the city, paranoia and suspicion spread throughout the building, as those remaining cling to superstitious beliefs. After the apartment building is hit by a missile, Shideh begins to believe her superstitious neighbours' whispers that a malevolent spirit, a djinn, has begun to haunt the place and is attempting to possess her daughter.

Tension, both domestic and cultural, is apparent from the outset as Shideh is expelled from her studies because of her political activism. Her husband wants her to remain at home as a housewife and raise their young daughter. She becomes increasingly isolated, literally and figuratively, as she struggles with the stifling cultural expectations placed on her as a woman. The various cracks that begin to appear throughout the apartment mirror those that run through her psyche (echoes of Repulsion (1965), and also, though perhaps more superficially, The Babadook (2014), which also holds at its core a strained relationship between a mother and her child), as well as acting as a reminder that they live in a warzone and their building is literally crumbling down around them. The djinn becomes a manifestation of the realities of living in such an oppressive, war-torn society, and of the daily stresses and anxieties that permeate peoples’ lives in such circumstances. It drives a wedge between mother and daughter, with each thinking the other has hidden certain personal possessions (a doll, a book). 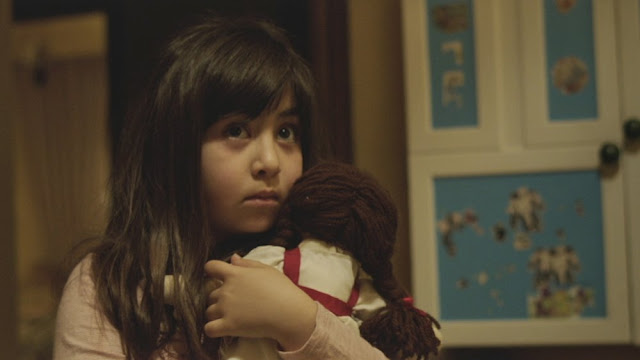 Anvari’s use of sound, or its complete absence, is particularly arresting. According to Iranian folklore, djinns are said to ride on the wind and the film’s atmospheric soundtrack is full of eerie draughts, moans and ominous wind whistles. It creates a lonely, haunting atmosphere that perfectly reflects the isolation felt by Shideh. The apparition, when it is finally glimpsed, is genuinely terrifying and visually echoes certain imagery from Jonathan Miller’s MR James adaptation Whistle and I’ll Come to You (1968).

The final moments of the film act as a powerful commentary on the post-traumatic stress experienced by those who have lived in conflict zones and troubled societies. A part of them will always be shackled to the horrors they experienced and be haunted by it. Under the Shadow is as thought-provoking and astute in its socio-political commentary as it is terrifying and deeply affecting.
Babak Anvari Djinn Folklore Haunting Iranian Horror PTSD Socio-Political Commentary Superstition Under the Shadow War