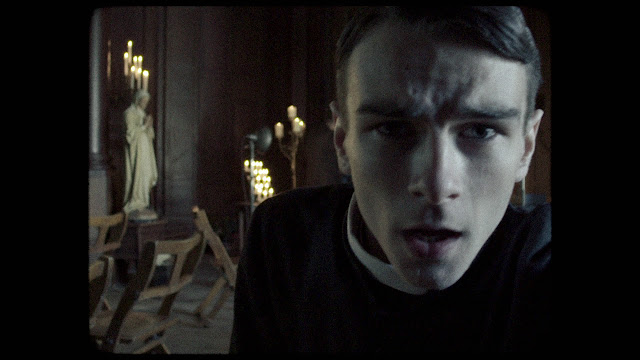 Northern Irish film director Aislinn Clarke’s feature debut tells of two priests sent to investigate an alleged miracle at a remote Magdalene laundry in the Irish countryside. As well as witnessing the shocking mistreatment of the young women incarcerated there, the two men uncover sinister happenings that suggest occult practices and diabolical rituals are afoot. Before long, they realise they are dealing with a genuine case of demonic possession.

Magdalene Laundries were state endorsed workhouses, sanctioned and ran by the Catholic Church. They were cruel and secretive places where Ireland’s ‘fallen women’ were locked away and subjected to forced labour. Many also suffered sexual, psychological and physical abuse at the hands of their custodians. Prostitutes, unmarried pregnant women and mothers, orphans, women with mental health issues or physical disabilities, and women who had suffered abuse were all locked away, deemed to be society’s shameful, ‘dirty secrets’. With the devastating legacy of these hellish laundries still felt throughout Ireland today (the last were only closed down in the 1990s), and the countless abuse scandals the Church attempted to cover up, it is testament to the strength of the screenplay (co-written by Clarke, Martin Brennan and Michael B. Jackson) and Clarke’s assured direction that The Devil’s Doorway never feels exploitative. By looking at such tragic subject matter through the lens of the horror genre, the film uncloaks the very real agonies and terror these young women experienced – and this is actually where the power and true horror of the piece is grounded: in reality, in living memory of the Church’s horrific treatment of these women.

The strong socio-political commentary manifests in the sights of the women working in the laundry and in the heated exchanges between Father Thomas (Lalor Roddy) and the Mother Superior (Helena Bereen). The righteous anger of the older priest, who has become jaded by his failed attempts to change the system from within, contrasts with the younger priest, Father John (Ciaran Flynn), who is ideological and naïve, but no less horrified and powerless when confronted with the very real horror he witnesses in the institution.

While there is no doubt Clarke’s film is a darkly poignant and scathing indictment of the Church’s mistreatment and subjugation of women, it is also a supremely creepy example of found-footage horror. There are a few effective jump scares, but Clarke favours a more slow-burn approach, building up tension until it becomes almost unbearable. She proves deft at creating and sustaining a dank atmosphere, loaded with foreboding, and a deathly serious tone. She also opts for an interesting technical approach and by filming on vintage equipment - 16mm film, complete with light leaks, flares and burned film overlays (which add a nicely infernal feel, particularly when proceedings become more diabolical) – imbues the film with a feeling of real authenticity. Proceedings go full-blown Exorcist at one stage, and some of the scenes involving Father John hearing the disembodied voices of children in the darkened hallway outside his bedroom, only to find the space empty when he goes to investigate, might not keep hardened horror fans on their toes too much, but they remain creepy and engaging due to Clarke's subtle approach. As with other effective found footage horror films, such as The Blair Witch Project, The Borderlands and Grave Encounters, the characters eventually find themselves descending – literally and figuratively – down into a subterranean primal place and the into the very depths of hopelessness where they encounter their deepest, darkest fears.


Finely attuned to the machinations of suspense and horror, Aislinn Clarke is also the Artistic Director of the Wireless Mystery Theatre, a Northern Ireland based theatre group that offers vintage and period style performances with a horror/suspense/mystery and oftentimes literary bent. Keep up to date with her work on Twitter.
Demonic Possession Found Footage Irish Film Northern Ireland Religious Horror Film Supernatural Horror