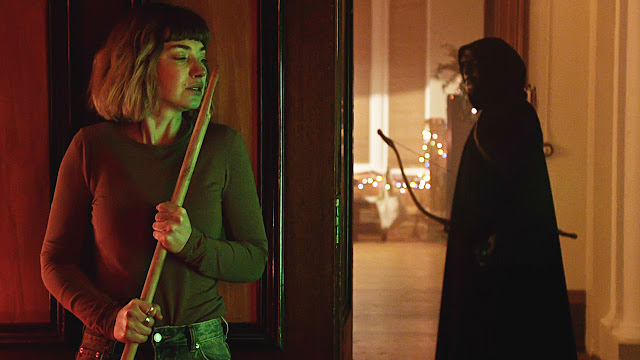 Many horror films have acted as a lens examining the societal issues, fears and anxieties of the times in which they were produced. As Jon Towlson notes in his book, Subversive Horror Cinema (2014), “Horror cinema flourishes in times of ideological crisis and national trauma - filmmakers working in horror - have used the genre, and the shock value it affords, to challenge the status quo during these times.”
Written and directed by Sophia Takal, and co-written by April Wolfe, this loose remake of the classic 1974 slasher of the same name is a socially conscious horror which uses the American college sorority and fraternity systems as a microcosm to examine wider society’s current and historical misogyny. While the basic plot deviates considerably from the original, the tackling of the social issues which form the heart of the story does actually hark back to the original. While Black Christmas (1974) is credited with helping to establish pre-Halloween slasher movie conventions, it also addressed ideas concerning women’s safety on campus, abortion, alcohol abuse, parental neglect, and domestic violence (the calls are coming from inside the house). With the characters already living with all these personal tensions and anxieties, events only become more heightened when a mysterious stalker hides out in their attic and starts killing them one by one.
Takal's direction slowly builds tension as a dwindling group of sorority sisters prepare for Christmas break unaware of the danger they are in. From the opening scene involving a student walking home alone at night and beginning to suspect she is being followed, to the increasingly threatening text messages received by other characters, to the sudden betrayal of the friends by several male characters, Takal and Wolfe tap into very real-life horrors. When Riley (Imogen Poots) realises that something sinister is afoot and several of her friends are missing, tension arises from her not being listened to, not being believed. Many of the threats she and her friends receive are made in plain sight, but not everyone can agree that it's a threat or just a case of ‘fraternity hijinks.’ In Takal and Wolfe’s reinterpretation of the film, the social issues are foregrounded and play an essential role in driving the plot, as the characters gradually discover what motivates their stalker is a will to perpetuate a highly conservative ideology regarding gender roles in society. The script addresses patriarchal power structures from the perspective of the marginalised, and while the danger the young women face isn’t necessarily lurking inside their own house (a la the original), it does emanates from their peer group. 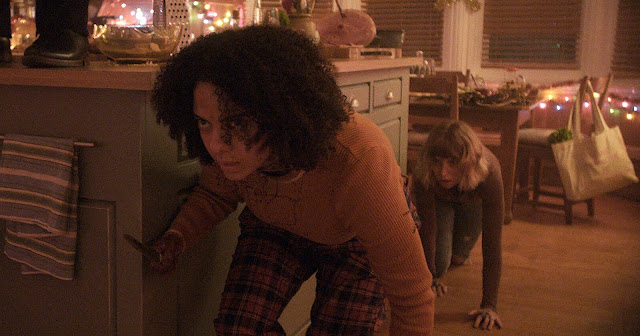 The themes tackled by the film are especially prescient, coming in the wake of the #metoo movement and the demonstrations that followed the killing of George Floyd. Echoes of the Senate Judiciary Committee hearings involving Dr Christine Blasey Ford and Brett Kavanaugh are also apparent, particularly Blasey Ford's claims of being attacked by male students (including Kavanaugh) who went on to become “highly respected and high-ranking members of society in Washington.” The misogyny associated with frat culture is mirrored in the covert initiations and degrading and dangerous hazing rituals Riley glimpses while searching for her friend in the fraternity house.
The slasher trope concerning the ‘return of the past’ is hugely evident in Black Christmas, and a weird (arguably tone-shifting) supernatural angle manifests with the Lovecraftian notion of the past returning to possess the present. There’s an interesting take on the figure of the Final Girl (which echoes the final series of Buffy the Vampire Slayer [1997-2003]) as individuals band together to tackle a common threat in a satisfying climax. While very different from the original, and possessing none of its suggestiveness or nuance, Takal and Wolfe have nonetheless created a decent slasher which attempts to engage with contemporary concerns, say something about feminist issues and still offer viewers a thrilling 'slay' ride.
Feminist Horror Remake Seasonal Horror Slasher Social Issues