Lurking on the Bookshelves: The Dangers of Smoking in Bed & Things We Lost in the Fire 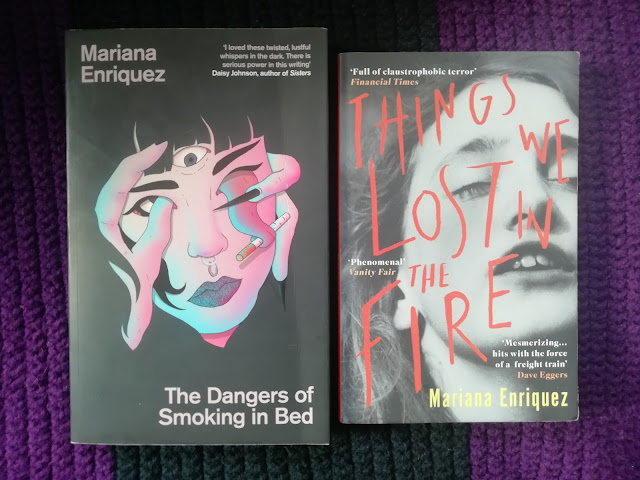 These collections of short stories by Argentine writer and journalist Mariana Enríquez feature creepy, sad, and unsettling tales of spectral homeless children, witches and black mass ritualism, domestic abuse and violence against women. They feature deeply flawed, at times downright unsympathetic characters - usually troubled, lonely, and marginalised lost souls - and self-harm and abuse are recurring themes throughout. Described as ‘a writer whose affinity for the horror genre is matched by the intensity of her social consciousness’ (1) Enríquez’s stories are largely set in present-day Argentina, a backdrop of corrupt government regimes and police brutality haunts proceedings. The political undercurrent speaks of a society haunted by its past, ghost stories informed by poverty, institutional violence, and economic ruin. Among all the very real horror, Enríquez subtly introduces otherworldly, supernatural elements, situating her stories in recognisable reality and mundane domestic settings, before unleashing her remarkable and disturbing brand of horror. Vivid prose conjures a pungent, visceral atmosphere, full of heat, wetness, and odour, while a fascinating and irresistible flavour manifests from the culturally specific aspects of the Latin American setting, peppered with local lore, customs and beliefs.
The author stated in an interview: "When I make horror, I try to make it Latin American. To reimagine the subjects in accordance with our realities, to include indigenous mythologies, local urban legends, pagan saints, local murderers, the violences we live with, the social problems we suffer. Just like Carrie talks about bullying and a school massacre and religious fanaticism—problems that don’t exist on the same scale in Latin America, not because they don’t exist, but because every society has its particularities—I talk about institutional violence, popular beliefs, poverty, economic uncertainty. I try to reimagine common tropes, from cosmic horror to the ghost story, with content belonging to my own history and my own culture." (2)
First published in 2009, The Dangers of Smoking in Bed (published in English in 2021) is a fantastic introduction to the work of Enríquez. Among the twelve stories are ‘Angelita Unearthed’ (the story of a woman haunted by the decaying ghost of her great aunt who died as an infant), ‘Our Lady of the Quarry’ (tension mounts between a group of friends swimming in a quarry pool in the middle of nowhere), ‘Where Are You, Dear Heart?’ (a woman realises she has a fetish for irregular heartbeats which leads to a very dark encounter) and ‘Kids Who Come Back’ (hundreds of missing children reappear out of nowhere, not a day older than when they disappeared, and begin to gather into abandoned houses while an archivist attempts to uncover what happened to them). 2016’s Things We Lost in the Fire continues in a similar vein and includes ‘The Dirty Kid’ (deftly mixes tragic pathos, social commentary and horror as a woman encounters a little homeless boy who may or may not be a ghost), ‘The Intoxicated Years’ (restless teens experiment with hallucinogenic drugs during a government-imposed blackout) and ‘Adela’s House’ (three children become fascinated with a derelict house in the local neighbourhood. Upon entering the house, one of them is never seen or heard from again...).
If you’re an admirer of visceral, literate horror with an emphasis on intense imagery, flawed characters and unflinching social commentary, Mariana Enríquez’s short stories are for you.
References:
(1) https://lithub.com/mariana-enriquez-on-political-violence-and-writing-horror/
(2) http://www.latinamericanliteraturetoday.org/en/2020/may/%E2%80%9Ci-see-myself-latin-american-writer%E2%80%9D-interview-mariana-enriquez
Books Literature Short Stories