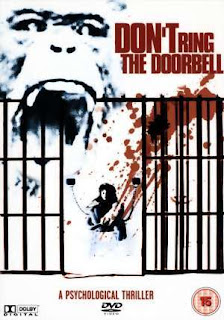 AKA The Mafu Cage
Deviation,
My Sister, My Love
The Cage

Two sisters, level-headed astronomer Ellen (Lee Grant) and mentally unstable and highly volatile Cissy (Carol Kane) share a crumbling mansion together.
Since the death of their father the siblings have lived in a darkly co-dependent and quite isolated relationship that can only lead to tragedy. Ellen’s only interaction with the outside world is through her work as a researcher at an astronomy lab. Even this seems to be a lonely life outside of her home. Cissy meanwhile spends her days sketching various primates she has been keeping in a cage. She refers to them all as Mafu. When she grows tired of them, she kills them. It becomes apparent that Ellen keeps replacing them for her, despite the fact that she knows it is Cissy who kills them. The only other person in the lives of the two sisters is their godfather Zom, who stops in from time to time to humour Cissy and console Ellen.

It was whilst browsing in one of Belfast’s many discount shops I came across this obscure title and as soon as I read the blurb and noticed that it not only starred Carol Kane, but that it was also based on a play, I parted with a whopping £2 and scurried off home to indulge myself. Don’t Ring the Doorbell appears to be one of those films that has been cheaply released with a random, tacked on title that actually has very little to do with the film itself. This was originally released under the title The Mafu Cage, a much more appropriate title given the subject matter. I don’t know who is being urged not to ring the doorbell, or why, but this bizarre title has no bearing on the story whatsoever, instead it serves as a much more exploitable title for what is otherwise quite a thoughtful and unsettling melodrama. Having said that, I guess it was down to the cheap and oh so bad title that drew my attention to this particular DVD amidst all the Shark Attacks, Creature from the Black Lakes and Dolph Lundgren titles also on display. Fickle, I know. But hey, on with the review!

Don’t Ring the Doorbell, is a hybrid of feminist angst and psychological horror. Shades of Roman Polanski’s Repulsion shine through in the film’s depiction of a vulnerable and highly unstable young woman undergoing a complete mental breakdown. There is also a touch of Whatever Happened to Baby Jane in the tale of two oddball sisters fading away into madness in their secluded and ramshackle house. Cissy stalks through the house to tribal music, dressing up and dancing. Her room is covered in exotic plants, African relics and various tribal masks showcasing her complete submersion in primitive culture. She often whips herself up into a worrying frenzy and even her sister has difficultly in calming her again. Ellen is portrayed as the ‘normal’ sister, what with her being quite prim and all. It is obvious that at times she is resentful of her sister’s condition and the fact that their father made her swear to always look after Cissy, despite the fact that she needs psychiatric help.

‘I don’t know how to talk to people, living or dead.’

The relationship between Ellen and Cissy forms the core of the story. Their relationship is at times highly ambiguous. They are shown sharing a bed and at times, Cissy seems a little too familiar with her sister. A definite incestuous subtext lurks within the story and coats the film in an uneasy atmosphere and renders it totally stifling. Things become increasingly tense when Cissy overhears Ellen talking about her colleague and potential love-interest David. It becomes clear Ellen has been deliberately distant with David, but secretly harbours the desire to embark on a relationship with him.

Events take a drastic turn when Ellen leaves Cissy alone at home to embark on a business trip and David unexpectedly calls at the house. He soon sees why Ellen was so secretive. By the time he realises that Cissy is clearly insane, it is far too late. He is initially intrigued by her curious manner and she plies him with wine. She manages to persuade him to allow her to chain him up in Mafu’s cage (the fool), and eventually beats him to death. This is the part of the film that events seemed to be leading up to, however they are far too briefly executed to create much impact.

The obvious metaphors of caged animals that are untameable, are rife throughout the film. Ellen is essentially Cissy’s keeper. The bizarre and highly atmospheric tribal score evokes heat, danger and the fact that the wild and untamed nature of Cissy is constantly simmering under the surface of proceedings, ready to erupt like the random shots of solar flares inserted into the narrative. The scenes featuring the chained Mafu are unsettling and uncomfortable. Mafu might be the wild animal, but it has nothing on Cissy. The scene where she beats the poor creature to death is shocking and intense. Kane’s performance is startling and the sight of Cissy in full tribal garb and lurid red body paint is memorable, to say the least. When she delicately wraps Ellen’s body up in her hammock the moment is unsettling in its quiet morbidity.

One of the most striking shots features Cissy submerged in her bathtub, the water around her, blood-red and livid. This simple moment perfectly encapsulates how she has been utterly consumed by, and immersed in, her own blood-dark insanity. 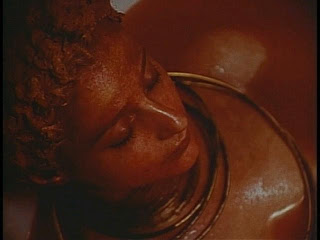 At times it is obvious this was based on play. The limited sets and stagey direction is detached and uninvolving. Everything appears to be open to interpretation – from the stifling relationship of the sisters, to the reasons why Cissy views people, particularly men, as no better than her shackled primates. Unfortunately most of the events, particularly towards the end of the film, play out under almost complete darkness. This ensures that it is quite hard to follow. The performances of the two leads however, are strong and convincing throughout.

While Don’t Ring the Doorbell was not quite engaging enough to create the impact it was striving for, that’s not to say it isn’t worth checking out. Part horror film, part psychological study, the film also hasn’t dated very well, but remains an intriguing and obscure little oddity with a highly unsettling, if rather predictable denouement.
Adaptation Carol Kane Don't Ring the Doorbell Eric Wesphal Feminist Horror Psychological Horror Seventies Horror The Mafu Cage Theatrical

Matt-suzaka said…
To be totally honest with you James, I kinda dig the title even if it doesn't fit the movie! Kinda reminds me of the Edgar Wright 'Don't' trailer from Grindhouse!

The title really tells you a whole lot about movie marketing throughout the years, popular movies yield marketing techniques meant to draw in that same crowd for another movie. Even if the title doesn't fit the that particular film.

I have never even heard of Don't Ring the Doorbell, but it sounds very interesting for the most part. Plus I love Carol Kane and many of the roles she had played in her hey day. That is certainly a big draw for me, so thanks for reviewing this one!
11 June 2009 at 06:30

James Gracey said…
I hear you, amigo. I also dig the title - it was what caught my eye whilst flicking through SO many discount DVDs... That I seeing Carol Kane's name. It was all abit emotional really ;)

Edgar Wright's trailer was inspired by the retitling of crusty old euro-horror films when they were released in certain territories. Amazing how many of the new titles actually utilised the word 'don't' in a vaguely cautionary sentence that had nothing to do with the film... Another brilliant example is Let Sleeping Corpses Lie AKA Living Dead at the Manchester Morgue. It was renamed Don't Open the Window!?! The mind boggles...
12 June 2009 at 15:52