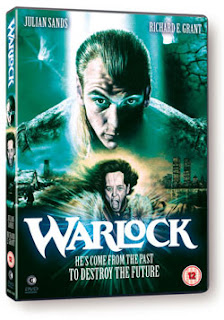 Moments before he’s set to be burned alive on a pyre of kitties, an evil warlock (Julian Sands) uses the dark arts to transport himself from 1691 Boston to 1991 downtown LA, in order to escape the flames and track down the Satanic bible, which he hopes to use to bring about Armageddon.
Fortunately, ‘Warlockfinder General’ Giles Redferne (Richard E Grant) is hot on his heels. They crash into the life of sassy chick Kassandra (Lori Singer) who is subsequently cursed to age 20 years a day until the warlock is apprehended.

While immensely trashy, Warlock also takes itself very seriously, which is probably its saving grace. A number of striking ideas pepper the schlock, and it's interesting to see how writer DT Twohy mingles medieval superstition with more contemporary ‘old wives tales’ and practices, and a healthy dose of Eighties sass.

Dr Blood said…
I rewatched this myself only a couple of weeks ago. Still a great role for Richard E. Grant and Julian Sands was better than usual too.
21 April 2011 at 05:24

James Gracey said…
This was the first time I'd ever watched it all the way through (I saw bits and pieces on TV when I was younger) and I really liked it. Good fun with a smattering of cool ideas throughout. And yes, the cast was excellent!
21 April 2011 at 11:34

Franco Macabro said…
Saw this one about a year ago along with its sequel. The first one is way better, it doesnt go into Star Wars territory like the second one.

This is a gory one, the kind of gore we dont see in horror movies anymore.

I liked the way the film opens, with the Warlock floating in the air of the dungeon he is trapped in, what a way to open a movie!

Hey did you catch some similarities with Hellraiser? Especially in that re-birth sequence?
21 April 2011 at 18:09

James Gracey said…
Yeah, there are some similarities with Hellraiser now you mention it. Both films were made around the same time, weren't they? The Horror Channel recently showed the first two Hellraiser movies again - they still stand up! Really intelligent, gruesome stuff.

Shaun Anderson [The Celluloid Highway] said…
This film only serves to remind one of what an utter nonce Julian Sands was...that pony tail is unforgiveable. I've never been convinced by a Sands acting role, if you haven't seen it already James check out Ken Russell's GOTHIC...beyond repulsive. Considering the complete dross Steve Miner had previously directed, this has to be considered his best film.
6 May 2011 at 23:06

James Gracey said…
Shaun I sense some animosity on your part towards Mr Sands! I actually quite like the guy, and I thought he and Richard E Grant were superbly entertaining in this, Mr Miner's finest hour. Or was that Lake Placid? Or Friday the 13th Part II. Damn, he's delivered so many classics. I bet you're a Forever Young man, yourself. Am I right? ;)
7 May 2011 at 12:40

James Gracey said…
PS I shall check out Gothic on your recommendation! I've heard bad things, but I love the idea.
7 May 2011 at 12:41

Shaun Anderson [The Celluloid Highway] said…
Yeah Richard E. Grant is wonderful in this. It's not a difficult task to think of woeful performances by Mr. Sands - another one is the Stephen King mini-series ROSE RED. And I surely need not go down the route of PHANTOM OF THE OPERA.

James Gracey said…
You're absolutely right Shaun! No need at all to wander down the shame-sodden route of Phantom... ;)