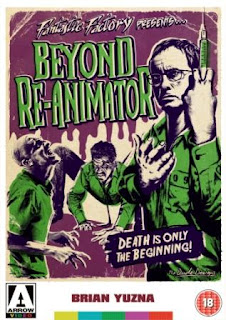 Surviving the collapse of the crypt he was cornered in by a horde of his reanimated corpses, Dr Hebert West continues to conduct his grisly experiments. He is eventually arrested and imprisoned but continues his research. When a young doctor named Howard Phillips begins work at the prison, he teams up with West to help bring his experiments to the next level. Hell breaks loose and copious blood is spilled when several of the reanimated corpses break free and wreck havoc in the prison. Creative carnage and grisly mutations ensue.

Stuart Gordon’s progressive and splattery adaptation of HP Lovecraft’s Herbert West: Re-Animator was one of the defining horror films of the Eighties. Fiercely independent, unconventional, awash with splashy effects and boasting the darkest, severed tongue-in-cheek humour imaginable, Re-Animator still wields its grisly power and effectiveness today. It was followed by the Brian Yuzna directed sequel Bride of Re-Animator, which while nowhere near as original or daring as its predecessor, still had its fair share of jaw-dropping spectacles. Yuzna returns to the director’s chair for this, the third, arguably weakest but still great fun instalment in the series thus far. 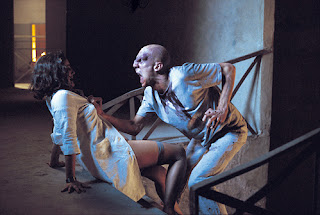 While certain scenes really revive the spirit of the original, the film still pales in comparison. In many ways it simply retreads events from the original with West immersing himself in his amoral experiments at all costs, while his idealistic and naive assistant becomes involved with a woman whose death and subsequent reanimation pushes him over the edge. Setting the story in a gloomy prison adds an air of claustrophobia and tension – West’s fellow prisoners are a nasty bunch that poses as much of a threat to him as his reanimated monstrosities do. When the inevitable guts begin to hit the fan and slosh across the screen, Yuzna delivers a plethora of eye-widening set pieces and astounding special effects, and the film, at last, really hits its stride.

Highlights include the opening scene, when several youngsters are menaced by a jawless zombie in their leafy suburban home, the appearance of a reanimated torso swiftly closing in on West, and the closing credits sequence boasting the unforgettable sight of a rat tussling with a reanimated dismembered penis. No, really!
The very likable Elsa Pataky and Jason Barry help give the film a little warmth, but the undisputed highlight of the film is Jeffrey Combs as the irrepressible Herbert West, and even though he isn’t given enough to do, when he is onscreen and delivering his lines in that inimitably drool and emotionally detached manner, he has real presence and wry charisma. 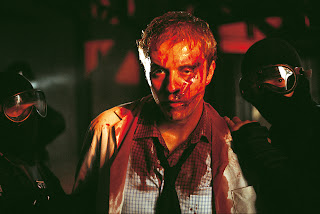 Beyond Re-Animator is a fun, gore-sated ride for fans of the prior instalments of the series. While it hasn’t radically revitalised the splat-schtick of the original or done anything stunningly original, it still possesses the sick charm and messy joy de vivre you’d expect it to. Plus its got Jeffrey Combs in it!

Beyond Re-Animator was produced by Brian Yuzna’s Spanish film company Fantastic Factory, a company set up with Julio Fernández to produce modestly budgeted genre films for the international market using international genre talent as well as local talent. The lovely folks over at the ever-amazing Arrow Video have gathered together a collection of Fantastic Factory’s output in one beautifully packaged boxset. It serves to highlight the work of an interesting production company and often overlooked filmmaker, Brian Yuzna, whose work, while sometimes uneven, could never be accused of not being interesting. 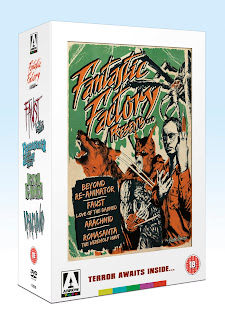 Special features on the Beyond Re-Animator disc include:

Unknown said…
Nice looking set and well written review to boot! While the first is still king for me, I have a lot of respect for BEYOND. Especially for it being a much darker film. In some ways, it looks and feel like a completely different animal. Which was a ballsy move, for sure.
27 April 2011 at 07:46

James Gracey said…
On reflection, you're absolutely right MondoHeather. Beyond is a much darker film and while it is arguably a lesser film than its predecessors, it still made some brave moves. It is also one of the more interesting sequels to be produced, even if it is a slight retread of the first film. And its got Jeffrey Combs in it! :)
27 April 2011 at 11:51

Aylmer said…
I guess my expectations were set too high for this, haha. When Gordon's sequel with William H. Macy fell apart I was HEARTBROKEN. What was it gonna be called again? Was it House of Re-animator?
28 April 2011 at 11:24

Lazarus Lupin said…
I think Yuzna is underappreciated. He has never really hit a home run but he always at least gets a double and they are almost always in one way or another very interesting.

James Gracey said…
Aylmer I couldn't agree more. His work is always so off the wall and interesting. A true oddball! Even schlock like The Dentist and Faust: Love of the Damned had their moments. I'm not sure what the story is with Fantastic Factory, but it would be great if they started producing stuff again soon.

Lazarus: I read something somewhere a while back about House of Re-Animator; had no idea William H. Macy was attached to it though! How cool would that be?! Let's hope something comes of it. I reckon there's room for another Re-Animator movie (or two)! ;)
2 May 2011 at 10:07