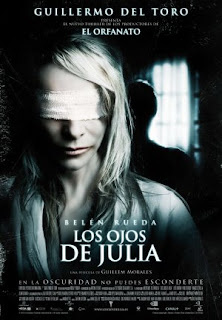 Julia (Belén Rueda) and her twin sister suffer from a degenerative disease that will eventually leave them blind. When her sister is found hanging in the family basement, everyone but Julia assumes that she committed suicide. As she begins her tender-footed investigation to determine the true cause of her sister's death, Julia is sure that she is being watched, but she cannot see her observer. Is it a distorted result of her failing eyesight or is she only imagining things? Or could it be that the man she believes is watching her every move is invisible? Increasingly isolated after an operation – a last ditch attempt to save her sight - Julia’s nerves are fraught and her psyche seems to be completely unravelling. Is it merely her imagination getting the better of her, or is her sister’s mysterious killer now toying with her too?

Julia’s Eyes is a dark and engrossing thriller that initially looks set to unravel as a vaguely supernatural spook-show mixing elements of The Eye and Wait Until Dark. However, it soon becomes clear that Guillermo del Toro’s new protégé, director Guillem Morales, is telling a story all his own. Skilfully weaving together themes of blindness and invisibility to terrifying effect, at its heart, the film is about a woman’s struggle to come to terms with the loss of her sight. Morales frames this concept tightly within the horror genre however, and through precise camerawork that enhances the suspenseful atmosphere, he places us right in Julia's situation and we experience the movie from her perspective. The director deploys unnerving camerawork that distorts our vision as much as Julia’s, and much of the time, we only see what she sees. Or thinks she sees. Characters waft in and out of frame without us ever seeing their faces. At times the screen is plunged into stifling darkness, at other times the mere dimming of the lighting by a fraction in various scenes to convey Julia’s own failing vision, has us rubbing our own eyes and straining to peer into the dark corners and peripheral spaces onscreen (and perhaps off-screen!) in search of the vaguest hint of threat. 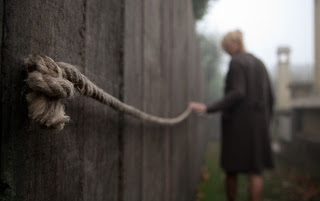 Themes of sight, seeing, visibility, invisibility, identity and how others perceive us – if they even notice us - give the film greater scope and at times it is glowingly unconventional and thought-provoking. The terror and frustration of having our worlds plunged into perpetual darkness and not being able to perceive those around us is effortlessly conveyed, not only through Morales’ visual trickery and moody atmosphere, but also Belén Rueda’s (The Orphanage) touching performance as the central character. She carries the film and we believe in her, willing her to find answers before it is too late. The scenes in which she returns home, blindfolded after her operation, and under strict instruction not to remove the bandages, unflinchingly depict her attempts to familiarise herself with her new, dark world. Rueda gives a raw performance of a strong woman reduced to helplessness with heartrending assuredness. 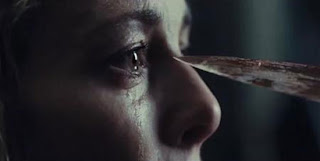 After all the tantalising, unsettling intrigue however, some may find the film’s climax to be a rudimentary affair relying too heavily on genre convention; especially given the expertly crafted mystery of the first half. Morales has more than a few nasty surprises up his sleeve though. The amalgamation of influences he draws upon include Asian horror imagery, the Italian giallo (including one moment of eye-trauma that would make even Argento and Fulci wince), good old fashioned Hitchcockian suspense and lashings of dark psychological perversion, which all make this a rich, intriguing, gripping and eventually unexpectedly moving film; images and moments of which will singe themselves onto your retinas for some time to come. Be afraid of the dark. Be very afraid.
Blindness European Film Giallo Grief Psychological Horror Spanish Horror

Ross Horsley said…
Great review -- I liked this film a lot too. Looking back on it, it feels like so much happened. It's one that takes you on a real journey, and it's gripping as hell!
8 June 2011 at 11:17

James Gracey said…
Thanks guys. Christine and Dr Cyclops, I really hope you both get a chance to check out this film soon - it really is very good. I hadn't heard too much about it before I saw it, and that helped. I didn't know what to expect. It's terrific!

Ross, I know what you mean about feeling like so much happened! Great idea and great storytelling; so gripping.

Aaron said…
I've been highly anticipating this one despite not knowing much about it; the title, the fact that it's a new horror/thriller from Spain, and the claims of it resembling a modern-day Giallo are all I need to know. Great review and very similar to the only other one I've heard, so now I'm definitely looking forward to it.
9 June 2011 at 10:11

Unknown said…
That's a great review, I have to confess I completely missed this one. Nowhere near my radar. I love the motif with the cinematography. I wish there was more Detectives (loose use of the word) with failing senses, the tragedy there is so beautiful.
25 December 2011 at 02:24

James Gracey said…
Thanks John. The cinematography was ravishing, wasn't it?? There were so many irresistible similarities between this and the Italian gialli of the Seventies. Which is a good thing in my book.
30 December 2011 at 11:25

Anonymous said…
Great review, I tried to write one at IMDB but you formulated my thoughts much better than I did myself. A great movie by a promising director, and a great, well thought review.
3 January 2012 at 01:40