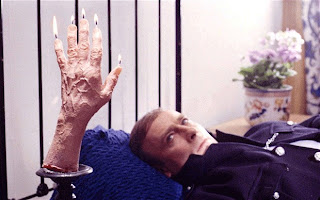 Why not pick up the latest issue of Paracinema while you’re there? Amongst its lurid delights are articles such as Panic in Detroit: RoboCop and Reagan’s America by Andreas Stoehr; Blood on the Rubber Chicken: Horror Parodies of the Early ’80s by Mike White; and Peter Jackson’s Heavenly Creatures from Hell by Todd Garbarini. All great stuff, written by hardcore fans of genre films for hardcore fans of genre films.
Audiodrome Film soundtrack music Paracinema Magazine Score The Wicker Man

movies left for dead said…
i prefer the original because it is more bizarre! see my reviews of bizarreness at my bloody bloggy moviesleftfordead dot com woooo!
17 February 2012 at 05:46