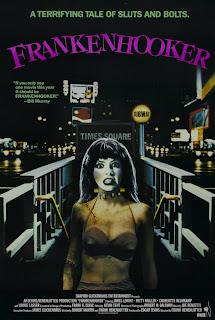 When his fiancée is decapitated in a freak remote control lawnmower accident, medical student Jeffrey Franken sets out to build her a new body made up of Manhattan prostitutes and zap her back into life... These broads are tough cookies though, and the only way Jeffrey can get his hands on a dead one is by using his latest invention, Supercrack; a lethal cocktail of drugs designed to make the user explode. Yup. You read that right. Explode.

In case that synopsis leaves you in any doubt, Frankenhooker is a sleazy, trash-fest of splashy splatter effects, ludicrous body-horror, gratuitous nudity and cartoonish violence. In other words, it’s a damn good time. Prior to Frankenhooker, Henenlotter was responsible for such cheap and cheerful grot-fests as Basket Case 1 and 2, and Brain Damage; scuzzy, low-budget exploitation flicks boasting freakish, strangely sympathetic characters engaging in all manner of seedy doings on the fringes of society. High on subversive imagination and morbid wit, his work may be exploitative trash, but its great exploitative trash; and certainly more provocative and entertaining than the majority of films currently in your local multiplex.

The New York backdrop of Frankenhooker is as sleazy and gritty as you’d expect, and Henenlotter has fun with the carnival of colourful characters that populate it; hookers, pimps, junkies, drag queens and all manner of other grimily exotic deadbeats. The bulk of the film basically acts as an elaborate set up, in which Jeffrey (James Lorinz from Street Trash) hatches his perverse plan - while treating his fiancée’s severed head to candlelit dinners and fine wine no less - and his attempts to obtain the body parts he needs to rebuild her. Cue lots of naked exploding prostitutes and scenes featuring gory body parts flying through the air. When she’s finally resurrected, the sight of the stitched together, bikini-clad Elizabeth (Patty Mullen) staggering through Times Square is worth the wait. Barking and slurring lines like “Want a date?” and “Got any money?” in a thick New York accent, she proceeds to turn a few tricks with morbidly hilarious results, as Jeffrey rushes frantically to find her and take her back to his lab. 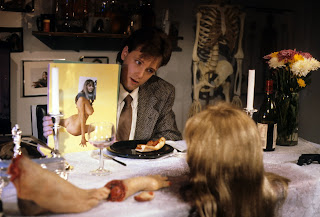 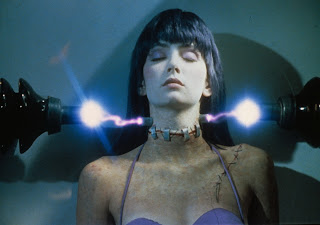 Were it not for the fact that its all so ludicrous and over the top, Frankenhooker could be seen as a misogynistic piece of grindhouse that views women as no more than the sum of their separate body parts. Henenlotter’s darkly twisted humour, impish enthusiasm and sly social commentary shine through though, and Frankenhooker emerges as a tongue-in-cheek, freakishly trashy retelling of Mary Shelley’s cautionary classic. Henenlotter’s style is quite similar to the likes of Stuart Gordon and Brian Yuzna, and comparisons with the likes of Re-Animator and Society are inevitable; particularly in the last scenes when the severed body parts Jeffrey has been storing in a vat of his life preserving elixir begin to merge and take on grisly lives of their own. Despite the low budget, the special effects, as elaborate and ridiculous as they are, still look great.

systemshocks said…
Great review, James. I agree with what you say about the similarities with Stuart Gordon and Brian Yuzna in their use of twisted humour and social commentary. I also found Patty Mullen's performance oddly touching this film! Did you see Bad Biology?
12 January 2012 at 13:34

James Gracey said…
Thank ye kindly, Jon. Alas, when I attempted to watch Bad Biology it was quite late at night, and rather a lot of wine had been appreciated. I fell asleep. I was shocked and horrified (in a good way!) at what I saw before I began to study the back of my eyelids though, and I really want to try and watch it again. It kinda reminded me of Sewage Baby, with its highly unsavory subject matter and trashy aesthetics.
12 January 2012 at 18:44

James Gracey said…
PS I also really liked Patty Mullen in this. The right amount of humour and odd pathos.
12 January 2012 at 18:45

Unknown said…
Great review, I can't help but love Henenlotter. There are a lot of similarities to Yuzna but he also has the lack of concern with regards to offending that John Waters has.
12 January 2012 at 19:30

Girl on Gore said…
Oh I love Frankenhooker! Every year I say i'm going to be her for Halloween but I have yet to follow through. Great review!
17 January 2012 at 02:51

Franco Macabro said…
One of my favorite Henenlotter films, so much fun. So totally nuts! This is really what I enjoy the most about these films, how over the top they are. I mean, whores on exploding crack??
19 January 2012 at 21:33